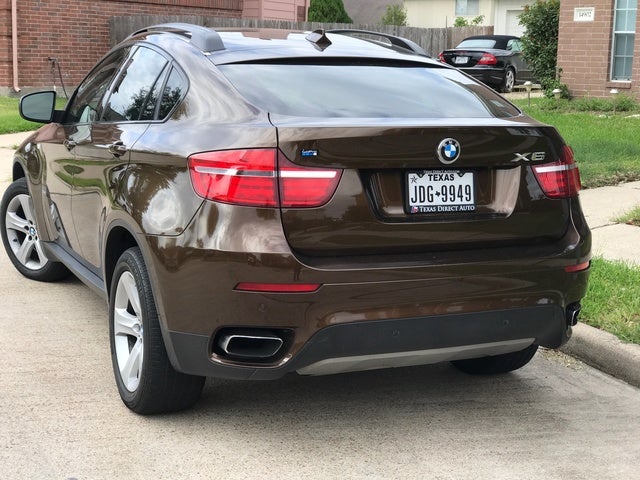 Controversial? Yep. Practical? Somewhat. Making money? Surprisingly, yes. Despite its somewhat polarizing nature, BMW’s unique X6 “Sport Activity Coupe”—a misnomer if there ever was one—returns quasi-triumphant for 2013. Since its debut some three years back, this oddball 4- or 5-passenger coupe-that-isn’t has been causing a bit of havoc among reviewers who find it to be difficult to classify in the accepted vernacular. Is it a luxury coupe? No, it’s a 4-door, but it handles almost like a coupe. Is it an SUV? Nope, but it has nearly the practicality, with split-folding rear seats that give it some 59.7 cubic feet of cargo space. It can also tow up to 6,000 pounds of trailer when properly equipped, and now offers brand new standard LED taillights and a refreshed fascia and grill, while new adaptive LED headlights, nappa leather and the highly anticipated M Performance Package are among the added options for 2013. Again, two trims, the xDrive35i and the xDrive50i, grace the more staid version of this hard-to-define auto. Both trims, obviously, come with BMW’s xDrive intelligent all-wheel-drive (AWD) system with Dynamic Performance Control, and both, as befits the Beemer tradition, are delivered with plenty of standard bells and whistles. Finally, look for the sporty Porsche Cayenne and BMW’s own 5 Series, each a sport-oriented SUV, to give the X6 some hefty competition, utility-wise, while just about any legitimate coupe will match or beat it for agility.

No matter its perceived shortcomings, both X6 trims come loaded for bear. The xDrive35i once again will boast a 300-hp turbocharged 3.0-liter V6 that combines with the standard 8-speed shiftable automatic transmission (with steering-wheel-mounted paddle shifters) for 300 lb-ft of torque. This peppy drivetrain features a brake hill holder and descent control, along with a center and rear limited-slip differential and mechanical center differential managing an “intelligent” AWD system that’s designed to be predominantly rear-wheel-drive (RWD) until slippage is detected, when torque gets automatically and instantaneously directed to the front wheels for the needed extra traction. Look for 16 mpg city/23 highway from this potent six-banger with direct injection (DI) and variable valve timing (VVT). Also, look at filling up with only premium unleaded gas.

The xDrive50i, meantime, is again expected to be delivered with a twin-turbo 4.4-liter V8, again with VVT and DI, and again with the 8-speed shiftable automatic. Expect 400 hp and 450 lb-ft of torque from the V8, while mileage slips noticeably to 14/20, again using only premium unleaded.

Both the xDrive35i and the xDrive50i arrive in showrooms with pretty much the same standard appearance, comfort and convenience goodies. Outside, look for 19-inch alloy wheels, a power sunroof, power liftgate and trailer wiring, while alloy and wood accents, leather upholstery and heated, power-adjustable seats adorn the cabin. Once again, expect remote power door locks, power windows and heated, reverse-tilt power-adjustable outside mirrors, with the windows (and sunroof) capable of remote operation. Some expected convenience items should once more include cruise control, as well as front and rear parking sensors, while dual-zone climate control, Sun Sensor technology and memory for driver's settings do their utmost for occupant comfort. Finally, entertainment is via a standard 205-watt audio system that boasts an MP3-capable single-CD player and 10 speakers with 2 subwoofers.

Look for the top-end xDrive50i to toss in some added seat-adjustment settings, as well as a universal remote, Bluetooth hands-free communications and BMW Assist, with driving directions and enhanced communications, all of which are optional for the 35i.

Further options for both trims in 2013 should include the new M Performance Package, with 15 more horses and 30 more lb-ft of torque (315/330 in total) out of the 35i’s V6 trim, and 40 hp/30 lb-ft (440/480 in total) from the 50i’s V8. Also look for upgraded and/or upsized wheels in this heady new package, not to mention unique black exterior paint, 20-way adjustable sport front seats and Beemer’s Adaptive Drive system featuring electronically damped shock absorbers and active steering.

As for other notable options available in various packages or as standalones, expect upgraded audio, a heated steering wheel, rear-seat DVD entertainment, a rear-view camera with Top View, a windshield-displayed head-up display and a center second-row seat. Additionally, look for unique cabin accents and colors, as well as the just-introduced nappa leather upholstery upgrade and the popular BMW Apps iPhone interface system to be available in both trims.

800barker Thank you for all the shopping tips . Just purchased day X6 . A great vehicle so far . Thanks to you I did all the shopping on my iPad and cell phone . You gave me all the tips I need to purchase a new vehicle . Thank you for making things convenient for me because I'm a busy man . When I needed the locations mileage photographs internal and external they were all there . You are a great website keep the good work up . Thanks again

Users ranked 2013 BMW X6 against other cars which they drove/owned. Each ranking was based on 9 categories. Here is the summary of top rankings.

Four doors top car cost all the to Nairobi Kenya

A BMW x6 question up to Nairobi Kenya