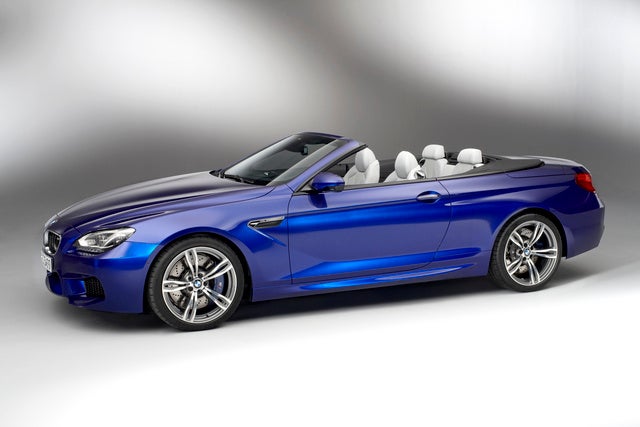 Big brother M6 follows little brother M5, and that’s good news for M6 fans, as the M5 has gone through some lovely changes of late. Sure, things just keep getting bigger and longer and wider—and that’s great in a big GT touring car—but there’s more in the latest M6 than just its expanding dimensions.

In fact, the most important part of BMW's M6 got a little smaller for 2013. The daunting V10 it’s sported for years has been replaced by a twin-turbo V8—the same engine that caused so much controversy when it was introduced in the M5 as the first turbocharged M engine. But other than history, cylinders are all you’re sacrificing, as it’s more powerful and more efficient than the old 10-piston mill. With 500 lb-ft of torque showing up at just 1,500 rpm and sticking around until its 560 horses show up at 5,750, the M6 will produce peak power up to 200 rpm short of its 7,200-rpm redline. BMW is claiming a sprint to 60 in 4.2 seconds with the 7-speed dual-clutch automated manual, but its previous estimates have always been padded, so expect actual reviews to show better. As an example, the same engine in the M5 was estimated by BMW to hit 60 in 4.4 seconds, but several reviews clocked it at a substantially different 3.7. Get your stopwatches ready.

A quick once-over of the M6 shows that a lot of the offensive lumps and sheetmetal hernias of the last gen have been smoothed over, and the M6 sports a more aggressive and svelte look despite growing 3 inches in length and getting wider, too. Track is increased by 1.2 inches, and the front fenders bulge to accommodate. All this means more room inside, which is good news to those who might spend a few hours touring. Rear-seat passengers can rejoice with particular aplomb, and the trunk offers over 12 cubic feet of storage. You have to admit, it’s getting better.

But with all that extra room, BMW had to make sure it could bring this burly beast to a halt and quick. For the task, they employed massive 15.7-inch front and 15.6-inch rear rotors for the standard 19-inch wheels. If you jump up to the optional 20s, you can also check off the carbon ceramic units, which bump up front diameter to a pizza-sized 16.1 inches. Even better than bigger, they’re lighter, too, leaving 42.8 pounds of unsprung weight behind compared to cast-iron discs. And to make sure the car stays together during delivery of all this force, suspension mounts have been upgraded as well, and additional aluminum has been incorporated for more weight savings.

But that’s always been part of its modus operandi. Aluminum front fenders and doors and a carbon-fiber roof started this party, everything else just follows suit. And for your M dollar, following suit means goodies like the active M differential, Dynamic Damper Chassis Control and adjustable steering and throttle settings, all controlled by the M buttons. You choose how you want your M6 to behave—it’ll follow orders just fine.

And so continues the great BMW experiment into forced-induction M engines. You can’t complain about the numbers, so it’s going to have to be history standing alone in this fight. So far, there’s a lot stacked against it.

I Put In Specific Information About A Specific Car, Why Do I Get Ads For Ev...