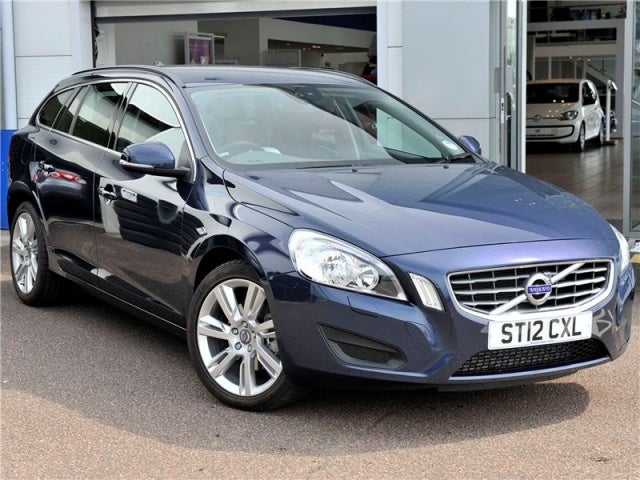 Restyled, repowered and reinserted into the Volvo lineup for the 2011 model year, the five-passenger Volvo S60 sedan personifies affordable luxury. For 2012, the S60 gains a new trim, the T5, to go with its popular T6. Equipped with a turbocharged inline 5-cylinder (I5) engine and available only in front-wheel drive (FWD), the new T5 is already becoming a hit with tire-kickers due to its lower base price for pretty near the same creature comforts as the all-wheel-drive-only (AWD) T6. In either case, Volvo’s latest incarnations of its family-oriented luxury sedans retain the comfy cabins and posh ride of their stablemates while maintaining Volvo’s traditional safety values. Alas, a somewhat tight rear seat and a trunk that’s a bit on the small side (12 cubic feet) might inhibit its worth on long vacation trips, while the T6’s turbocharged inline 6-cylinder (I6) powerplant leaves mileage suffering a bit. But these glitches are easily overlooked in the overall scheme of luxury, performance and value. Contenders in the upscale midsize sedan market, meanwhile, include Audi’s vaunted A4, as well as the Acura TL, Cadillac CTS and the Mercedes-Benz C300. All of these are good automobiles, no doubt, but few approach the bang-for-the-buck kick that the 2012 S60 offers.

In a further intimation of this notable value, both the 2012 S60 trims boast turbocharged power. The FWD T5 carries a turbocharged 2.5-liter I5 engine that couples with a 6-speed shiftable automatic transmission to put out 250 hp and 266 lb-ft of torque. Towing, though hard to picture from this high-end chariot, is maxed out at a respectable 3,307 pounds, while the EPA estimates this spiffy sedan will get a pretty fair 20 mpg city/30 highway. The top-shelf T6, meantime, gets a 3.0-liter turbocharged I6 powerplant that throws down 300 hp and 325 lb-ft of torque when mated with the standard 6-speed shiftable automatic. That towing capacity is curiously once more maxed out at 3,307 pounds, while mileage drops to 18/26. The T6’s AWD system, meanwhile, is governed by a mechanical center limited-slip differential.

In a luxury-oriented vehicle such as the 2012 S60, cabin features obviously have top billing, though 17-inch and 18-inch alloy wheels grace the exterior of the T5 and T6, respectively. Creature comforts in the base T5 include cloth upholstery, a power-adjustable driver’s seat and sport front seats with a fold-flat front passenger seat. These amenities are complemented by a leather and simulated alloy steering wheel, leather-trimmed shift knob, and leather and simulated alloy console, door and dash accents. Techno-gizmos include cruise control, remote power door locks, power windows, heated power mirrors, telescoping tilt-wheel steering, dual-zone climate control, and memory for three drivers' settings, including audio. Entertainment and other techno-goodies include a 160-watt stereo with an MP3-capable single-CD player, eight speakers, satellite radio, USB connection, phone pre-wiring and Bluetooth wireless communications technology. The T6, meantime, ups the ante a bit with standard leather upholstery and a universal remote garage door opener.

Options and available packages abound for both 2012 S60 trims. The base T5 is eligible for upgraded 18-inch wheels with a Dynamics Package that also includes driver-adjustable speed-sensitive power steering. Both trims can be delivered with the Multimedia Package, starring an Audyssy 650-watt audio system, 12 premium speakers, a rear-view camera and DVD navigation. The Climate Package, available to both trims, boasts heated front seats and an interior air quality system with active carbon filters, and the Premium Package offers a power sunroof, leather upholstery (in the T5) and a power-adjustable front passenger seat. The T6 additionally offers the available Touring Chassis for a smoother ride and the Four-C Active Chassis with a semi-active suspension that features three driver-selectable ride modes: Comfort, Sport and Advanced. Standalone options offered with both trims include, besides upgraded wheels and exterior accents, rear-seat DVD entertainment, an integrated hard-drive-based navigation system, wood interior cabin inlays and a personal car communications system allowing the driver remote operation of various accessories.

Owners of the 2011 and 2012 S60 trims mention some unnecessarily expensive and rigid options packages, as well as a somewhat cramped rear seat, as pet peeves. A noisy idle with the I5 engine also has a number of owners a bit miffed, while opinion on ride comfort seems evenly divided between those who favor handling over a posh drive, and vice versa. The AWD T6, it seems, is especially prone to negative comments regarding ride comfort. Notwithstanding a few minor faults, owners are liberal in their praise of the T5’s mileage and lower price, and they constantly laud both trims for their styling points, plethora of standard creature comforts, plush seating and wallet-friendly luxury.

patlil Have driven my volvo for one year, love the ride and the sharp styling. Gets better than expected highway miles. Trunk a little small but overall, excellent car.

My 2012 S60 is making a high pitched whining/whistling noise that seems to be coming from left side of the engine compartment. What could be wrong?

980 views with 5 answers (last answer about a year ago)

How Long For Ad To Show

How long for my ad to show? I still dont see it. Put it up about 30min ago.

I have a 2012 Volvo S60. The car has developed a leak where water settles on the floor mat below the drivers seat. It leaks only heavy rain and windy conditions. The car has been to the dealer 3 times...