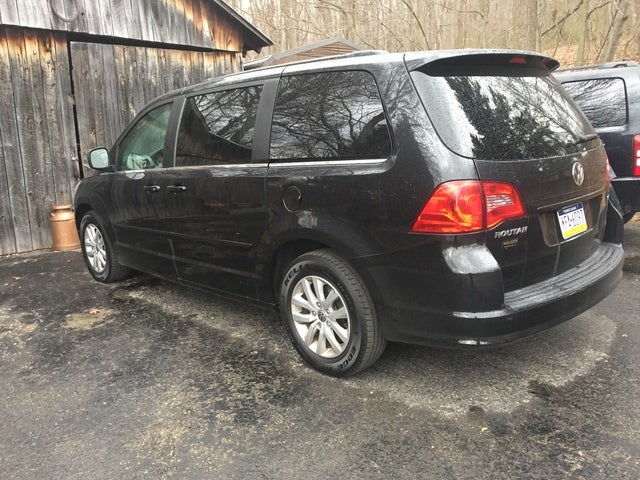 A few new standard inclusions join the features and options lists for the 2012 Volkswagen Routan, and much to the disappointment of many Volkswagen fans, the Routan is not even rumored for a refresh at any point in time. In its careful exclusion of the Routan from any press release on future models, VW has left many to question if it will even be around much longer, given lackluster sales and sizable fan backlash for Volkswagen's half-hatched mixed-breed Chrysler.

Since its 2009 debut up until a couple years ago, the Routan's upscale cabin was a welcome addition to the class, but since Chrysler's 2011 update of its Town & Country and Dodge Grand Caravan roots for the Routan, Volkswagen's half-breed has slowly slipped into the shadows of the pack with its higher price tag and questionable reputation. Drivers just aren't sure what to make of the Routan. Is it a Chrysler with a VW shell, or is it a Volkswagen with Chrysler mechanicals? For that matter, if something goes wrong, do you take it to the Chrysler mechanic or your VW dealer?

Although it benefits from a slightly stiffer suspension than its pure American counterparts to reduce body roll, the Routan is otherwise a Volkswagen-badged Chrysler without some of the handier features like Stow 'n Go second-row seats. Whether this means you'll get to avoid the electrical issues so typical of VW is uncertain, but some drivers report Chrysler's handiwork under the hood has left a bitter note on their purchase, with dangerous stalls that were not readily handled by Volkswagen.

Performance is otherwise merely average, with ride and handling rated level alongside the pack. The Routan is, however, described as markedly sportier than its American cousins in terms of cornering posture, and the cubbies that would otherwise get used for the seats make for some fantastic storage space. Cabin materials are the high point for the Routan—everything else, including its 17 mpg city/25 highway fuel economy, cramped driver legroom, 144 cubes of maximum cargo capacity, awkwardly tilted third row and frustratingly static second row, just doesn't come close to par with American driver expectations for a new minivan with such a steep tag.

In an attempt to stay competitive, VW added a new blind-spot warning system and Rear Cross-Path Detection system to the standard equipment list for the top-of-the-line SEL Premium. Adding the rear-seat DVD entertainment system to the second-in-command SEL also nets keyless entry/ignition and rain-sensing wipers, while the second-from-bottom SE would need to add the entertainment and Garmin navigation systems to fetch the same feature bonus. The base S carries over completely unchanged.

Offering 283 hp and 260 lb-ft of torque out of its Chrysler 3.6-liter V6, the front-wheel-drive Routan is not at all underpowered and arrives at 60 mph in just over 8 seconds. A 6-speed automatic transmission makes the engine into a smooth operator, while traction and stability control, antilock disc brakes, front side-impact airbags, driver-side knee airbag and full-length side curtain airbags ensure a safe trip in every Routan, which received the highest crash-test marks available. The SE and SEL have the option of a rear-view camera, and with the latest additions to the SEL Premium, at least the Routan isn't falling behind on technology.

What's your take on the 2012 Volkswagen Routan?

Have you driven a 2012 Volkswagen Routan?
Rank This Car

How Much To Repair Lifters On 2012 VW Routan?

Have a 2012 VW Routan (about 115K miles) with ticking engine noise. Mechanic diagnosed as noisy/damaged lifter. Quoted $1500-$2000 to replace all lifters; was told it was a good idea to replace al...

Does CarGurus Have A History Of Recent Ads

The dealer advertised our vehicle as a higher trim level than it really is. It was delivered today and is missing several features we expected. We wanted to get a screenshot of the original ad in c...

When I got out of my car a few minutes ago I noticed a loud noise coming from the rear driver side tire. Sounds like a hissing sound almost? Not like a belt or air leak or squeaky brakes. I just kind ...

How Do You Override The Lock Acctuator?

Hatch will not unlock

My Only Routan Remote Control Has Been Reset

Hello friends of the Routan! I am the proud owner of a VW Routans recently and am even if satisfied. But since yesterday the remote control not responding... The car goes on only through the emergenc...