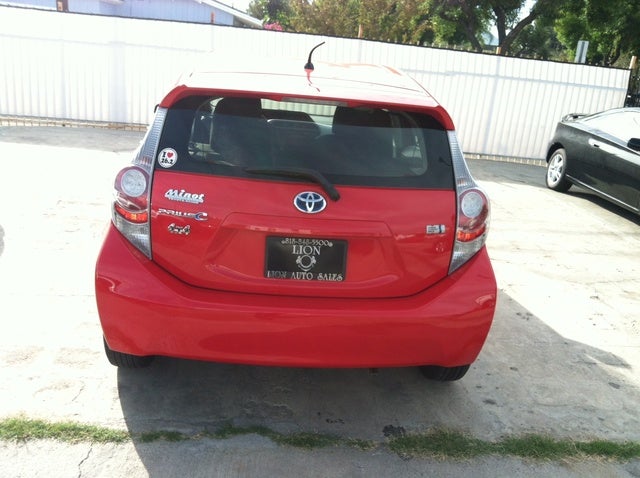 Best-in-class gas mileage, a low base price, some fairly sporty moves, a couple of unexpected standard extras and hatchback utility ought to put the debuting 2012 Toyota Prius C hybrid hatchback on the map.

An underpowered hybrid engine, an uncomfortable ride, low-rent cabin materials and a noisy interior all indicate that some tweaks are in order down the line for the Prius C.

For the eco-minded and the budget-minded, Toyota’s new 2012 Prius C hybrid offers an appealing combination of practical size, chart-topping gas mileage, high-end extra standard features and a low MSRP. Be advised, however, that this downsized Prius totes a pokey powerplant, and its low-rent interior won’t impress those looking for luxury. Keeping this little gas/electric hatchback to its intended purpose of running errands around town or commuting middling distances to work should, nevertheless, be enough to satisfy the frugal and green-leaning family.

The continuing evolution of Toyota’s ultra-popular Prius hybrid manifests itself in the brand spankin’ new 2012 Prius C. This 5-passenger hatchback wagon is downsized, down-powered and priced right. It’s also touted to get over 50 mpg. Not a bad deal for the middle-distance commuter, the harried soccer mom or the eco-minded, Sunday-driving little old lady.

Offered in four numerically ordered trims—the base Prius C One, the lower midlevel Two, the upper midlevel Three and the flagship Four—this little hatchback is nimble enough for twisty back roads, small enough to squeeze into jammed parking lots and powerful enough to… well, it beats bicycling. The damped-down hybrid powertrain is tweaked for improved fuel efficiency and weight distribution over its larger Prius kinfolk, but it sure could use a few extra ponies.

Further downsides to this latest Prius variant include tepid interior styling and materials, a noisy cabin, cramped rear seating and a less-than-plush ride. Cargo area is measured at 17.1 cubic feet to the upright rear seats, with the Prius C One offering a single fold-down rear seatback and all other trims sporting split-folding rear seats. Alas, the seats don’t fold quite flat and complicate loading by resting some 2 inches above the bottom of the rear hatch opening.

On the upside, though, an affordable MSRP, class-leading fuel efficiency, decent family-style practicality and a number of tasteful and quite unexpected standard amenities will allow even the most dedicated of automobile traditionalists to consider this little hybrid. Remember, the original Prius is legendary for bringing HEV (hybrid electric vehicle) technology to the masses.

Before committing to the new Prius C, however, check out Honda’s sporty CR-Z Hybrid or the marginally less-expensive Honda Insight Hybrid. The former is more of a kick to drive, but offers seating for only 2, while the latter isn’t quite as fuel efficient as Toyota’s wee little wagon but offers notably more refinement. 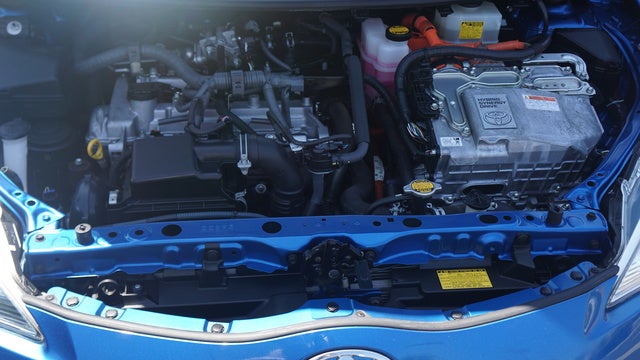 Though of similar design to that found in the standard-size Prius, the gas/electric drivetrain aboard the Prius C lineup is smaller in both dimensions and power. At the heart of this front-wheel-drive (FWD) subcompact’s hybrid system is a variable-valve-timed (VVT) 1.5-liter inline 4-cylinder (I4) gasoline engine and a 60-hp (0.9-kilowatt-hour) electric motor, both paired up with a continuously variable transmission (CVT). Altogether, using the combination of gas and electric power, Toyota’s downsized hatchback puts out 99 hp at 4,800 rpm and 82 lb-ft of torque at 4,000 rpm. Regenerative braking helps the four-banger keep a charge in the nickel-metal hydride battery, while auto engine stop/start technology helps maintain its best-in-class rating of 53 mpg city/46 highway.

Unfortunately, there’s the usual downside to this hefty gas mileage: While the Prius C gets decent performance around the neighborhood, it's not so decent on the highway. Tests of Toyota’s latest hybrid hatchback offering had it plod from 0-60 in 11.5 seconds, which won’t inspire a lot of confidence in highway merging and passing. A number of reviewers claim a reluctance on the part of the CVT to respond to pedal inputs at low and high speeds, though a few concede that middling-speed response more closely resembles what most of us expect in a street-legal automobile.

Virtually all reviews mention that the Prius C’s driver-selectable Eco mode allows a noticeable smoothing in throttle response for better fuel economy, but slows what’s already a less-than-perky powerplant even more, while selecting the EV button puts the Prius C into all-electric mode for, oh, maybe a block or two. On the plus side, most reviewers laud this downsized hatchback’s silky transition from gas to electric mode and back, while the CVT is praised for its near flawless performance.

A front independent suspension, bolstered by MacPherson front struts, a torsion beam rear end and stabilizer bars front and rear provide the platform for the 2012 Prius C lineup. The 15-inch wheels that come standard on all four editions are steel in the lower three trims, with the Prius C Four boasting 15-inch alloy wheels. All four trims ride on standard all-season tires, though the top-shelf C Four is available with 16-inch alloy wheels and low-rolling-resistance tires.

The standard wheels and tires do a pretty good job of absorbing small bumps and cracks, according to reviewers, but larger road imperfections are not handled nearly as well. Reviewers also claim that loading the Prius C Four with the sport-oriented quick-ratio steering and larger wheels degrades ride comfort even further.

Handling-wise, reviewers are of the opinion that this hybrid hatchback’s response to steering input is tepid, at best, with many feeling that this little hybrid wagon is agile but far from sporty. Most reviews note that the standard tires are too narrow to give much grip in corners, though all agree that the upgraded steering response and larger wheels available to the C Four will noticeably improve handling capabilities.

Finally, in testing the Prius C, at least one review found it coming to a stop from 60 mph in a very impressive 118 feet.

Keeping in mind that the 2012 Prius C is, above all, an economy-minded hybrid car, amenities ought not to be expected to compare with, say, a Lexus. The Prius C One, for instance, sports a rear spoiler, cloth upholstery, remote power door locks, power mirrors and power windows. A trip computer integrates a 3.5-inch hybrid performance display, while the simulated alloy telescoping and tilting steering wheel mounts redundant audio controls. Climate control and Bluetooth hands-free technology each come standard, as does a single-CD player with 4 speakers, auxiliary iPod integration and a USB port. The Prius C Two, meanwhile, adds a height-adjustable driver’s seat, split-folding (60/40) rear seatbacks, cruise control, cabin air filtration and a total of 6 speakers to the mix.

All Prius C trims can be delivered with available floor mats and cargo organizers, rear bumper protection and paint protection film, as well as Toyota’s VIP Plus remote security system. The Prius C Three, meantime, can be equipped with upgraded alloy 15-inch wheels and a power moonroof, while the Four is eligible for the optional Alloy Wheel Package that incorporates the moonroof, 16-inch wheels, a quicker steering ratio and low-rolling-resistance tires.

While virtually all reviewers lament the low-rent interior materials found in the budget-minded cabin, they concede that gauges and controls are legible, handy and simple to use. The navigation system in the Prius C Three and Four is noted to absorb most audio functions, but the steering-wheel-mounted audio controls alleviate many of the usual difficulties in using both systems at the same time.

The low-riding seats are a bit of a struggle to get in and out of, according to reviews, though doors are lauded as surprisingly accommodating. Road and wind noise are noted by most reviewers to be a bit of a distraction, while rear seating, as is normal in subcompacts, is comfortable only for 3 small children. Cabin storage is described in the majority of reviews as fair at best, while drivers will find some difficulty with side and rear visibility due to wide rear roof pillars and intrusive rear headrests.

The National Highway Traffic Safety Administration (NHTSA) gives the brand new Prius C a second-best 4 stars in overall protection, with front and side crash-worthiness and rollover tests each garnering those same 4 stars.

The Insurance Institute for Highway Safety (IIHS), meanwhile, gives this little hybrid hatchback a Top Safety Pick nod for 2012, with perfect scores of Good in all testing criteria, including front and side crash-worthiness, roof strength and seat and head restraint geometry.

There’s a bit of a quandary among owners of the 2012 Prius C regarding the trade-off between power and economy. Owners love the gas mileage they get from this hybrid micro-hatchback, but worry about its ability to keep up with today’s highway speeds. Additionally, the poor rearward visibility inherent in this low-riding wagon has a number of owners wondering why a rear-view camera isn’t among the equipment offerings, while the rough ride makes a few owners reluctant to carry a dozen eggs home without significant extra crate padding. Finally, significant road and wind noise at highway speeds (such as they are) is claimed by a number of owners to be a mild distraction.

On the positive side, owners find this mini-Prius to be welcoming inside, while its reasonable MSRP and hefty gas savings are given as the reason most purchased this hybrid-endowed hatchback in the first place. Owners also laud the Prius C’s logical control layout, its understandable hybrid performance readout and the fuel-miserly Eco setting. Finally, those owners who haunt the more crowded parking areas and traffic-choked avenues of the nation are effusive in their praise of this subcompact wagon’s small dimensions and tight turning radius.

Have you driven a 2012 Toyota Prius c?
Rank This Car

I Can't Find My Listed Car?

Something Wrong With My Ad.

Dear can you please be possible to check my ad? I try make a search and my ad doesnt appear. Please let me know it. Thank you.

What Is The Overall Rating On A 2011 Toyota Prius C

Why Do You Charge $29 For A Listing? I Thought The Listing Was Free.

How Do I Change My Speedometer From Kilometers Back To MPH?

accidentally changed from mpg to kil. Don't know how to get it switched back