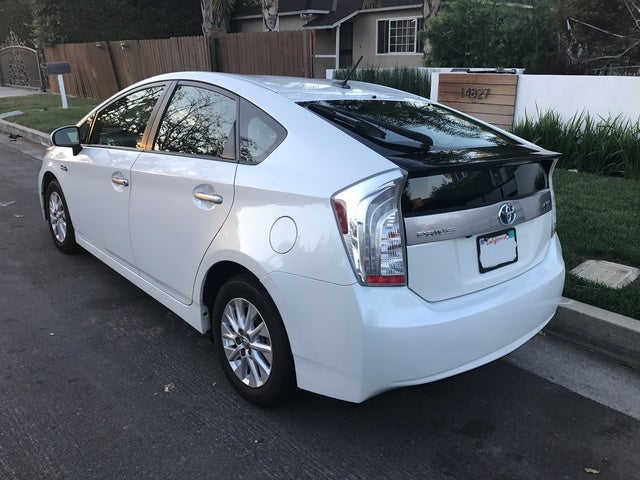 Tepid acceleration and a hefty MSRP, as well as an oddly located and over-endowed gauge and instrument cluster, shorter all-electric range than its closest rival and some distinctly underwhelming cabin materials may keep this primo plug-in hybrid from achieving true greatness.

In the automobile manufacturing world, it's a question of advance or die. Toyota's brand-new 2012 Prius Plug-In has all the tools to challenge Chevy's once-unique Volt for over-the-top efficiency and performance in the plug-in hybrid/electric automobile segment. When (not if) Toyota comes up with a way to lengthen this debuting hatchback's range, beef up acceleration just a tad and maybe lower its somewhat inflated MSRP, this gas-sipping Prius should quickly become the equal of its legendary forbears.

Toyota's venerable, indeed ground-breaking Prius is taken to the next level with the introduction of its brand-new, 5-passenger 2012 Prius Plug-In midsize hybrid hatchback. This new kid on the block offers traditional, ÃÂthough not always perfectly balanced, ÃÂgas/electric performance, along with a mileage-enhancing plug-in feature, which means, of course, even better fuel efficiency than the regular Prius, with longer and speedier trips on electric power alone. Then, too, a few extra bells and whistles for some added comfort and convenience won't hurt this debutant, either.

Available in 2 trims, Base and Advanced, this high-falutin' hatchback can, at least according to Toyota, journey up to 15 miles on electric power aloneâat up to 62 mph, no less. Alas, real-time figures are, according to a number of reviews, somewhat less impressive. What is certain, however, is the fact that this precocious Prius can be recharged in about 3 hours using an available 120-volt home charger unit, and if a heftier 240-volt charging system is used, the time, naturally enough, drops to about an hour and a half. Thus it's conceivable that a tank of gas will last about a month with short commutes and nearby shopping excursions.

Unfortunately, hybrids, especially of the Prius variety, are not going to burn up the track. Hybrid/electric technology still relies on ponderous battery packs that take up space and pile on vehicle weight. The Prius Plug-In packs a heavier and pricier, albeit more advanced, lithium-ion battery that feeds a pair of electric motors to take some of the load, Âand thereby some of the fuel gluttony, Âfrom the traditional inline 4-cylinder (I4) gasoline engine. However, acceleration still leaves much to be desired, as does agility.

In any case, those who want to buy American can check out Chevy's Volt, which goes further faster, at least for the moment, while others might want to take a look at the more traditional (and cheaper), if somewhat less fuel miserly Kia Optima Hybrid or Hyundai Sonata Hybrid. Though the technology still isn't perfect, rechargeable vehicles like the Prius Plug-In are decidedly the future, and this Japanese-made midsize 5-door can look forward to a bright one.

Flaunting the same gasoline-burning 1.8-liter I4 powerplant as its more traditional Prius sibling, the Prius Plug-In mates this variable-valve-timed (VVT) four-banger with a pair of 60kWh electric motors and the traditional continuously variable transmission (CVT) for a total of 134 hp at 5,200 rpm and a relatively paltry 105 lb-ft of torque at 4,000 rpm.

Mileage, meantime, is estimated at 51 mpg city/49 highway, which is about as good as it gets, while regenerative braking, along with plug-in recharging and, of course, the four-banger all contribute to battery recharging. Additionally, as with traditional hybrids, the Prius Plug-In boasts auto engine stop/start technology that also contributes to those impressive fuel-economy numbers.

Tests of the 2012 Prius Plug-In have it going from 0-60 mph in a plodding 10.1 seconds, about the same quasi-pickup as the next-gen Prius III. A distinct clamor from the I4 has a number of reviewers wincing when they step on the gas, but all-electric range and alacrity, not to mention those astounding efficiency numbers, keep reviewer complaints to a minimum.

Sprung like its more prosaic namesake, the 2012 Prius Plug-In flaunts a front independent suspension bolstered by MacPherson front struts, a torsion beam rear end and a stabilizer bar at both front and rear. Additionally, both the Base and Advanced versions of this midsize hybrid hatchback roll on 15-inch alloy wheels mounting low-rolling-resistance tires.

Reviewers are quick to note that the Prius line, in all its various versions, is a touring automobile, thus its ride is usually described as wallow-laden but relatively comfy over all but the roughest of roads.

As with its more traditional siblings, the Prius Plug-In suffers from over-boosted electric power steering that, according to most reviews, eases low-speed maneuvering but ultimately results in much body lean and noseplow in all but the most gentle of corners.

Reviewers also point out that the regenerative braking systems common to hybrid/plug-in technology will take a lot of getting used to, with the system aboard the Prius Plug-In especially bothersome. Tests did, however, find the Prius Plug-In stopping from 60 mph in a class-average 130 feet, some 12 feet less than its lighter-weight siblings, thus stopping power isn't an issue, but pedal feel might be.

Say what you want about hybrid vehicles, but the various makers of such creative conveyances do like to use these platforms as showcases for their more lavish amenities, and the 2012 Prius Plug-In is no exception. The Base trim, for instance, boasts a rear spoiler and heated power-adjustable outside mirrors on its familiar profile, with cloth upholstery, heated front seats, a height-adjustable driver's seat and a simulated alloy steering wheel mounting audio and cruise controls. Simulated alloy cabin trim provides a touch of class, while power windows and remote power door locks, a rear-view camera, a hybrid performance display and telescoping tilt-wheel steering ensure some added convenience. Climate control, of course, embraces all these baubles, while standard HDD navigation, Bluetooth technology and Toyota's touted Entune multimedia system includes such internet abilities as Bing, Pandora radio and iHeart radio, all via smartphone apps.

Options-wise, both trims are eligible for such available equipment as the Preferred Premium Accessory Package with carpeted floor mats, cargo mats and nets, and a first-aid kit. Standalone add-ons include all-weather floor mats, an emergency assistance kit and various exterior protection and exterior trim enhancements.

Reviewers find the accommodations aboard the Prius Plug-In to be roomy enough, with better-than-adequate small-item storage facilities. However, virtually all reviews complain that low-rent materials and overly plush seats detract from this hybrid hatchback's appeal, especially considering its price. Road and engine noise, too, can be distracting, according to many reviewers, while the unconventional dashboard cluster takes some getting used to and crams too many buttons, gauges and switches into an area that's just too compact for easy accessibility.

Finally, tall rear-seat headrests and a blatantly useless solid strip framing the rear window compromise visibility to the rear (though the standard rear-view camera helps immensely in this regard), and a few reviewers say that the Advanced trim's redundant head-up display ought to be standard on the Base trim also.

No testing results are available for the 2012 Prius Plug-In from either the National Highway Transportation Safety Administration (NHTSA) or from the Insurance Institute for Highway Safety (IIHS). The similarly equipped regular Prius, however, gets high marks in front and side impact testing, as well as roof strength tests from the latter, while the former gives it a top-notch 5 stars for overall safety and side-impact protection, with a second-best rating of 4 stars for front-impact and rollover protection.

Owner complaints regarding Toyota's introductory Prius Plug-In run the gamut from iffy cabin materials to a distinct lack of oomph from the hybrid powertrain. Some frustrating clunks and hesitation when the drivetrain shifts from gas to electric operation and back also disappoint a number of owners, while others are unsure what to make of the cluttered and distracting dashboard arrangement. Finally, the poor rearward visibility, though ameliorated somewhat by the standard rear-view camera, still bugs a number of owners.

On the Plus side, owners praise the gas mileage they get from this plug-in Prius, while the standard navigation system, quiet cruise, roomy cabin and the hefty all-electric range and speed also draw plenty of owner commendations. Ride comfort also draws its share of owner kudos, as does this brand-new plug-in's quiet cruise. It should be noted that much of this customer appreciation contradicts the majority of reviewer's opinions, thus those in the market for an eco-friendly and fuel-miserly hybrid might want to put the Prius Plug-In at the top of their tire-kicking list.

What's your take on the 2012 Toyota Prius Plug-In?

Users ranked 2012 Toyota Prius Plug-In against other cars which they drove/owned. Each ranking was based on 9 categories. Here is the summary of top rankings.

Have you driven a 2012 Toyota Prius Plug-In?
Rank This Car

How Could My Battery Capacity DOUBLE???

After my car went in for 2 weeks and over $9,000 in front end body work, mostly cosmetic and some frame straightening after I hit a piece of a truck's tire on the highway at 70 mph, my battery capac...

Not Plugging In For A Period Of Time-will This Damage The Batteries?

I will not be plugging in for around 6 months, will this cause any battery problems?