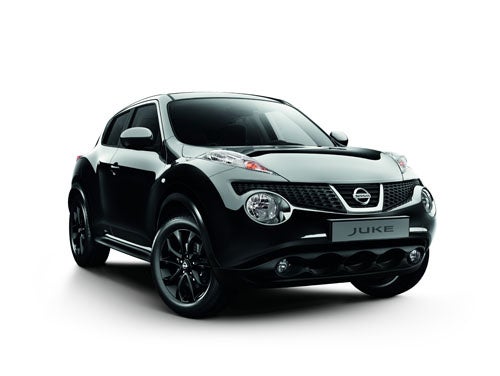 A quirky look and turbocharged power as well as some nifty moves and an affordable price should endear Nissan's pint-size 2012 Juke hatchback offering to the value-minded quasi-exhibitionist.

The 2012 Juke's quirky look and a dearth of cargo space compared with rivals, not to mention cramped rear quarters and a ride that’s far from posh, won’t sit well with those looking for purely practical touring.

Need a small, funky-looking hatchback that’s sort of potent, definitely personable and loaded with driving panache? That’s what Nissan's 2012 Juke hatchback is all about. Not as downright utilitarian as some, this pint-size people-hauler nevertheless fits the family budget, and it comes with enough bells and whistles to satisfy all but the most demanding mall-hopper.

For some turbocharged driving fun at a reasonable price, take a look at Nissan’s 2012 Juke subcompact hatchback. This 5-door, 5-passenger oddity sports turbocharged power and some nifty moves, with more than a few owners and reviewers claiming it to be one of the more entertaining subcompact commuter cars to drive.

Alas, this little people-hauler sports a unique look, sort of a cross between a Volkswagen Beetle and a Morris Mini. Therefore, as with all out-of-the-ordinary designs (Nissan Cube, Scion xB), this bite-size Nissan may take a little getting used to on the part of neighbors and friends. Maybe its nearly 36 cubic feet of cargo area (with the rear seats folded) will impress your golf partner, but only 10.5 cubic feet to the upright rear seatbacks won’t win points with the soccer team. Furthermore, the Juke, introduced just last year, offers no notable alterations for 2012.

In any case, this downsized 5-door comes in three trims, the base S, the midlevel SV and the flagship SL. All trims are available with front-wheel drive (FWD) or full-time all-wheel drive (AWD), and all sport the aforementioned turbocharged powerplant. Both SV and SL trims are delivered with Nissan’s touted Integrated Control (I-CON) system, which offers D-Mode driver-selectable settings that alter throttle response, transmission reactions and even climate control adjustment to suit your cruising mood.

Some words of caution here: A number of owners complain that Nissan has inflated the Juke’s mileage numbers and that real-world fuel economy isn’t even close to estimates, no matter how conservatively this little 5-door is driven. Furthermore, a few owners complain that Nissan is aware of the problem and, unlike the folks at Hyundai who dealt at least somewhat honorably with a similar situation, refuses to offer even an acknowledgement of the potential problem.

Be that as it may, this odd-looking little 5-door is making some serious inroads into the subcompact market. There are, however, some worthy rivals, including the equally funky-looking Scion xB and the more traditional Kia Soul and Mitsubishi Outback Sport. Each comes with a bit more practicality and cargo area, though none gives quite the driving kick. If, on the other hand, it’s agility you seek in a regular profile, take a look at Chevy’s economical Sonic or Ford’s well-wrought Fiesta. These latter gadabouts offer nearly the same moves, but neither has the Juke's alacrity off the line. Finally, the almost-as-odd-looking MINI Cooper Countryman offers a significant driving kick… as well as a significantly heftier price tag. 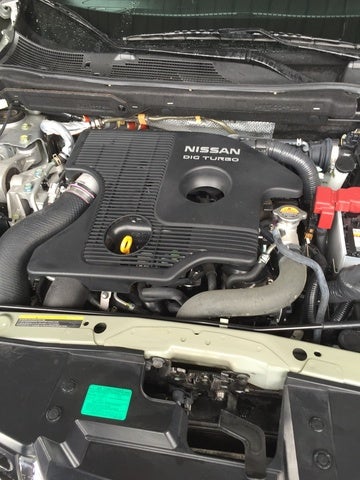 All 2012 Juke variations boast a turbocharged 1.6-liter inline 4-cylinder (I4) powerplant that’ll generate some 188 hp at 5,600 rpm. A continuously variable transmission (CVT) comes standard aboard all three trims and manages 177 lb-ft of torque at 2,000 rpm. The SV and SL, moreover, can be delivered with a 6-speed manual transmission for a sportier feel on the freeway, with performance numbers remaining the same. Variable valve timing (VVT), meantime, allows mileage figures to soar to 27 mpg city/32 highway in the standard front-wheel-drive (FWD) CVT-equipped trims, and 25/31 in FWD-toting stick-shift variants.

The available full-time AWD system with torque vectoring, meanwhile, allows a 50/50 split in torque to the front and rear axles in normal cruising, with added torque automatically diverted not only to either front or rear axle, but also from individual wheels that slip to those that grip. Be advised, though, that AWD traction is available only with the CVT and that mileage suffers a bit at 25/30.

Finally, CVT-equipped SV and SL trims tote the 3-setting D-Mode system that allows driver-selectable throttle and transmission response to fit a particular driving style. Adjustable to Normal, Sport and Eco modes, this system, under the I-CON banner, also allows climate control settings to be altered automatically for the most economical of cruise applications. Most reviewers find the Sport mode, which allows the CVT to become an auto-manual system, remains the most engaging drive setting.

A FWD Juke equipped with the CVT made a run from 0-60 in 7.3 seconds in testing, which reviewers find pretty quick for a subcompact 5-door. Reviews also note that the turbocharged four-banger won’t impress in the first few feet from a stop, but as the revs climb, the turbocharger makes its presence felt in dramatic fashion. The CVT, meanwhile, is described by most reviewers as smooth and alert and especially well-suited to the D-Mode driver-selectable system. Reviewers also praise the silky throw and agreeable clutch action that comes with the available 6-speed stick shift.

Unfortunately, a number of reviewers were a bit disappointed at the occasional hesitation of the available AWD system in transferring power to the rear wheels in slippery conditions, while virtually all remain unimpressed with the racket made by the four-banger on hard acceleration, nor are they particularly appreciative of the fact that this racket abates little at cruising speed.

All this is not to say that Nissan’s little 5-door is a burdensome beast on the typical road. Small bumps are handled with admirable aplomb, according to reviewers, but those larger potholes and misaligned highway expansion joints will evoke a distinct pounding.

Get this half-size hatchback on twisty back roads, however, and reviewers suddenly throw terms like “excitement” and “fun” around quite liberally. Steering is well-weighted and responsive, according to virtually all reviews, and those inordinately wide tires (for the class) and a wider than usual stance offer a nimbleness that reviewers claim makes any perceived stiffness in the ride seem an inconsequential speck in the overall driving experience. Most reviewers further claim the D-Mode’s Sport setting will get the most out of an already heady handling extravaganza.

Brakes in this down-sized hatchback, meantime, are acceptable, if not exceptional, with tests showing the Juke coming to a stop from 60 mph in a class-average 123 feet.

Though it’s far from a luxury liner, the 2012 Juke lineup sports at least an adequate level of standard appearance, convenience and comfort amenities. The base S, for example, comes delivered with such staples as cloth upholstery, a height-adjustable driver’s seat, remote power door locks, power-adjustable outside mirrors and power windows. Standard cruise control, a trip computer and tilt-wheel steering also grace this entry-level trim, as does air conditioning, Bluetooth hands-free calling, and an MP3-capable single-CD player with 6 speakers and auxiliary iPod integration.

At the top of the Juke lineup, the SL trim throws such standard goodies as heated front seats, leather upholstery, a rear-view camera, 7 Rockford Fosgate premium speakers, a USB port and a memory-card-based navigation suite on top of those features found in its lesser siblings. The navigation suite and the premium audio, meanwhile, can be added to the midlevel SV as optional equipment.

Most reviewers claim that, for better or worse, the 2012 Juke’s cabin reflects its rather outlandish profile. Nearly all reviewers also note that too many low-rent hard plastic accent pieces, an armrest-depleted front seating area and some less-than-capacious rear-seat accommodations detract noticeably from this otherwise reasonably attractive and comfortable interior.

On the positive side, front seats are described in most reviews as comfy and supportive, with the standard leather upholstery in the SL trim evoking a notion of plush. Gauges are noted to be large and easily readable in all light conditions, with audio and climate controls eminently reachable even for average-size folks, and other controls and buttons are well-marked and simple to operate.

The Insurance Institute for Highway Safety, furthermore, awards Nissan’s little 5-door its Top Safety Pick status for 2012, with top scores of Good in all testing criteria.

Although most 2012 Juke owners are pretty pleased with their funky little family hatchback, a number of issues have raised their ugly heads. Many owners complain that gas mileage is not as advertized by either Nissan or the EPA, despite avowals of ultra-conservative driving habits (liberal use of the Eco mode and cruise control). Furthermore, a number of these complainers feel Nissan knows of the problem but refuses to offer either corrections or compensation.

Other glitches noticed by owners include the cramped rear seating, the plethora of low-rent cabin plastics, the lack of power-adjustable front seats, and a curious dearth of proper cabin illumination. Finally, a number of owners question the placement of the owner’s manual holder on the rear seatback, where it must be removed to expedite efficient cargo loading.

On the plus side, owners are pleased with the agility shown by this pint-size 5-door, as well as with its standard turbocharged power. That unique Juke look is a decided deal-maker for those who want to stand out in the crowd, and the nifty 3-mode I-CON/D-mode dial-in throttle, transmission and climate-control settings also remain a hit with those who want to tailor the ride to their fancy. Finally, a number of owners praise this downsized hatchback’s maneuverability in tight spaces, while the available AWD has those denizens of snow-deluged driveways all but delirious with delight.

Users ranked 2012 Nissan Juke against other cars which they drove/owned. Each ranking was based on 9 categories. Here is the summary of top rankings.

Have you driven a 2012 Nissan Juke?
Rank This Car

How Do I Get My Title For Car Purchased Thru Car Gurus?

what do I have to do to get my title from car gurus that I bought on Feb 17,2020, paid in full, got a bill of sale, and received the car but still have not received the title which car gurus was han...

or its much more better to be 190 hp otherwise with 117 hp it feels the car does not go as fast as u expect ? or in the other word the car is too heavy for 110 hp engine ! im not talking about raci...