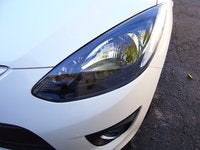 It’s light, it’s little, and it’s cute as a button, but don’t be fooled by the 2012 MAZDA2’s elfin looks. The MAZDA2 offers a big driving experience along with some impressive fuel mileage. No, it doesn’t have a sumptuous interior, or high-tech gadgets, but you can buy all those for your apartment with all the money you’re going to save on gas and car payments. This is only the second year for the MAZDA2 in the U.S., but it has had several very successful incarnations in Europe since 2007. Famous for its happy-face grille and sweeping lines, the MAZDA2 comes with 4 doors, which most of its competition does not.

For 2012, the MAZDA2 comes in two trims, the Sport and upscale Touring. Both come with a 100-hp 1.5 liter 4-cylinder engine and a 5-speed manual transmission or an optional 4-speed automatic. Mileage is rated at a penny-pinching 29 mpg city/34 mpg highway, and it takes regular unleaded fuel. The MAZDA2 returns with many of the standard features from years past, like air conditioning, power windows and remote keyless entry, locks and mirror. The 2012 MAZDA2 Touring trim should retain some of the nice touches it has, such as alloy wheels in place of wheel covers and a rear roof spoiler. Not to be forgotten are fog lamps and a chromed exhaust tip. Standard for both trims are front-wheel drive, a torsion beam rear suspension and rear drum brakes on its 15-inch wheels.

At a modest 2,300 pounds and with a low center of gravity, the MAZDA2 offers some of the best handling within its small class. Electric power-assisted steering was added to help gas consumption and in turn, adds to its truer road feel. The MAZDA2 has enough power to move that 2,300 pounds with some real conviction, and acceleration is as responsive with the automatic as it is with the manual transmission. The ride is as you would expect in a small car, but it handles bumps well and cruises on the highway with the best of them. The instrument panel is clear and easy to read, though the climate controls have rotary controls with slightly small markings. It comes with fairly standard audio controls, but it is quizzical why Mazda didn’t include an iPod/USB port as a standard feature, if for no other reason than to add to the cute factor.

There are no surprises in the interior surfaces - many are plastic, albeit nice-looking plastic. The Touring trim offers a leather-trimmed steering wheel, which is a nice touch. The cloth upholstered seats have large side bolsters to hug you in all the right places and are surprisingly comfortable. But don’t expect to be hauling construction equipment, as the MAZDA2 offers very little cargo room. It has split-folding rear seats, but no pass-through to the trunk for larger items. There is sufficient legroom for modestly sized adults in the back seat, so you might want to trade in all of your really big friends. Cabin storage is minimal, with some door pocket storage and a rather undersized glovebox. A factory-installed armrest with storage is available in the Touring trim.

The MAZDA2 continues to be loaded with standard safety features, including side airbags, side air curtains, ABS and Dynamic Stability Control with traction control. Front passenger airbags and curtain side airbags for all passenger seats are also included in the base price. The 2012 MAZDA2 is expected to achieve IIHS safety ratings of Acceptable to Good, as in previous models. This is not on par with other models in Mazda’s lineup, but certainly comparable to if not better than a lot of its class.

If you've been looking at the Ford Fiesta, the 2012 MAZDA2 is priced lower with no loss in features or size. It is way more fun to drive and offers no less space than its higher-priced competition. The 2012 MAZDA2 is expected to retain much of its resale value, unlike similar cars in its class, like the Honda Fit and Ford Fiesta. How often do you actually get to pay less for more?

Have you driven a 2012 Mazda MAZDA2?
Rank This Car

ABS Kicks In At Low Speed?

I have lost my car keys and my Mazda 2 has to be loaded and taken to a dealership for new keys to be made. I have an automatic transmission. How do I get my car into neutral with no key?

Slight squeak/chirp starting while idling. I assume it's one of the belts...? Could it just be pulley tension? Also, I appreciate everyone's help on here. I have been having trouble responding to...

Car body and steering wheel begins to shake during braking. Stops like it has oval wheels in a sense. Recently replaced front brakes

Leak in right front strut. 2012 Mazda 2. Front wheel drive. Any way to fix the leak before it becomes more of an issue???