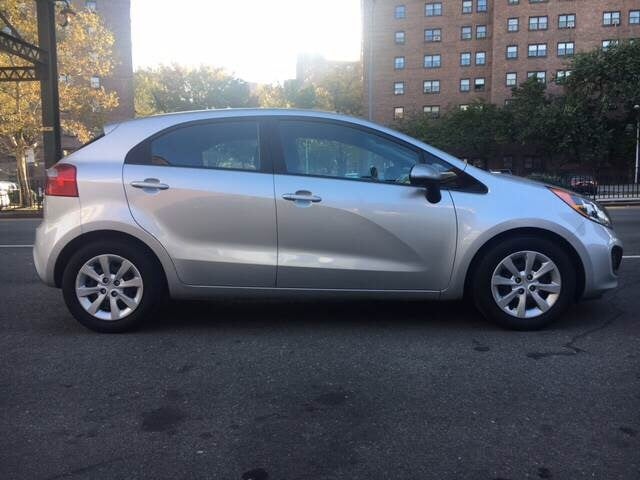 A stylish new look, direct-injected power, loads of standard and optional goodies, a spacious feel and an award-winning warranty all put a shine to Kia's little 2012 Rio5 hatchback.

Some unseemly engine racket, a cramped rear seat, and frustratingly inept folding rear seatbacks are among the issues Kia will need to address in its 2012 Rio5 offering.

With a whole new look and feel for 2012, Kia has come up with a gem of a subcompact hatchback with its Rio5 re-do. Those start-up families in need of a practical, economical and good-looking ride could do a lot worse than this heady little hatchback. But check out the competition before you buy.

Kia has reworked its value-laden but not-quite-ready-for-prime-time Rio5 subcompact hatchback into one of the better choices in the segment for 2012. A spiffy new look, a peppier 4-cylinder powerplant, and some added elbow room inside all add up to a winner in this 5-seater. Granted, this is not a car for the large family, but as a maneuverable little mall-hopper or an economical commuter crawler, the latest edition of this value-toting 5-door (hence the “5” in its moniker) is admirably adept. Cargo area, meanwhile, gets upsized to 49.8 cubic feet with the rear seats folded, with some 15 cubic feet available to the upright rear seatbacks.

Now available in three trims, the base LX, the new-for-2012 midlevel EX, and the sport-oriented, top-shelf SX, the Rio5 suddenly offers a wealth of graduated standard features and useful options, as well as the best warranty coverage in the business. Of course, the redesigned exterior has its supporters and, well, those not so supportive, but it does evoke at least a nod to modern-day sensibility, with the occasional review even offering the word “bold.”

Although Kia has gone through the identical difficulties with over-exuberant mileage claims as its parent company, Hyundai, after some backing and filling, the Korean automaker now offers allegedly more accurate fuel-economy numbers, but there’s no doubt that both Kia and Hyundai suffered a bit in the media for their ill-advised mileage antics. Nevertheless, the reworked Rio5’s new engine, with direct injection adding a bit more power and variable valve timing keeping fuel consumption minimized, ought to come close to 40 mpg with judicious use of the gas pedal.

Hyundai’s Accent, meanwhile, is probably closest to the Rio5 in price, features and performance, while Ford’s nifty Fiesta, Honda’s excellent Fit and Chevy’s spiffy Sonic all remain to challenge Kia for supremacy in the subcompact market, and all are worth a tire kick or two. But the new-look Rio5 hatchback, with all that it has going for it, looks like it’s here to stay. 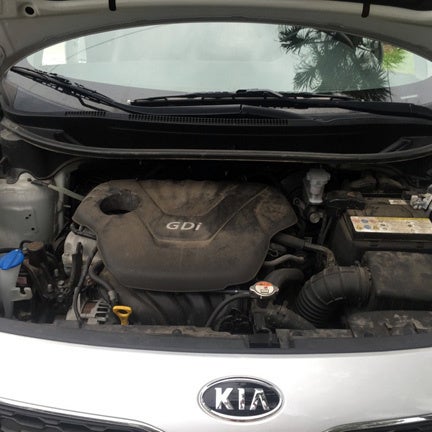 Mileage figures, meantime, run 29 mpg city/37 highway in the stick-shift-equipped LX trim and 28/36 in those editions carrying the shiftable automatic, and once again, this little hatchback is offered only in a front-wheel-drive (FWD) configuration.

Reviewers note that the brand-new I4 may seem small, but the newly installed direct fuel injection (DI) technology allows it to boast a bit more oopph than those four-bangers found in many rivals. Both transmissions provide seamless shifting, according to reviewers, with the automatic providing adept downshifts that make the most of the available ponies. One thing that virtually all reviewers mention, however, is the noise factor out of this pint-size powerplant from even moderate acceleration, though most concede that it settles down pretty well at highway speeds.

The re-worked 2012 version of the Rio5 does stick with a front independent suspension complemented by MacPherson front struts, a torsion bar rear end and stabilizer bars fore and aft. Both the LX and EX trims, meanwhile, mount 15-inch steel wheels, while the sportier SX boasts 17-inch alloy wheels, and all trims roll on all-season tires.

Responsive, well-weighted steering gives drivers a feeling of confidence even on twisty back roads, according to most reviews, with body lean in corners well-damped and lane-keeping abilities smartly demonstrated on the highway. The SX version, with its sport-tuned suspension, obviously adds that much more to the agility factor, with many reviewers actually finding a significant fun factor.

Most reviewers, meantime, describe ride comfort in this pared-down hatchback as competent enough for its size, with smaller bumps dealt with handily and larger road imperfections felt, but not to a particularly bothersome degree. Be advised, however, that the sport-oriented SX will offer a ride that may be a bit too solid for some tastes.

Brakes, finally, are noted by reviewers to be strong, easily modulated, and glitch-free. Testing showed the Rio5 coming to a stop from 60 mph in 119 feet, which reviewers feel is admirably abrupt for the subcompact class.

One of the things that has impressed reviewers about the 2012 incarnation of the Rio5 is the surprising number of standard features and optional equipment included for a family-targeted price.

The base LX, for instance, sports a standard rear spoiler and heated power-adjustable mirrors outside, with cloth upholstery, a height-adjustable driver’s seat and split-folding rear seatbacks adorning the inside. A trip computer is standard, as well, as is the tilt-adjustable steering wheel that mounts redundant audio controls. Air conditioning is, of course, delivered in this entry-level trim, while entertainment is offered via an MP3-capable single-CD player with 4 speakers, satellite radio, auxiliary iPod integration and a USB port.

At the pinnacle of the Rio5 lineup, the sporty SX flaunts such additional standard goodies as a rear-view camera, leather and simulated alloy steering wheel, a leather-wrapped shift knob and UVO infotainment interface.

The EX, meanwhile can be delivered with the available Convenience Package that includes 15-inch alloy wheels, UVO infotainment interface and an in-dash hard-drive system that incorporates Bluetooth music streaming. The midlevel EX also becomes eligible for the optional Eco Package with idle stop/go (ISG) technology that translates into some extra fuel savings.

In keeping with its lofty status, the flagship Rio5 SX can be delivered with an available Premium Package boasting hard-drive-based navigation with SiriusXM traffic, as well as a power sunroof, leather-trimmed upholstery, SmartKey with remote entry and push-button start, and heated front seats.

Virtually all reviewers find the interior appointments in Kia’s pint-size 5-door a cut above what’s expected from the class. Cabin room is admirable in front, according to most reviews, though the rear seats will be pretty cramped for all but small children. Reviews consistently describe interior appointments as tasteful and welcoming, with the SX trim’s optional leather upholstery an especially classy touch. Finally, clear and easy-to-read gauges, simple and straightforward controls, and a svelte dashboard presentation all gain praise from even the most discerning reviewers.

Although it offers a new look and upgraded performance perks, the 2012 edition of the Rio5 hatchback of course retains its plethora of standard safety features. Four-wheel antilock brakes (ABS) with electronic brakeforce distribution and emergency braking assist endow each trim, as do traction and stability control, and hill-start assist. Dual front side-mounted airbags and front and rear head airbags also remain standard throughout the lineup. The flagship SX trim, meanwhile, sports standard daytime running lights and dusk-sensing headlights, as well as front-fog/driving lights and turn-signal-integrated mirrors. The EX offers the latter two safety items as optional equipment when the available Convenience Package is selected.

The Insurance Institute for Highway Safety (IIHS), meantime, has tested the Rio5 only in front impact protection, for which it awarded its top score of Good.

As a reflection of Kia’s (and its corporate overseer Hyundai’s) recent fuel-economy faux pas, the majority of owner complaints regarding the 2012 Rio5 encompass mileage numbers that don’t jibe with advertised figures. Some build quality issues, furthermore, as well as some minor dissatisfaction with rearward visibility, poor standard tires and what one owner calls spongy throttle response, all rear their ugly heads in various consumer reviews.

On the positive side, the surprising surfeit of standard features, a pleasantly pampering cabin ambiance, some amped-up power and performance numbers and, of course, one of the most comprehensive and long-lasting warranties in the business add up to a lot of smiles on the faces of those who drive away in this Kia keeper.

Users ranked 2012 Kia Rio5 against other cars which they drove/owned. Each ranking was based on 9 categories. Here is the summary of top rankings.

How Do I Advertise

How do I advertise my car for sale on Cargurus.

Heres The Short And Skinny On My Situation. Recently Had My Oil Changed An...

I also had the mechanics pull it through their car wash which is mostly done by hand as it was free with an oil change and they always do a nice job cleaning my car. My brother said to start with...

I have a 2006 kia rio5 sx,when the motor is running I hear air bubbles coming from the fuel tank.When I put gas in the car it is hard to start.A trouble code showed a vacuum leak.

I accidentally put $5.85 worth of diesel in my Kia Rio 5 can I mix gasoline in it and let it run out

60 views with 7 answers (last answer about a year ago)