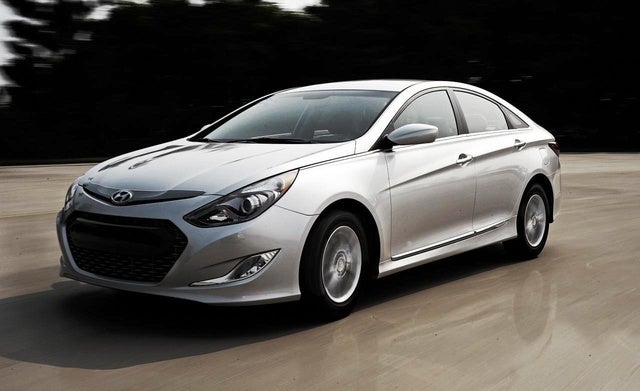 Some differences between advertised and real-world mileage figures, a funky eco-performance display, an unrefined hybrid powertrain, iffy regenerative brakes and a dearth of rear-seat headroom keep the 2012 Sonata Hybrid, a newcomer to the hybrid wars, from true greatness.

Yes, Hyundai has some things to iron out in its newfangled hybrid powerplant, and yes, the regenerative braking system needs work, but there’s also a lot to like about the 2012 Sonata Hybrid. Tolerable ride comfort is complemented by competent handling, while impressive gas mileage, a well-wrought cabin, a slick profile and one of the most comprehensive and lengthy warranties in the business combine to give this fine 4-door some hefty appeal. Rivals, however, show a lot to admire as well, so do your homework before signing on the dotted line.

It’s not the most refined hybrid vehicle out there, but the attractively styled 2012 Hyundai Sonata Hybrid represents the second year of the Korean automaker’s dabbling in gas/electric technology. Several firsts come with this recent plunge into the hybrid electric vehicle (HEV) pool, including a lighter and marginally smaller lithium-polymer battery replacing the more common nickel-metal hydride battery found in most rivals. Further, the electric motor is located between the 4-cylinder gasoline engine and the transmission for a slightly more efficient output. Altogether, this hybrid system is touted to put out better horsepower and torque, as well as retaining an electric charge longer than most of its competition. Finally, the standard 6-speed automatic transmission lets drivers ease into the hybrid experience a little quicker than do the continuously variable transmissions (CVT) that come standard with most in the class.

Alas, though they try, the folks at Hyundai still have a ways to go in perfecting their hybrid offering. The transition from gas to electric power and back is often less than smooth, according to a number of professional and consumer reviews, while real-time gas mileage, not to mention all-electric acceleration numbers, seldom measure up to advertised figures. Meantime, the regenerative braking system is thought by many to be disconcertingly difficult to get used to. All in all, it appears that the Korean automaker has its work cut out for it, hybrid-wise.

In any case, the Sonata Hybrid is offered in one trim, euphemistically labeled the Base. Available only with front-wheel drive, this midsize sedan retains Hyundai’s “Fluid Sculpture” design scheme, which results in a handsome profile that sets the car apart from virtually all its competitors, indeed, even from its non-hybrid siblings. It also remains a well-equipped family automobile, though trunk space, due to the still-sizeable battery pack, is only 10.7 cubic feet, and the split-folding rear seatbacks, common to the gas-powered Sonata lineup, are deleted in the Hybrid edition. Noteworthy additions to the 2012 trim, meanwhile, include Hyundai’s Blue Link infotainment, directions and safety alert technology becoming standard equipment, as well as a new lifetime warranty on all hybrid powertrain components and the addition of an optional Leather Package.

Notable rivals to the sophomore-year Sonata Hybrid include the redesigned and more comfortable Toyota Camry Hybrid and Ford’s legendary Fusion Hybrid, with its nifty handling and state-of-the-art tech features. It might be worth a few added tire kicks to check out these worthy competitors before deciding on the Sonata Hybrid. 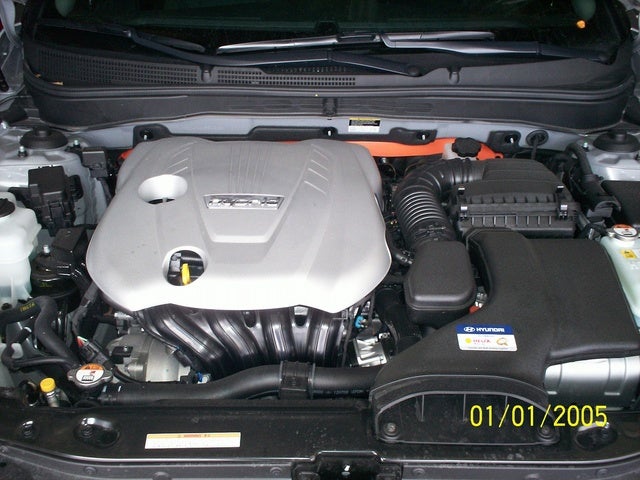 The unusually configured gas/electric powerplant gracing Hyundai’s 2012 Sonata Hybrid is built around a 166-hp (at 6,000 rpm), variable-valve-timed (VVT) 2.4-liter inline 4-cylinder (I4) gasoline engine that mates with a 40-hp electric motor and 6-speed shiftable automatic transmission for a total of 206 hp and 193 lb-ft of torque. With the traditional engine's auto start/stop capability, class-leading estimated mileage numbers are pegged at 34 mpg city/39 highway, but a number of reviewers—and owners—dispute these figures, finding them a bit inflated. Also somewhat fantastic is Hyundai’s claim that the Sonata will accelerate up to 62 mph on electric power alone. Tests by various reviewers showed this claim to be highly suspect.

Be that as it may, a few acceleration tests of the Sonata Hybrid found it scooting from 0-60 in somewhere between 8.7 and 9.0 seconds on combined engine and electric power, which isn’t bad, comparatively speaking. The lighter-weight lithium-polymer battery is thought by many reviewers to contribute to this far-from-pokey acceleration.

Some reviewers, however, note that the standard 6-speed automatic transmission, when in full automatic mode, has a tendency to get lazy on downshifts and often becomes easily confused in stop and go traffic. In other reviews, the problem is described as a less-than-seamless transition from gas to electric power and back. Finally, a persistent whir and whine also pervades the Sonata Hybrid’s drivetrain performance, according to several reviewers, though most concede that it’s not especially bothersome.

Hyundai’s 2012 Sonata Hybrid rides on a 4-wheel independent suspension that sports MacPherson front struts, a multi-link rear end and a stabilizer bar in front and rear. What most reviewers describe as a decently compliant ride is due, in their considered opinion, to the standard 16-inch alloy wheels and all-season tires with which this snappy hybrid is endowed. However, more than a few reviews note a plethora of discomforting rocking and rolling over larger bumps and dips, though they concede that the Hybrid’s ride-worthiness is far more forgiving than the sport-tuned suspension that graces the regularly powered Sonata SE.

Further disagreement is found among reviewers when this hybrid 4-door’s handling capabilities are discussed. Most consider the Sonata Hybrid to more than hold its own through the lazy curves and normal gyrations of the typical commute or errand, while others claim that a distracting numbness in the steering wheel means less road feedback and little driving élan. All reviews, however, note that this 4-door’s unobtrusive profile lends itself well to maneuvering in tight spaces.

Lastly, nearly all reviewers claim a steep—some say impossible—learning curve is necessary to overcome a disturbing shudder and shake when bringing the Sonata Hybrid to a stop. According to these reviews, the regenerative braking system, which assists the I4 in recharging the battery, is quirky even in ordinary stopping duties. Pedal feel is alleged to be occasionally spotty, while vibration and some slight pull are among the more common symptoms of this less-than-confidence-inspiring braking system. It must be noted, however, that tests of this hybrid’s braking prowess found it coming to a stop in an average of 126 feet from 60 mph, which is pretty much average for the class.

Hyundai has made a name for itself by equipping its vehicles with a veritable cornucopia of standard amenities at a competitive price. Though the 2012 Sonata Hybrid demands a notably higher MSRP than its gas-powered brethren, it nonetheless offers comparatively numerous standard appearance, comfort and convenience features.

Reviewers, by and large, note the Sonata Hybrid’s cabin to be spacious, comfortable and inviting, with adequately padded interior surfaces and mostly pleasant textures. Controls are simple to operate and logically placed, and the cabin remains reasonably unencumbered by road and wind noise.

The hybrid performance display, however, is unimpressive by competitor’s standards in the opinion of most reviewers, and the simulated alloy accents aim for but miss the upscale ambiance they attempt to portray. Rear-seat room is debated by reviewers, with some according the nether regions at least tolerable roominess and others claiming little headroom for average-size adults.

The Insurance Institute for Highway Safety (IIHS), meanwhile, has this fancy 4-door tabbed as a Top Safety Pick for 2012, despite its second-worst rating of Marginal in small-overlap front impact tests. All other tests in the IIHS itinerary, of course, resulted in its highest score of Good.

Among the more grating downsides that owners of Hyundai’s 2012 Sonata Hybrid note is a perceived gap between estimated fuel savings and what they actually achieve. Virtually all owners who are frustrated by this discrepancy are quick to point out that frugal driving habits seem not to improve things, though a few admit that perhaps the gas/electric system just needs some getting used to. A number of owners also complain of much shuddering and jerking when transitioning from gas to electric power and back. Opinion is divided, however, on whether this frustrating glitch is due to the transition process itself or to malfunctions in the 6-speed automatic transmission. Finally, several owners complain about the less-than-refined look and feel of the dashboard-mounted hybrid performance display.

On the positive side, more than a couple of Sonata Hybrid owners are happy with their real-world mileage results, citing these fuel savings as adding to this snappy sedan’s overall value. Additionally, this Hyundai’s sleek and up-to-date styling draws kudos from virtually all owners, as do cabin room and comfort. Decent ride comfort and some surprising nimbleness also come in for a fair share of owner praise, with the unusually generous warranty coverage of all hybrid components a much-appreciated bonus.

What's your take on the 2012 Hyundai Sonata Hybrid?

RHPATTERSON I have had my 2012 Hyundai Sonata Hybrid for one month, and I have not experienced any of the jerkiness that I have read in other reviews. I am 6'3" and rode comfortably in the back seat as we traveled for Thanksgiving. Regarding MPG and cost savings, I formerly had a Lincoln Town Car. On our Thanksgiving trip, I saved $106.59 in gas over what I would have paid in the Lincoln, and acheived 42.7 MPG on the highway. For the month, I have saved $259.89 in gas between the two vehicles. I am THRILLED with my Sonata!! I am three time Lincoln owner, but I think I have found a car that will make me forget about Lincoln!! Thank you Hyundai for an incredible car, ride, saving and comforts!!!

Gesiggie It took a year for the 'jerkiness' and shuddering to present itself. I loved my 2012 Hyundai Sonata Hybrid until about a month ago. After a software update that was supposed to fix the problem, I've been told by the service centre there's nothing they can do. I brace myself every time I stop. I hope you don't have the same experience in a few months...

Tifferp A lot of problems with the 2.4L engine and the hybrid system. The electrical system requires all sorts of specialty diagnostic tools - and very few dealers can afford them. So they are using basic shade tree procedures to troubleshoot and attempt to repair very complicated electrical/software problems. Unfortunately, unplug and reboot sometimes solves the problem - just like a poorly designed PC.

Users ranked 2012 Hyundai Sonata Hybrid against other cars which they drove/owned. Each ranking was based on 9 categories. Here is the summary of top rankings.

Have you driven a 2012 Hyundai Sonata Hybrid?
Rank This Car

What is the problem

Hi, I have a 2012 hyundai sonata hybrid oil light is on with the check engine light.. I took the car to do the oil change but they didn't reset the light does anyone knows hiw to reset the light.....

Which Car Is Better?

21 views with 7 answers (last answer about a year ago)

Why Won’t My Sonata Hybrid Start When I Use The Smart Key Holder?

Key not detected warning came on when I pushed start. Used the smart key holder, pushed start, pressed break, and all the warning lights on the dash flashed intermittently along its som type of alar...

312 views with 6 answers (last answer about a year ago)

Smoking Car Sold To Me