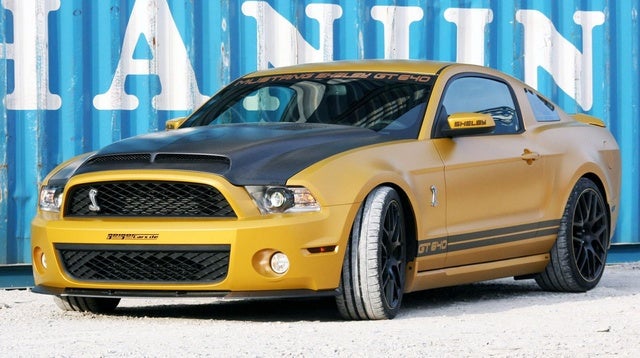 Ford's Mustang lineup gets a new addition for 2012, in the form of the performance-oriented Boss 302, which delivers an impressive 444 hp while still managing decent fuel-economy numbers.

The 2012 Mustang's rear seat remains tight, and some interior materials in lower-end trims have an inexpensive, plasticky look and feel. 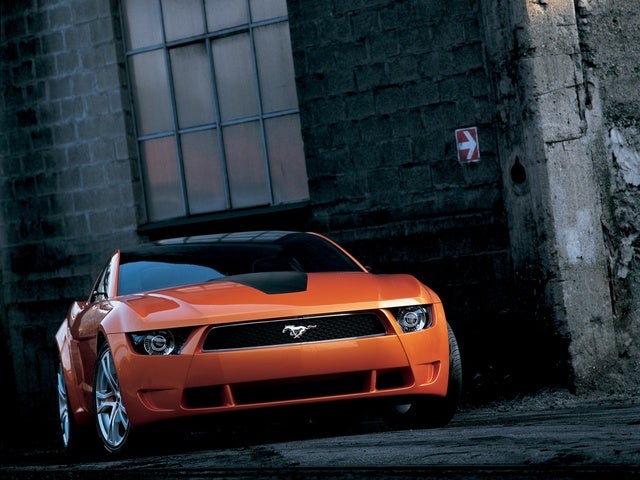 By most reports, the 2012 Ford Mustang delivers as promised when it comes to performance and handling and pleasantly surprises on fuel economy as well. The addition of the Boss 302 high-performance 'Stang expands the upper end of the lineup, but most reviewers find the entry-level V6 powerplant an ideal balance of power and
efficiency, and it comes highly recommended. Entry-level V6 and V8-powered GT trims skimp on interior refinements, however, so buyers seeking a certain level of creature comforts will want to look at the Premium trims or consider an interior upgrade package.

The Ford Mustang lineup receives a major addition for 2012, in the form of the venerable Boss 302 trim. Available in a limited production run, the Boss 302 has been fully re-engineered and features an upgraded exterior, interior, brakes and suspension, as well as a tweaked V8 engine now producing 444 hp. In addition, the automaker upgraded the steering systems in all Mustangs, which now come equipped with selectable Electronic Power Assist Steering (EPAS). Other new Mustang features for 2012 include illuminated dual visor vanity mirrors, a universal garage door opener and multipurpose sun visor storage, as well as a new Lava Red Metallic color, available in limited quantities. In addition, Ford offers two new options packages for 2012, including the Reverse Sensing System and Security Package, and the HID Headlamps and Security Package.

The current-generation Mustang comes in a wide range of trims, including V6-powered Base, V6 Premium, V8-powered GT, GT Premium and now the Boss 302, a tribute to the original Boss from the late 1960s. All trims are available in either hardtop coupe or convertible versions except the Boss 302, which comes only as a hardtop. All Mustangs are driven through the rear wheels, and retain the 2+2 format of the original 1960s versions, seating 4 passengers comfortably.

Refinements and aerodynamic improvements made to the Mustang in 2011 include a new front fascia, a taller air dam, underbody covers and an added rear decklid seal, which helped decrease drag by 3 percent. The Mustang's long hood, short rear deck and muscular styling still harken back to the era of the original "pony cars" and still continue to turn heads. Features like the distinctive Mustang grille, sidelines, three-bar taillights and hip above the rear wheels carry over familiar themes, while the aggressive stance, power-dome hood and dual exhaust pipes are more modern additions.

Outside, the Boss 302 also gets a front air splitter, brake cooling ducts and quad pipes with rear and side exits. The V6 and GT Convertible trims come equipped with a vinyl convertible top, while the GT Premium gets a cloth top with a soft boot for covering the top when it's retracted. Owners can also equip the Premium trims with a glass roof.

The Mustang's competitors continue to include the Dodge Charger, Dodge Challenger and Chevy’s slick-looking Camaro, though most reviewers think the Mustang leads the pack. In addition, with a wallet-friendly starting price, the Mustang delivers good overall value. 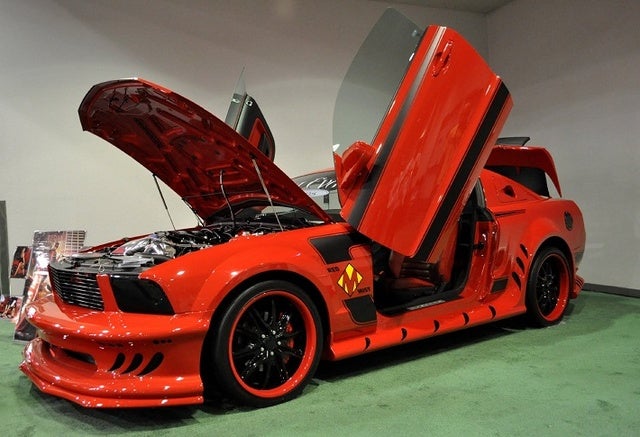 Base power for the Mustang comes from a 3.7-liter Duratec V6, which was introduced in 2011. Borrowed from the Lincoln MKS and MKT, the V6 received a redesigned cylinder head, an increase in compression and a new exhaust manifold, and it features twin independent variable camshaft timing, all of which result in a powerplant that generates 305 hp and 280 lb-ft of torque while still managing a class-leading 19/31 mpg when paired with a 6-speed automatic transmission. When mated with a 6-speed manual transmission, which comes as standard equipment in the V6, V6 Convertible, V6 Premium and V6 Premium Convertible trims, the engine still manages an impressive 19/29 mpg. For the record, the V6 generates just 10 hp shy of the V8 engine it replaced while delivering improved fuel economy.

For those seeking the true Mustang experience, though, the 5.0-liter V8 powerplant delivers the goods. Powering the GT, GT Convertible, GT Premium and GT Premium Convertible trims, it pumps out 412 hp and 390 lb-ft of torque. Paired with a 6-speed automatic transmission, it also posts class-leading fuel economy numbers of 18/25 mpg. With a 6-speed manual transmission, which comes standard on the GT trims, the V8 manages fuel economy numbers of 17/26 mpg. Like the V6, it features twin independent variable camshaft timing, which adjusts the valvetrain for maximum efficiency depending on driver inputs.

If there’s one thing that separates the Mustang from the pack, it’s the sweet note from that 302 V8 when it’s flat out on the open road or on the track. A retuned sound tube and unique quad exhaust system, with two rear and two side pipes, ensure the throaty growl expected from an engine and vehicle of this caliber. On a side note, V6-powered Mustangs are rated to tow up to 1,000 pounds, though it must be said that trailer towing is typically not among the priorities of Mustang owners.

No matter which engine or body style you choose, you won't be disappointed with the Mustang's ride or handling. Daily drivers as well as sports-car enthusiasts will find that the Mustang delivers on its heritage as a sport-oriented street car, with a tight, nimble ride and precise handling. In addition, despite the arrival of the 302 Boss, which naturally rules the roost in the performance category, reviewers and owners are heaping the most praise on trims powered by the V6 engine, which delivers a surprisingly quick, competent ride, with not a hint that the vehicle is underpowered. An available Performance Package for the V6 trims adds upgraded sway bars, front springs and front and rear calipers, as well as 19-inch wheels and tires, making V6 trims near equals of the V8-powered GT trims.

Ford updated the Mustang's suspension in 2011, adding larger anti-roll bars, a standard strut tower brace and new rear lower control arms and bushings for a firmer, more controlled ride. Brakes were upgraded as well, to 13.2-inch front discs, an increase of 0.8 inches over the previous year. Ford also offers a Brembo brake package for GT trims, with 14-inch front brakes. All V6 trims receive a limited-slip rear axle with a 2.73:1 ratio, while on GT trims the rear axle ratio increases to 3.15:1 (on trims equipped with the automatic transmission only). A 3.73 limited-slip rear axle comes standard on the Boss 302 and is available on the GT Coupe with manual transmission. The Boss also gets a unique suspension, steering, tuning and calibration, as well as 5-way adjustable shocks.

Testers do note some minor body lean in tight corners, as well as some flexing in convertible trims when throwing them around twisting roads. Overall, however, the Mustang remains firmly planted to the road while at the same time feeling light on its feet.

In addition, Ford made the controversial move of equipping the Mustang with an Electronic Power Assist Steering (EPAS) system for 2012, but reviewers generally agree that it was a positive move. Reports indicate that the new system's level of precision surpasses that of the old unit's. The new system, which helps improve fuel economy, offers selectable steering with Standard, Sport and Comfort settings. In addition, it automatically adjusts to suit weather and road conditions. 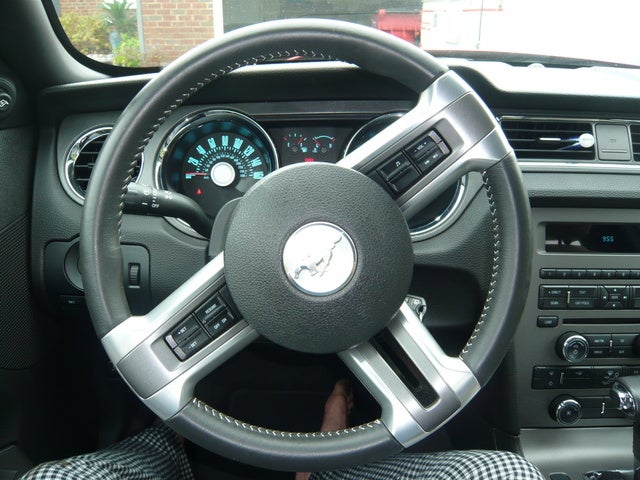 The Mustang has always been a better-looking car on the outside than on the inside, and that remains true for 2012, especially for lower-end trims. Door panels and even the steering wheel have a plasticky feel, although testers like the cloth upholstery in the base trims. Seats are comfortable, though some reviewers note the lack of a telescopic steering wheel, which can make it difficult for some drivers to find a comfortable seating position. Also, some testers find the layout of the controls a little confusing and note that the location of the shifter can interfere with access to some controls.

On the plus side, the Mustang comes with a solid list of standard features, including air conditioning, cruise control, power windows and door locks, a 50/50-split fold-down rear seat, remote keyless entry and Ford's MyKey system, which enables owners to set limits for top speed and audio volume when other drivers are behind the wheel.

Numerous options packages are available for the Mustang, including the new HID Headlight and Security package, and the Mustang Club of America Edition, which includes a unique dark billet-style grille, foglights, a rear spoiler and unique appliques, stripes and floor mats. 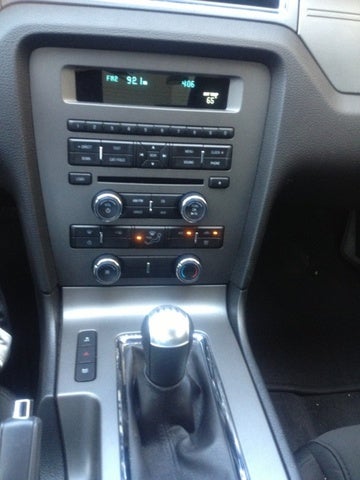 The 2012 Mustang receives a top rating of Good from the IIHS, although only frontal and side-impact tests were conducted on the vehicle. The Mustang received a Good rating for protecting passengers during front crashes and an Acceptable for protecting passengers in side crashes. Rollover and roof-strength crashes were not tested. The NHTSA gave the Mustang an overall rating of 4 out of 5 stars, which breaks down to 5 stars for rollover crashes and 4 stars for front, side and rear crashes.

All the common safety features, such as 4-wheel antilock brakes, as well as traction and stability control, are standard with the 2012 Mustang. Standard dual front side-mounted airbags and a post-collision safety system are in place for occupant protection. Premium trims additionally get standard airbag deployment notification with the SYNC system, while both GT trims as well as the Boss 302 come equipped with dusk-sensing headlights. Depending on the trim selected, optional safety features can include rear parking sensors and an active antitheft alarm.

Most owners agree that the current Mustang represents one of the best ever built by Ford. Performance, handling and fuel economy all impress owners, as does the Mustang's eye-catching styling. Owners in particular are raving about the V6 engine and are reporting decent fuel economy in the mid to high 20s even for V8-equipped trims. Many compare the Mustang favorably to sport-oriented vehicles from BMW, Audi and Acura. Interior ergonomics and electronics such as the SYNC system and Bluetooth get generally good marks from owners, although a few owners have reported issues with the SYNC system. In addition, many owners have customized their Mustangs with upgraded packages and options, while at the same time finding good deals from their local car dealers.

A few owners are reporting quality control issues with the Mustang, especially with the transmission. In addition, some owners note shift problems with the manual transmission. These problems appear to be isolated, however, and overwhelmingly owners give the 2012 Mustang a big thumbs up.

GuruT1MLB I chose the 2013 because it had fewer miles and care was taken by the previous owner.

Users ranked 2012 Ford Mustang against other cars which they drove/owned. Each ranking was based on 9 categories. Here is the summary of top rankings.

Have you driven a 2012 Ford Mustang?
Rank This Car

How Long Do I Have To Trade In My Car Or Sell It?

I bought a 2012 ford mustang coupe premium in september 2020. My car payments is $355 a month which is sky high. My car loan is 66 months. I been having a buyers remorseful crisis off and on since ...

which one is it?

849 views with 4 answers (last answer about a year ago)