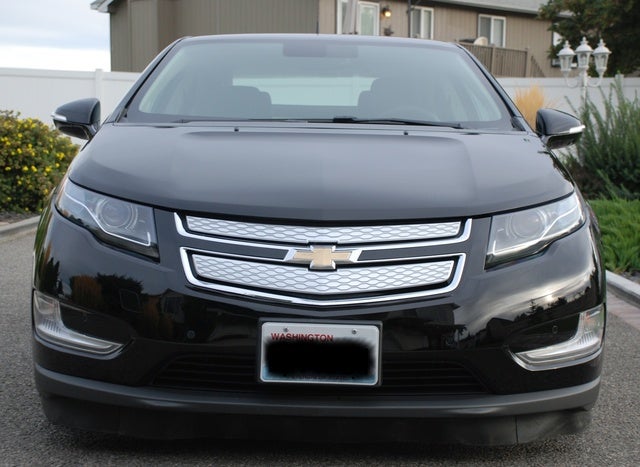 Chevy said they’d do it and they did. Despite a barely averted economic meltdown, vague, almost disingenuous advertising and nearly insurmountable technical obstacles, the 2012 Chevrolet Volt indicates that the plug-in hybrid hatchback sedan is here to stay. A somewhat subdued 2011 debut, not to mention a hefty introductory price, resulted in merely average sales of this 4-passenger ultra-hybrid. Rising fuel costs, however, plus a high-tech cabin, heady styling, and a well-wrought electric drivetrain, as well as an average of 92 mpg (in ordinary driving conditions) and an almost nonexistent environmental footprint, ought to see a boost in sales for 2012. The fact that Chevy has dropped the MSRP of the Volt’s only trim, known simply as the Base, by over $1,000 (to $39,145) doesn’t hurt, either. Beware, however, that the still-sizeable initial outlay on the 2012 Volt purchases only a 2-passenger rear seat, no power-adjustable front seating and fewer standard features. The Bose premium audio system and voice-activated navigation suite are no longer standard; instead, each is offered as a standalone option. Also, cargo space in this high-tech hatchback is a mere 10.6 cubic feet, though the folding rear seatback mitigates this lack of space to an extent.

Though king of the U.S. plug-in-hybrid hill in 2011, the 2012 Volt now faces some serious competition in Toyota’s new plug-in Prius PHV. Nissan’s all-electric Leaf, also a Volt rival, boasts zero emissions and no pesky gasoline-burning engine, but has a range of only 100 miles. The Volt, for which a home-based charger is recommended, can be recharged in an average of three hours with a 220-volt system and has a range of some 380 miles with judicious use of both gas and electric power.

A 111-kilowatt electric motor and single-speed direct drive power delivery system put out 149 hp and 273 lb-ft of torque in the 2012 Volt. A 1.4-liter inline 4-cylinder (I4) gasoline engine recharges the 16-kWh lithium-ion battery pack when needed on longer trips or when the daily plug-in is neglected, and the four-banger can also assist in providing power to the front wheels when cruising at higher speeds. Depending on driving habits and destination, the Volt can accelerate up to 100 mph for distances ranging from 25 to 50 miles on electric power alone. Should the battery become depleted, the I4 kicks in to recharge, while regenerative braking also adds some marginal charging power. Fuel efficiency, with conservative use of the I4, is estimated at a mighty impressive 95 mpg city/90 highway, though, again, these numbers reflect optimal driving conditions and habits.

Besides its burdensome price tag, owners of the 2011 Volt complain about its tiny cargo capacity, the necessity for a home recharging system and poor rearward visibility. The lack of standard leather upholstery and power-adjustable front seating also irks a number of owners, many of whom feel that, in this lofty price range, such items ought to be included as standard equipment. Owners do, however, give the Volt kudos for its laudable mileage, ultra low emissions, snappy looks, high-tech cabin and plethora of standard interior amenities. Acceleration, ride and handling all come in for their share of praise, as does the notable lack of engine racket engendered by electric power.

What's your take on the 2012 Chevrolet Volt?

Btown2424 The 2012 Chevy volt has been a reliable, easy to live with vehicle. Being able to pretty much drive to work and home on electric alone saved money at the pumps. Oil changes are very few, depending on how much the gasoline engine is used. Really makes a great used vehicle.

Users ranked 2012 Chevrolet Volt against other cars which they drove/owned. Each ranking was based on 9 categories. Here is the summary of top rankings.

Have you driven a 2012 Chevrolet Volt?
Rank This Car

What Does CarGurus Instant Market Mean

so my car is up / I can see number of view's number of save's / Why can I not communicate with prospective byer's I can read there questions there is no place for me to send a response. the only opt...

Why Does The Chevy Volt Not Show Up If The Hybrid Is Selected In The Filter...

I am listing a Chevrolet Volt which is a Plug in Hybrid. If you are searching by car type SEDAN and select Hybrid in the "Fuel Type" the volt does not show up. Also there is no selection for electric...