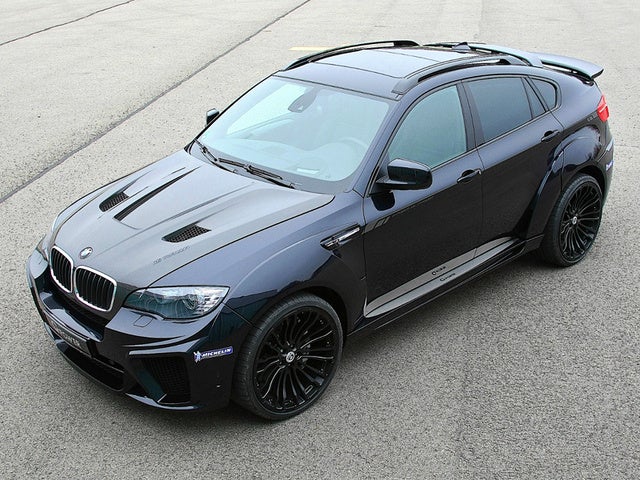 Take what looks like your typical mid-eighties fastback sedan, load it up with over 5,000 pounds of gizmos, technology and leather, cram in a bodacious turbocharged V8 and some nifty moves to behold the 2012 BMW X6 M Sports Activity Coupe. This miscast 4-passenger, 4-door…well, 5 doors, actually…crossover can’t quite be figured out by reviewers, what with over-the-top acceleration, all sorts of luxury-oriented amenities and its retro look. Then, too, a bunch of suspension, braking and drivetrain electronics make for some surprising agility, though it’s recommended that drivers don’t try to cut things too fine on cliff-edge switchbacks with this overweight beast. Nevertheless, the single trim, (labeled the Base by a majority of reviews) comes loaded to the gills with traditionally high-end standard goodies, a sport-tuned suspension and, of course, Beemer’s xDrive “intelligent” all-wheel-drive (AWD) system. Don’t look for anything new in the X6 M this year, but do bring plenty of money if plans include more than kicking the tires; these things don’t come cheap.

In any case, giving the 2012 X6 M its go is a direct-injected (DI) 4.4-liter twin-turbocharged V8 powerplant that mates with the standard 8-speed shiftable automatic transmission. This combo throws down 555 hp and 501 lb-ft of torque, good enough to get what BMW claims is a 0-60 time of 4.3 seconds; not too shabby for a 2½-ton crossover. The gearbox, meantime, features descent control and a brake hill holder, while the xDrive AWD is managed by a mechanical center differential and a center and rear limited-slip differential. Beemer’s self-proclaimed intelligent AWD throws most of the torque to the rear wheels in normal driving, but can instantaneously transfer power from the wheels that slip to those that grip, front and/or rear, when a loss of traction is detected. Beware, however, that the xDrive system is not designed for any sort of off-road adventures.

Look for standard Adaptive Drive with dynamic damping control and active roll stability in the sport-tuned suspension system, while pressing the steering-wheel-mounted M-Drive button will quickly bring a smile as it adapts engine, torque and transmission response to varying road conditions, not to mention moods. Finally, despite variable valve timing (VVT), don’t expect mileage to be much better than 12 mpg city/17 highway. But if up to 6,600 pounds of trailer has to be to be towed, the properly equipped 2012 X6 M can handle it.

Traditionally, appearance, comfort and convenience features are what set the 2012 X6 M crossover apart from most of the rest. This high-end ute boasts 20-inch alloy wheels, a power sunroof and a power rear liftgate outside, while plenty of leather upholstery, leather and alloy accents, heated, power-adjustable sport front bucket seats and a leather steering wheel grace the inside. Of course, all power accessories, including heated, reverse-tilt power outside mirrors and remote keyless entry, are standard, as are cruise control, dual-zone climate control, a universal remote garage door opener, telescoping tilt-wheel steering and memory for driver's settings. The 600-watt audio system, meantime, sports a single-CD player, 16 speakers, iPod integration and a USB connection. Finally, this unique Sports Activity Coupe comes with a hard-drive-based navigation suite and BMW Assist communications bolstered by Bluetooth hands-free technology.

Options include rear-seat DVD entertainment, upgraded leather, a 6-CD changer, a head-up windshield display, a tiny third rear seat and satellite radio, either as standalones or in package form. Some of the more noteworthy available packages include a Premium Sound Package, the Rear Climate Package with four-zone climate control, the Cold Weather Package with heated steering wheel and heated rear seats, and the Driver Assist Package, featuring, among other things, a rear-view camera with panoramic Top View.