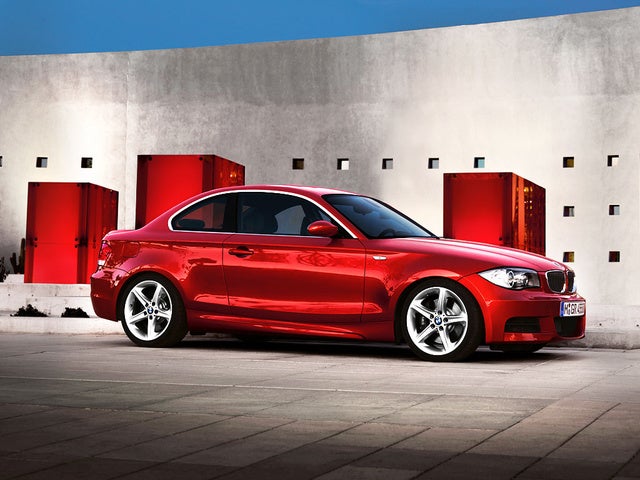 Average user score
4 ⁄ 5 stars
Based on 10 reviews
Review by Baug — This car is hysterically funny to drive. I bet these are gonna get some attention very soon. Thats a lot of car for the current price here in February 2020, dont neglect this littleadt, open the mu... Read more
Review by Guru6HDM2 — Wow car is so sweet it handles the road so good in that Sound just like a cool roadster.The top down is a whole new driving experience Read more
Bmw 135i Small Car - Big Fun by DJ — Small cars are always fun! Especially with a bombshell under the hood in a rear wheel drive format! DCT tears through the gears adding to the driving experience of an already well balanced vehicle. 53... Read more

With little to prove and lots to love, the little BMW 1 Series has had a harder time than you’d think. People scoff at what they perceive as the “poor man’s Bimmer” and toss snide comments about not being able to afford a 3 Series. Anyone who’s been around BMW products for more than the last 10 years will remember when a BMW used to be a small, agile sled instead of a large, agile tank. BMW has tried hard to make sure comparisons are made between the 1 Series and the iconic 2002, but so far the scales have yet to even out.

Hoping to improve on its entry level a bit, the 1 Series gets some small changes in 2012, none of which should do much to change stubborn minds. The biggest change is the addition of the “Air Curtain,” an air duct integrated into the front fascia that channels air into the turbulence created by the spinning front wheels, thereby improving aerodynamics and hopefully fuel economy. It was first seen on the M versions of the 1 Series and is now standard across the line. It lends itself to the idea that BMW has been paying increased attention to customer complaints, as the 1 Series has never been a class leader when it comes to fuel economy – an important factor in the small-car class.

Even the base 3.0-liter inline 6-cylinder struggles a bit at the pump, pulling off 18 city mpg/28 highway with the required premium fuel. Losing the top and choosing the convertible option will drop 1 mpg off the highway figure in the base 128i, but the turbocharged, 3.0-liter, 135i will manage a bit better – 20/28 – even with the 70 horsepower and 100 lb-ft of torque you gain with the turbo. Both the 128i and the 135i come standard with a 6-speed manual transmission, but an automatic is an option. The 128i gets a 6-speed traditional automatic, while the 135i gets BMW’s double-clutch automatic, so all the sport isn’t wrested from her hips.

There are aesthetic changes as well, with new sculpting surrounding head- and taillights, as well as some updated switchgear inside. There’s also a new option of Gloss White interior trim, which smacks a bit too much of late-to-the-party mid-'80s New Wave for my taste. Otherwise, things on the inside haven’t changed, and this highlights another of the 1 Series’ shortcomings – space. Yes, a small car isn’t known for having oodles of room inside, but for taller drivers like myself the 1 Series is cramped. Reviewers have called out the bolstering on the front seats for being too confining for heavier occupants, but even those of us broader of chest will start to feel as though they can’t breathe after a bit, and rear seat passengers will have to deal with rubbing shoulders throughout the entire ride. This is only exacerbated in the convertible. Still, four average-size adults should have no problem with head, leg or shoulder room.

The 1 Series offers a modicum of trunk space – 10 cubic feet – with an awkward opening, and the convertible gives up 1.6 cubic feet with the top stowed. At least this means you’ll have a hard time overloading the trunk and upsetting the balance of the vehicle. Even with the 128i’s base suspension and 16-inch wheels, the 1 Series holds the road with confidence and comfort, absorbing most irregularities with enough feedback to inform but not annoy. The sport suspension and 18-inch alloys on the 135i do reverberate inconsistencies with more insistence, but it still avoids being tiring even on long trips.

Sadly, something will wear with you after a while with the 1 Series. With an entry price that cracks $30 thousand and a fuel economy rating that comes close to the worst in the class, the comparisons to the BMW 2002 are difficult. After all, there are some trims here that come close to $40 thousand, and for 5 thousand less you could drive away in a 328i. At that point, you have to wonder what you’re sacrificing and at what cost.

Users ranked 2012 BMW 1 Series against other cars which they drove/owned. Each ranking was based on 9 categories. Here is the summary of top rankings.

I Do Not See My Car Listed After Purchasing The Service

I just purchased the service to show my car on Cargurus and I do not see my car listed. I am a private seller.

How Does CarGurus Make A Determination Of Being A One Owner Car?

I am in the process of corresponding with a seller and ran a Carfax which shows the first odometer reading as 17,343. When I asked the seller this question they said "That's because they sold it over...

MY Engine Light Keeps Coming On After I Have Had Four 02 Sensors, Two Catal...

How To Improve Gas Mileage?

my new bmw 1 series convertible is averaging 17 mpg . can any adjustments be made? my mileage is 600 miles.