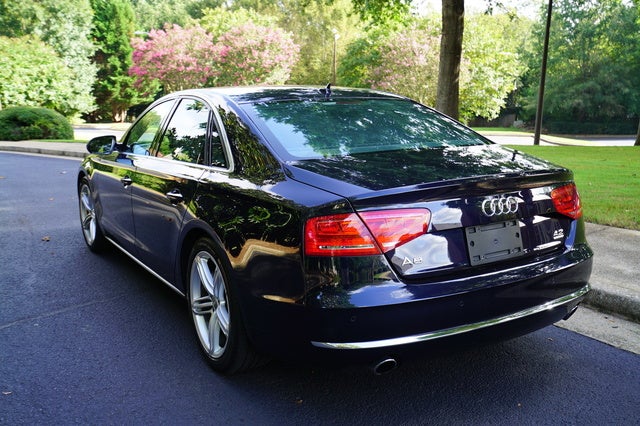 Average user score
4.5 ⁄ 5 stars
Based on 7 reviews
Only Selling Because Moving Into Nyc And Not Keeping Any Cars. by CaddySeller — The car did everything we asked of it in a sleek, luxurious way. I particularly like having it WIFI equipped so that you can even run a laptop from the car. The downside its that its big and you ne... Read more
The One And Only Car by Valon — Very fun to drive. Amazlily Quick 0 to 60 to 2.8 seconds wow the back seats could be a lot bigger. Very relible brakes no running over anyone with this car so it is an amazing car altogeter Very Good Read more
Review by GuruZ5DH8 — I purchased the vehicle! Features excellent Value = Okay Missing a defect free computer 7 Series BMW Read more

The Audi A8, already held in high regard as the automaker’s flagship in the full-size luxury sedan world, steps up its game even further for 2012. Performance, class and technological advances have been just a few of the vehicle’s trademarks in recent years, and Audi keeps marching forward with the 2012 Audi A8.

Audi pairs up performance and pampering just about as well as anybody in the game with the 2012 Audi A8, the experts note. They cite its acceleration and the comfortable ride it delivers, for either a jaunt around town or a cross-country cruise, and note that despite being a bit on the heavy side (even with an all-aluminum frame it pushes 4,500 pounds), it’s a fun car to drive.

Fun to drive, fun to be driven around in. Heck, one reviewer points out that the individual seats in the rear of the 2012 Audi A8 L especially are so roomy and plush – options for the right-side seat include a footrest, while the lucky person on the left gets massage and recline functions – that both seats up front may end up going to the folks who draw the short straws. The A8, it seems, may singlehandedly eliminate the fight over riding shotgun.

Reviewers appreciate the classy yet understated looks of the 2012 Audi A8, but the high-tech goodies the manufacturer loads into the vehicle are the real eye and attention grabbers. The A8 L comes with heated front seats, powered everything and a navigation system. The navigation and sound systems can be controlled by voice commands or a touchpad, much like that of a laptop computer.

Audi sends the A8 out with a perfectly fine Bose sound system with an MP3 player, 6-CD changer and 12 speakers, but stereo aficionados can also opt for a Bang & Olufsen surround sound setup with a 1,400-watt amplifier and 19 speakers. A solar-panel sunroof, dual-pane security glass, ventilated and massaging seats, and a rear seat entertainment center with a pair of 10-inch screens and individual audio controls are among the other options.

Pampered enough? Some reviewers do think the tech attack is a bit overdone and running the ship, er, car – the 2012 Audi A8 has a shifter that is designed to simulate the throttle on a high-end yacht – can be almost overwhelming.

Audi long has scored well in crash tests and continues to address safety with the 2012 A8. It comes with 4-wheel disc brakes, ABS, brake assist, traction and stability control, an in-trunk emergency release and a full array of airbags.

Users ranked 2012 Audi A8 against other cars which they drove/owned. Each ranking was based on 9 categories. Here is the summary of top rankings.

My 2012 audi a8 take a long time to crank over until i hit the gas, and sometime emits dark smoke from the exhaust pipe. Can someone please tell me where to start?

I got in my car this morning and my mmi screen went black after popping up. i have tried the 3 button reset, turning it on and off and disconnecting the 12v battery but still have the same problem...

How Do You Rate A Deal As Fare Deal?