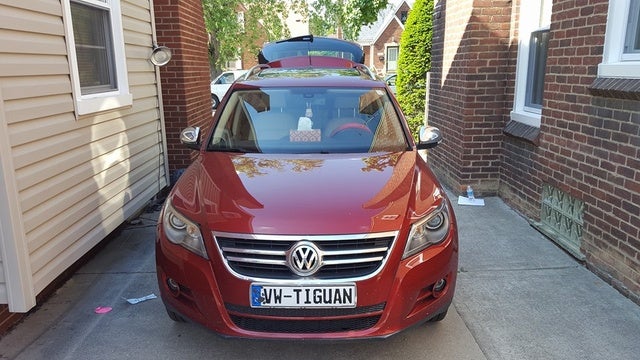 The 2011 Volkswagen Tiguan, not to be confused with its beefier older brother the Touareg, offers a fine option for those in the market for a smaller SUV. The Tiguan gets impressive marks for the sporty way its turbocharged engine gets the vehicle around.

It handles well and provides a nice, car-like ride, too. Reviewers and drivers find the 2011 Volkswagen Tiguan, which competes with the likes of the Honda CR-V and Toyota RAV4, stylish as well.

But yes, Volkswagen does come up with some strange-sounding names for its vehicles. A naming contest came up with this one, a combination of Tiger and Iguana and, truth be told, Tiguan is not a bad fit with the Touareg.

A 2.0-liter inline four-cylinder (I4) engine that produces 200 hp and 207 lb-ft of torque powers all trims - the S, SE, and SEL - of the Tiguan. All trims come standard with front-wheel drive (FWD), and VW’s all-wheel-drive (AWD) system is available in the SE and SEL versions. The Tiguan S has a six-speed manual transmission, and a six-speed automatic transmission that can be run manually is also available. That automatic-manual mix is standard in the upper trims. The SE and SEL trims with AWD use Volkswagen’s 4Motion six-speed automatic transmission.

The Tiguan, introduced in 2008, changes little beyond some cosmetics, with a redesigned front grille and new bumpers, for 2011. VW hopes the 2011 Tiguan’s fuel numbers improve a bit from the 2010's 19 mpg city and 26 highway for the manual and 18/24 for the automatic.

Rear seats in the 2011 Volkswagen Tiguan slide 6 inches forward or back, which gives the vehicle some flexibility in providing legroom for passengers or more storage area in the back. That may help somewhat resolve a complaint that the Tiguan does not have a whole lot of storage room. Interior controls are clearly marked and easy to use.

The Tiguan, like most of Volkswagen’s offerings, scores well in crash safety tests with its full array of airbags, standard four-wheel antilock brakes, and traction and stability control.

What's your take on the 2011 Volkswagen Tiguan?

Have you driven a 2011 Volkswagen Tiguan?
Rank This Car

I am looking to buy a used vw 2011 Tiguan and had a question regarding the turbo. This turbo was replaced at 80,000km and I am wondering if there is a good chance that this would occur again in anothe...

603 views with 4 answers (last answer about a year ago)

My Radio On My Tigua 2011 Froze It Won’t Change Channel Or Anything Did Any...

what year of engine for a vw tiguan can be swapped for a 2011 vw tiguan? or is it even possible?

If The Turbo Charge Is Damaged In A Vw Tigaun. Will The Car Still Run

How To Remove Ad