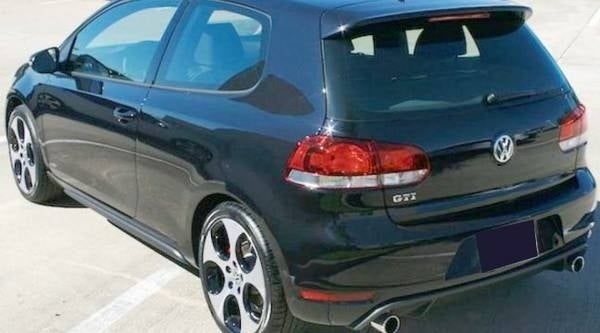 The 2011 Volkswagen GTI offers a spirited engine, tastefully retro styling and perhaps the best front-wheel-drive suspension setup in the industry.

For those expecting a stylish, more exclusive Golf with no penalties, the frustrations of a 2-door hatchback with 18-inch wheels and a sport suspension will be a sobering realization.

The GTI is back, and it truly is better than ever. Thankfully, this still won’t mean an end to the arguing, the grandstanding or even the excuses. As competitive as the automotive industry is, there will always be someone looking to prove why their car is better than yours. Good. That will give Volkswagen a reason to make the GTI even better.

There’s been a lot of justification tossed around on behalf of the GTI. As much excitement as there was last year for the release of this latest-generation GTI, many were disappointed to find it wasn’t the fastest ride on the block. And so the excuses were brought out to explain why the 2010 Golf GTI, while not the quickest around, was still the best hot hatch out there. Perhaps “excuses” is too harsh. With a class-leading interior and road-holding that puts cars twice as expensive to shame, “reasons” seems to be more appropriate. But speed, after all, is king, and the idea that the new engine in this newest GTI couldn’t keep up dug in a lot of sides.

Originally, Volkswagen had estimated the GTI’s 0-60 time as just under 7 seconds in a 3-door equipped with the 6-speed, DSG, automated manual transmission. Not bad for a little 4-cylinder hatchback, but not quick enough to keep up with the competition. Later, Road & Track did the same jaunt in just 6.1 seconds, dropping almost a full second off VW’s estimate. They were even able to push it to a 14.6-second quarter-mile. So much for speed issues.

Besides, who could really complain about a turbocharged, direct-injected, 2.0-liter 4-cylinder engine that still manages to deliver 207 lb-ft of torque at only 1,800 rpm? That is of course ignoring the wholly respectable 200 hp that shows up at 5,100 rpm. With the 6-speed manual it is slower, but it’s still capable of a 6.5-second 0-60 sprint from a 5-door, and that’s not bad either. Best of all, you’ll still get 21/31 mpg with the 6-speed and 24/33 mpg with the DSG, although VW recommends you grab the premium pump.

There’s so very little to be said about the GTI here – it’s very simply one of the best-handling FWD cars out there. It sticks long after others would let go, and if you push it even further it’ll turn into a mobile tripod. The stiff suspension helps it hold but can provide some unwanted feedback over sharper bumps as they reverberate sharply. A short wheelbase both helps and hurts, as turn-in is immediate but sometimes unwanted. All part of the fun.

With speed and handling out of the way, those excuses or reasons suddenly mean even more, now that they’re compliments rather than justifications. The GTI does turn quicker than a greased go-kart. And it does have an interior that looks like it was pulled out of a luxury sedan rather than an economy hatchback – excepting the plaid cloth seat inserts that hearken back to the GTI of old.

No, there was nothing wrong with the GTI from the beginning, and VW knew it. This could explain why the changes for 2011 amount to trim-level shuffling. For the most part, trim names of this 3- or 5-door hatchback revolve around the options they add. Base trims come with a leather-wrapped steering wheel and heated front bucket seats, a full power package with heated power mirrors and integrated turn signals. Traction and stability control are standard, as well as 18-inch alloys and antilock 4-wheel discs. Anything but base. The Base with Sunroof trim predictably adds a sunroof, while Base with Sunroof and Navigation similarly requires no explanation, but both come with an upgraded sound system, and the latter gets steering-linked bi-xenon headlights. For top-tier status, the Autobahn offers leather upholstery and trim, Smart Key entry and pushbutton ignition as well as an upgraded Dynaudio sound system.

The GTI is about as quiet as you’d expect from a sporty hatch, with neither engine, wind nor road noise intruding excessively. Tires can get a bit loud, especially over rough surfaces, but this is expected as well.

What is unexpected is the room you’ll find in the GTI. Front seats offer an abundance of leg- and headroom thanks to extra-long seat travel and cavernous space above that will allow even those over 6 feet tall to sit comfortably beneath the sunroof – no easy feat. Rear seats offer a similar experience, with only tall tandem arrangements causing problems. With the 4-door setup, things get even easier.

Given the GTI’s handling prowess, supportive seats are a welcome addition, and they hold you with confidence even in tight turns. Still, they manage to be all-day comfortable should you decide to hit the open road for a bit.

In keeping with the rest of the features list, the GTI comes with a long list of standard safety features regardless of trim. Six standard airbags, 4-wheel antilock discs, brake assist, traction and stability control are all part of the package, not forgetting daytime running lights.

National Highway Traffic Safety Administration (NHSTA) test results are not available for the 2011 GTI, but the Insurance Institute for Highway Safety (IIHS) has awarded the GTI its highest rating of Good for all test categories, excepting Right Leg/Foot, which received a Marginal rating.

With the 2011 GTI, there’s a lot to be happy about. An engine that begs to be pushed, a suspension that can take more than you can give, and an interior that lets you know the mechanical bits aren’t the only thing they spent money designing. And of course, there’s nostalgia – notoriously hard to price. Hatchback bodystyle gives true sport utility and style to boot. The biggest complaint is regarding the too-stiff ride, but there are lesser Golfs that fulfill that role.

What's your take on the 2011 Volkswagen Golf GTI?

Have you driven a 2011 Volkswagen Golf GTI?
Rank This Car

How Did My Car Price Go From A "Fair Deal" About A Week Ago To "high Price"...

I have a car listed and now your system has changed its price rating drastically.Why is that?

I am having a problem for 2 days now. My key is stuck in ignition it turns fine and starts. Just when I want to remove it it does not come out. It only comes out when I disconnect the battery. Its ...

what does the dashboard light that is yellow looks like a lil gernade with a ! point in the middle and lines like the sun around it thanks

I'm looking into putting an SPM Catback Track Kit (http://www.drivespm.com/vw-sp... kit/)onto my MK6 GTI. I love the sound of it but i'm concerned I'll get targeted with a noise violation and I don'...

Good Mornings...I Got A Golf 6 GTI And My Oil Light Keeps Comming On In The...