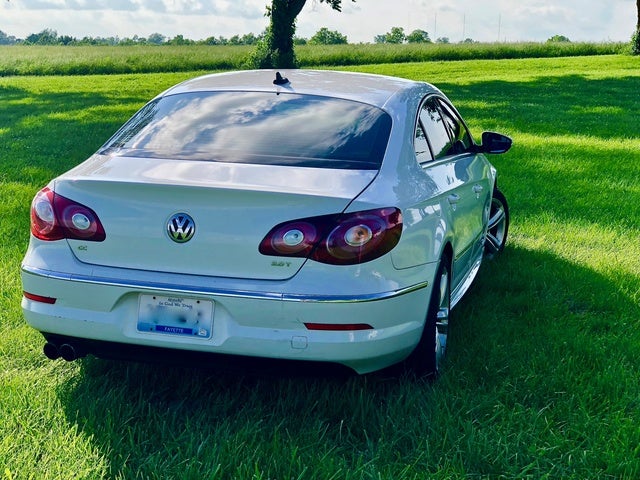 The 2011 Volkswagen CC offers two stellar engines, a pleasantly balanced suspension, and superior build quality for what might be the best value in the class.

An unrefined automated manual being the sole option for the Luxury trim is a major disappointment in the 2011 Volkswagen CC.

The Volkswagen CC is a refreshing entry into the premium midsize market, offering the handling, styling, and efficiency of a coupe with the size and luxury of a larger sedan. It’s a shame the Luxury trim is available only with the inadequate automated manual, as it’s a big jump between the Sport and the VR6 4Motion trims. If Volkswagen makes the six-speed automatic available in the Luxury trim, the CC could really be unstoppable.

Volkswagen’s Comfort Coupé (CC) sees some shuffling of trim level options and features in 2011 and drops the VR6 Sport trim, but otherwise sees little changes. This four-door, four-seat coupe is a modified Passat, offering sedan proportions and coupe styling in three trim levels now that the VR6 Sport trim is no more.

In all, the CC offers inline-four (I4) or V6 power, three six-speed transmissions, and front- (FWD) or all-wheel-drive (AWD) configurations. Significant options and features changes include the deletion of leather as an option in I4-powered trims, the Sport trim no longer getting foglights as a standard feature, and the Dynaudio Sound System being available only with the AWD VR6 4Motion trim. The VR6 4Motion also gets heated and ventilated front leather seats. Rear-side thorax airbags have also been deleted across the lineup.

A 200-hp, 2.0-liter, turbocharged I4 is the base offering here, an engine that accelerates briskly after a slight pause that is exacerbated by the optional six-speed automated manual. Luckily the superior six-speed manual transmission is made available for the Sport trim, but those who lean toward Luxury will be stuck with the clunky automated manual that is prone to lagging. Both trims have a FWD configuration.

Fuel economy at least is nothing to complain about here, with 21/31 mpg being the EPA estimate for the six-speed manual, while the automated manual gains 1 mpg around town. Volkswagen recommends but doesn’t require premium-grade gasoline for both the 2.0-liter I4 and the 3.6-liter V6.

In 2011, that V6 will be available only in the VR6 4Motion, which thankfully also gets the six-speed automatic, and not the automated manual. Here, the automatic is a much better option, offering more precise power delivery and quick, confident shifts. The V6, with its 280 horses and 266 lb-ft of torque, is noticeably stronger off the line than the 2.0, suffering from none of the turbo lag of its smaller brother. There’s a big penalty for performance here, with an estimated 17/25 fuel economy rating, still with the recommended premium fuel.

The CC’s longer platform delivers confident and stable handling at speed, with little disturbance due to wind or rough pavement. Only the harshest of imperfections are noticed, and given the impressive combination of performance and comfort, this is nothing to complain about. Even sharp turns are handled with a minimum of lean, as the suspension absorbs the energy as you dive into corners with ease. 17-inch alloys provide plenty of grip – and plenty of noise as well – and the upgraded 18-inchers that come with the VR6 4Motion trim increase both accordingly. Traction and stability control are standard here as well as brake assist, and the CC stops with confidence, delivering a solid but not harsh pedal feel.

Comfort and quality are both high here, with a few notable exceptions. Road and tire noise both permeate the cabin obtrusively and annoyingly, in definite contrast to the level of quality seen here. Also, the CC’s stylishly raked rear roofline does impede on both visibility to the rear and available headroom. Taller occupants will find themselves hunching over, struggling to make the four-passenger capacity a reality.

With that in mind, those who don’t often find themselves ducking under doorways will be rewarded with comfortable and supportive seats that do just as well in the twisties as they do on the long-haul. Interior materials are also a pleasant surprise, superseding many competitors in both quality and construction. Fake metal trim that’s actually plastic isn’t overly garish, and at least class-appropriate, but the actual metal trim in the VR6 4Motion is a substantial upgrade.

Some complaints have been heard about the CC's navigation system, no longer available in the Sport trim in 2011, as its placement has been noted as a bit low for easy reading.

All CC trims come standard with traction and stability control, four-wheel antilocks with brake assist, daytime running lights, and six standard airbags. While the NHTSA has not yet reviewed the 2011 Volkswagen CC under its new guidelines, 2010 saw it earn a four-star rating in all categories except side impacts involving the driver, in which it earned five stars. The IIHS has reviewed the 2011 Volkswagen CC and awarded its highest rating in all tests.

Owners have been very pleased with the Volkswagen CC, with two stellar engines as well as two competent transmissions. The automated manual has received many complaints and really mars the overall experience of the Luxury trim, as it’s the only option available. Rear visibility and headroom have also been sore spots, not to mention the excessive road and tire noise. Otherwise the CC provides an exceptional example of what a premium midsize can be, with an overall fit and finish that belongs to a higher class of vehicle.

Users ranked 2011 Volkswagen CC against other cars which they drove/owned. Each ranking was based on 9 categories. Here is the summary of top rankings.

Have you driven a 2011 Volkswagen CC?
Rank This Car

I recently took my 2011 VW CC to the dealership to remove locking lugnuts. They did it quickly and I drove away with no problems. 2 days later, after driving an hour out of town with no issues, I t...

I have a 2011 vw cc luxury with 60000 miles and i pressed on gas to overtake a slower and all of a sudden sluggish performance and epc light came on and check engine light started flashing so i l...

My trans code is MLZ. I was wondering if I could replace it with a different trans code.

102 views with 2 answers (last answer about a year ago)

Recently I drove my 11 cc a short distance to the vet. Once there I put in park engine still running. Then I started to feel a sputter at idle. Then the check engine light started to flash. Could th...

98 views with 1 answer (last answer about a year ago)

Change rear brakes without a computer

572 views with 3 answers (last answer about a year ago)