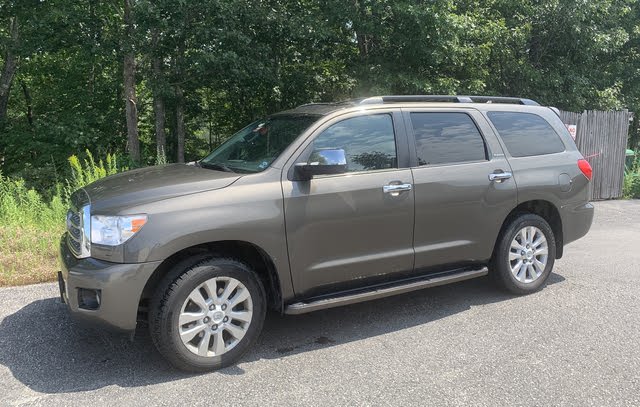 Weighing in at nearly three tons, the 2011 Sequoia is a thirsty brute that can be difficult to handle in tight quarters.

Buyers who need the capability of a true full-size SUV should look closely at Toyota's monster 2011 Sequoia. With a modern chassis, an adaptable interior, and a powerful optional V8 engine, the 2011 Sequoia can stand confidently alongside the established leaders in the shrinking large-SUV market. Though ho-hum looks and a lack of personality hamper the Sequoia's fun factor (especially when compared with Infiniti's funky new QX56), the largest Toyota model impresses with sparkling performance and competitive pricing.

Greatly enlarged a few years back and now possessing the right credentials for serious hauling, the 2011 Sequoia competes against the well-established Chevrolet Suburban and Ford Expedition. While the market for behemoth SUVs has contracted sharply of late, Toyota is betting that buyers who truly need the size and strength the Sequoia provides will find it a more refined entry than those from Ford and Chevy.

The 2011 Sequoia is based on Toyota's well-received Tundra full-size pickup. The Tundra's full ladder frame is mated to a massive all-steel body that can carry up to eight passengers. Under the hood, buyers can choose from two V8 engines, both offering advanced construction and plenty of power. Underneath, the Sequoia's four-wheel independent suspension contributes to a surprisingly comfortable ride.

Given the price of gas, few buyers these days are acquiring huge trucks as fashion statements. Most consumers spending upward of forty grand for a full-size SUV today are either families with lots of kids or boat owners with a large trailer. To that end the 2011 Sequoia is long on versatility and short on bling, featuring an amazingly adaptable interior and a generous tow rating. While good fuel economy and expressive styling aren't on the menu, the 2011 Sequoia offers nearly everything else that today's big SUV buyer demands. 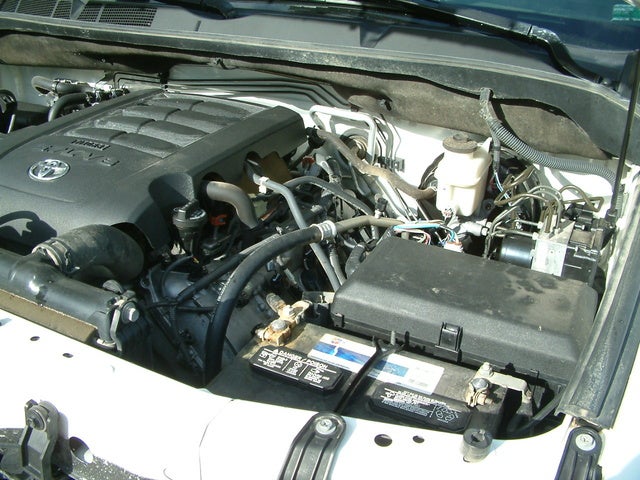 Given that neither Ford nor Chevrolet is in the habit of installing luxury car engines in their truck lines, the 2011 Sequoia has what may be the most refined powertrain package ever offered in an SUV. While the iron block, 16-valve, pushrod motors that live under the hoods of the Expedition and Suburban make decent power, neither one can approach the velvety smoothness that the Sequoia's more sophisticated engines offer. Base Sequoias come equipped with an all-aluminum 4.6-liter V8 that's lifted nearly untouched from the Lexus LS 460 sedan. This high-tech motor produces 310 hp and 327 lb-ft of torque and breathes through 32 valves actuated by overhead camshafts with variable intake and exhaust timing. The Sequoia's optional 5.7-liter motor (standard in up-level trims) ups the ante with 381 hp and a massive 401 lb-ft of torque.

If you aren't towing anything and want to save some gas, a base Sequoia might fit the bill. While it's admirably smooth, the 4.6-liter engine struggles a bit under a full load. The 5.7-liter's wider power band and abundance of torque transform the Sequoia into some kind of bizarre SUV hot rod. Like a 300-pound NFL lineman running the 40-yard dash, the 5.7-liter Sequoia accelerates from 0-60 mph in a scant 6.6 seconds. When properly equipped the 5.7-liter Sequoia can tow up to 10,000 pounds, nearly as much as the class-leading three-quarter-ton Suburban.

All 2011 Sequoias get a six-speed automatic transmission as standard equipment. Smooth, timely shifts are the order of the day, and the gearbox's manual control feature and tow/haul mode should prove a boon to those pulling trailers. The Sequoia is offered with either rear-wheel or four-wheel drive, the latter utilizing an electronically shifted low-range transfer case that is capable of providing substantial traction on- or off-road.

For the 2011 Sequoia, Toyota has taken a page from Ford's book and fitted a four-wheel independent suspension. Consisting of upper and lower control arms front and rear, this sophisticated setup is relatively rare among full-size trucks and pays significant dividends in packaging and handling. Featuring coil springs rather than the more common torsion-bar or leaf spring configuration, the 2011 Sequoia delivers a downright supple ride. Both large and small road imperfections are dealt with effortlessly, and the generous suspension travel should prove useful off-road.

While no one will mistake the 2011 Sequoia for a sports car, the big SUV handles with uncommon agility. The independent suspension allows for much greater control in challenging corners, and the adjustable shock dampers (available on upper trim lines) do an admirable job of limiting body roll. Toyota fits the Sequoia with a full suite of handling aids that should keep it on an even keel in emergency maneuvers, though some have criticized the VSC stability program for intervening too early. Massive, 13.9-inch vented front disc brakes haul the 2011 Sequoia to a stop with confidence, though the pedal gets rather mushy with repeated application.

Cavernous doesn't begin to describe the 2011 Sequoia's interior. The independent rear suspension design places the axle and its associated hardware closer to the ground, allowing for a wide, low floor. While Ford and Chevy offer their large SUVs in both regular- and extended-length versions, the 2011 Sequoia splits the difference with a 122-inch wheelbase. With buckets up front and bench seating in the second and third rows, base Sequoias can carry eight passengers in comfort. Pricier trims get second-row captain's chairs that limit seating capacity to seven. Entry and egress to the third row is excellent, courtesy of a well-conceived flip-and-fold seat arrangement. The power tailgate window is a neat touch, as are the optional power-folding seats that allow owners to stow the back bench at the touch of a button.

Given that it offers 121 cubic feet of space, it's no surprise that the 2011 Sequoia has plenty of leg, head, and elbow room in all three seating rows. Indeed the ultra-wide interior is so spacious that it forces drivers to stretch far across the dash to actuate the radio and climate controls. That quibble aside, most of the 2011 Sequoia's ergonomics are well thought out and intuitive. The excellent ventilation system can heat or cool the huge space very quickly and features a third zone for the rear seat passengers. Like the exterior, the Sequoia's interior is more about function than style. Though the rather plain dash is borrowed from the Tundra, most of the plastics feature an expensive-looking low-gloss sheen, and everything is tightly screwed down.

With family hauling as its mission, it's no surprise that Toyota has fitted the 2011 Sequoia with nearly every safety feature known to man. Dual front, side, and curtain airbags are standard, as is an innovative knee airbag that helps prevent leg injuries in a frontal collision. Standard ABS brakes with electronic brakeforce distribution are paired with stability and traction control systems that help enable the big Sequoia to stay shiny side up. While the government has yet to publish star ratings for the new Sequoia, a close look at the crash-test footage reveals a strong structure that does a good job of preventing intrusion into the cabin space.

Toyota Sequoia owners are effusive in their praise of the SUV's considerable abilities. The Sequoia's immense size allows for comfortable family hauling, though some owners note that it can make parking a chore. Buyers also laud the Sequoia's power and torque, especially when equipped with the 5.7-liter engine. Nearly everyone is impressed by the power liftgate and its roll-down window. About the only criticism that owners voice is over gas mileage - even an unladen 4.6-liter Sequoia drinks fuel at an alarming rate.

What's your take on the 2011 Toyota Sequoia?

GuruKR1HH I Love It! I could not be happier, except in my Marriage

Have you driven a 2011 Toyota Sequoia?
Rank This Car

My 2011 Sequoia (119,000 mi) has started squealing at intermittent times. Sounds at first if it's the radio when I drive by power lines, but when I turn the radio off, it still whines/buzzes. It st...

What Tires Would You Recommend For 2011 Toyota Sequoia SR5 4x4