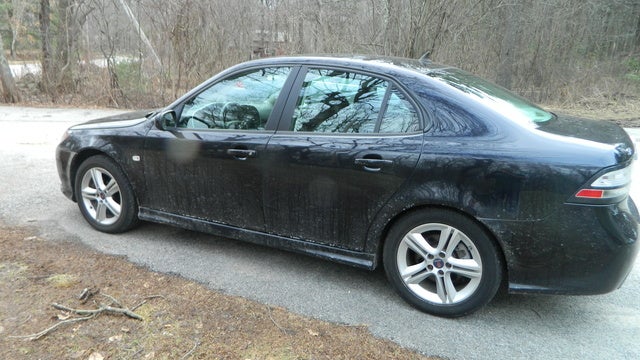 Once more into the breach dodders the 2011 Saab 9-3 in its luxury sedan and convertible coupe variations. These venerable relics, now in their eighth year, are essentially unchanged from 2010, though Saab, now owned by the Netherlands-based Spyker Company, predicts a complete redesign within the next year or so. Of middling design and performance, and certainly below the expected luxury standards of many consumers, the 9-3 lineup is nonetheless considered a bargain by reviewers and owners alike. This compact commuter is available in two body styles, the sedan and the convertible coupe, with both offered in either a Base or Aero trim, and each is delivered with a peppy turbocharged inline 4-cylinder engine (I4). The five-passenger 9-3 line offers Euro-style looks and handling that, while compelling, fail to overwhelm. One thing to be said for this aging trim is that it remains a true Saab, untainted by the Swedish automaker’s recently dissolved and somewhat ill-conceived marriage to General Motors.

In any case, the 2011 version of the 9-3 is presented with standard front-wheel drive, with only the sedan trims available to be equipped with Saab’s exclusive XWD, essentially an all-wheel-drive (AWD) configuration. Convertible trims come with a standard power-down soft top but only 12.4 cubic feet of luggage capacity, while sedans, with no convertible top stowage to complicate things, offer 15 cubic feet of trunk space. Competent agility, meantime, has been a trademark of the 9-3 lineup from its inception, but ride comfort, at least according to most reviews, leaves much to be desired. The turbocharged I4, however, is described by most reviewers as perfectly at home on the highway.

Alas, the 9-3 finds itself lined up against the likes of Audi’s A4 and A5 lineups, BMW’s 3 Series, Infiniti’s G, and the always formidable Mercedes-Benz C-Class. And then there’s that other Nordic automaker, Volvo, which offers its well-wrought S60 and S70 trims. About the only thing that Saab’s 9-3 can claim over the rest is a marginally lower base price of about $28,000.

The Haldex-sourced XWD system shoots torque to the front and rear axles as needed, while a mechanical center-mounted locking rear differential distributes up to 50% of torque between the two rear wheels, again, as needed.

Extras for the Base trim level include the Comfort Package, with several standard features found in the Aero, as well as an auto-dimming rear-view mirror that’s available for the Aero as a standalone option. Additionally, the Base sedan can be delivered with available 17-inch five-spoke alloy wheels. Meanwhile, options for the Aero level include the Premium Package, starring driver memory and rear parking assist sensors, as well as standalone extras such as 18-inch alloy wheels and DVD-based touchscreen navigation.

Owner experiences with the identical 2010 9-3 have been mostly positive, though some owners complain that agility is compromised a bit with too-light steering and that ride comfort still leaves much to be desired in a segment devoted to posh. Cramped rear seats and a bit of a letdown in overall cabin ambiance additionally come in for some owner frustration, with others grousing that mileage, while not horrific, isn’t as advertised. Notwithstanding a number of negatives, owners find the 9-3’s value, as well as its solid drivetrains, plethora of safety features, fighter-cockpit-like driver ergonomics and nimble, if not inspired, handling will overcome many of its perceived faults.

The Key Won't Turn, The Door Lock And Trunk Lock Will Not Work

Cannot open truck lid by remote, interior button release or even key and cannot put convertible top up on 2011 93 SAAB. All other functions are working. not sure what top do.

I received an email about the Saab 9-3 yesterday and Sunday that stated the cars price dropped 2,000.00...so my boyfriend and I Finally get a call from the dealership and now the sales person den...

I recently bought a used 2011 9-3 AWD and I tried without success to pair my iPhone with the car. I followed a You-Tube video instructing me to go to Settings and choose "phone". But in doing so, ...

Hello I have an issue with my car. I am trying to fix a code on my Saab. My airbag light comes on and I'm trying to remove. I get this code ACM B0083-05. It says sensor connector short/open to B+. ...