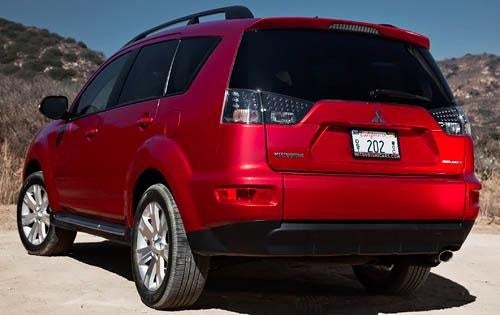 Average user score
3.6 ⁄ 5 stars
Based on 7 reviews
Awesome Car by Chruisg — Bought it as a single man and now I'm family man, it completed all my needs always, never gave me an issue. When brought it from Miami to Stamford, CT thought was going to give me problem with the sno... Read more
Review by Nessus — Smooth ride, great gas mileage, getting 26 mpg in the city. Nice features and seats re comfy. Plenty of room for what I need. All around great buy, recommended. Read more
Not A Bad Car by Sdb2007 — This is a great car for anyone wanting an SUV that is fuel efficient. We usually get about 25 MPG. It's a little small for this over packer on road trips. It was a great 1 kid car but I feel like we ... Read more

Brand new for 2011 is the Mitsubishi Outlander Sport. Essentially a downsized Outlander, this mini-ute adds a couple of available gizmos but loses the Outlander’s third-row seat, as well as over 20 feet of cargo space, resulting in 50 cubic feet with the rear seats folded. The Lancer-derived front grille and fascia give this family-friendly, five-passenger subcompact crossover a distinctly aggressive look, and available upgrades, such as LED cabin illumination, a larger rear spoiler, and various exterior chrome accents and corner extensions add to its curb appeal. An available rear-view camera, meanwhile, as well as its shorter wheelbase give the Outlander Sport a distinct edge over its larger cousin in maneuvering around crowded parking lots.

Two trim levels, the base ES and feature-rich SE, define the Outlander Sport lineup, with both powered by a tolerably efficient if somewhat punchless four-cylinder powerplant. Front-wheel drive (FWD) is standard for both trims, though the SE is available with full-time all-wheel-drive (AWD) traction. Mitsubishi heralds the Outlander Sport as a jauntier alternative to its ordinarily staid lineup, but according to many reviewers, rivals such as the Chevy Equinox, Honda CR-V, Kia Sportage, and Nissan Rogue offer more cargo space, refinement, and overall excitement, albeit for a significantly higher price.

The sole powerplant offering for the 2011 Outlander Sport is a variable-valve-timed 2.0-liter inline four-cylinder (I4) engine. A standard five-speed manual transmission graces the base ES, while the SE trim level gets delivered with a continuously variable transmission (CVT) that’s optional for the ES. With either transmission, expect 148 hp and a trailer-challenged 145 lb-ft of torque out of the four-banger, to the tune of 24/31 mpg with the five-speed stick, 25/31 with the CVT, and 24/29 from the SE AWD. The SE AWD's drivetrain includes a mechanical, center-mounted limited-slip differential.

Options include HDD navigation with 40GB of music storage and a rear-view camera, upgraded exterior trim, and a 6-CD changer across the lineup. The ES is also offered with available 16-inch alloy wheels, while the SE can be delivered with remote engine start, LED cabin illumination, and the Premium Package, featuring a 710-watt, nine-speaker Rockford-Fosgate premium audio system, satellite radio, power sunroof, and roof rails.

Owner input is obviously lacking for the spanking-new 2011 Outlander Sport, but early returns from professional reviewers are decidedly mixed. Tepid acceleration and dodgy handling are among this little crossover’s downsides, while spiffy looks, a smooth ride, and wallet-friendly base price try to compensate. Mitsubishi, meanwhile, has high hopes for this subcompact CUV, but time will tell.

What's your take on the 2011 Mitsubishi Outlander Sport?

Users ranked 2011 Mitsubishi Outlander Sport against other cars which they drove/owned. Each ranking was based on 9 categories. Here is the summary of top rankings.

Have you driven a 2011 Mitsubishi Outlander Sport?
Rank This Car

What Is The Instant Market Value Mean. Will You Purchase This Car For That ...

ignition key won't turn the igniton on to starting position

Key Not In Ignition But Car Thinks It Is

My Mitsubishi outlander spot 2011 thinks the key is in the ignition and it's not. I can't lock the doors. How do I fix this?

297 views with 1 answer (last answer about a year ago)

Why Would 2011 Outlander Sport With Dealer-installed Remote Start Suddenly ...

The vehicle had an after-market remote start installed by the dealer last December along with a new battery. In August, I went to start the car and there was no power - door locks, radio, lights, wi...

I bought an outlander sport 2011 The info button was stucked inside dash board for long time I succeed to release it but unfortunately the screen of mutli ifo display is off Is this issue relay o...