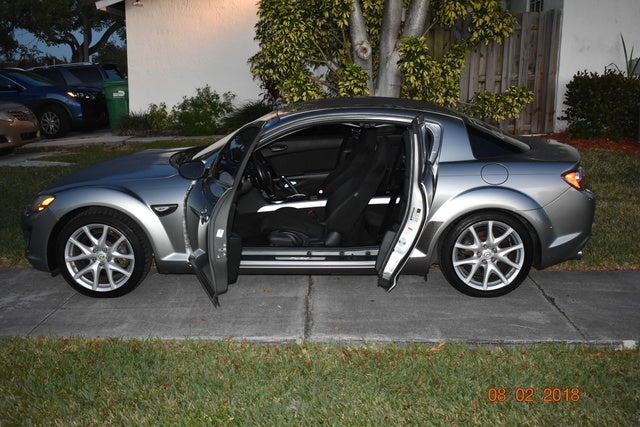 The Mazda RX-8 can rightfully be called an “accessible exotic,” with its funky rotary engine, suicide doors and handling that would normally cost closer to $100,000. Unfortunately, it also has those familiar exotic drawbacks of lackluster fuel economy and a frustratingly frequent maintenance regimen. Apparently its drawbacks outweighed its perceived positives, as the RX-8 will see its last year of production in 2011, both here and in Europe.

It’s a sad end for one of the last genuine sports cars on the market. A true enthusiast’s vehicle, the RX-8 embodies the idea that it’s more fun to drive a slow car fast than a fast car slow. Taken the wrong way, this sounds like the RX-8 is underpowered, but that simply isn’t true. With 232 hp and 159 lb-ft of torque, it’s certainly not going to impress on paper, but that’s never been its aim. Because those 232 horses don’t arrive until just 500 rpm shy of the 1.3-liter Renesis engine’s 9,000-rpm redline, this simply means the RX-8 needs to be driven with a certain manic passion only a high-revving engine can truly satiate. A torquey V8 can be driven well at any speed, but a rotary engine requires a dose of violence not otherwise necessary. Allow the revs to drop, and the 1.3-liter will begin to bog and dog and generally lose all its character and panache. It requires adversity to shine.

Adversity and some tight corners, to be fair. With its front/mid-engine and rear-wheel-drive layout, the RX-8 achieves a 52/48 front/rear weight distribution, and mounting the engine and fuel tank between the front and rear axles gives it delightfully neutral handling. The RX-8 sticks long after most drivers would lose their nerve. If that’s still not enough grip, the R3 trim adds 19-inch wheels, a sport suspension, and traction and stability control. All that, coupled with leather Recaro seats, make sure both you and the car stay on your intended path of travel, and all trims come with four-wheel antilock discs for that final level of security.

You have the option of a six-speed manual or shiftable automatic transmission with paddle shifters, although the latter will drop 20 horses from peak power output. It’ll also place peak power at 7,500 rather than 8,500 rpm, but that’s still a hell of a sacrifice when you’re starting at 232. Given a marginal increase of 1 mpg with the automatic, the manual is the obvious choice. It’s smooth and sure and greatly increases the overall fun of the RX-8, especially considering the limited-slip differential that comes with the manual but remains absent with the automatic in the Sport trim. Sadly, neither option offers impressive fuel mileage, with an optimistic estimate from the EPA of 16/22 mpg with the manual. Real-world testing puts averages much closer to the 16 than the 22 when proper flogging is being employed, although sedate highway travel will make 20+ possible. With the required premium fuel, this is by far the weak point of the RX-8.

But who buys an exotic for impressive mileage? No, no, no. An exotic is acquired because of its unique styling and quirky nature, because of its rarity and inaccessibility. An exotic requires skill to drive, or at least to drive well, and while the RX-8 won’t throw you into a corner at the first mistake, it’ll also reward you for knowing what you’re doing. Accessible exotic – fickle but forgiving.

And forgiving it is. In fact, you’ll find it hard to actually make the RX-8 lose control. Moving up to the Grand Touring trim, a limited-slip differential becomes standard fare regardless of transmission, with traction and stability control joining the fun for further increased confidence. The Grand Touring offers a few additional upgrades designed to increase luxury as well. With heated leather seats, a power sunroof and a Bose stereo, they’re going a ways toward making this a more comfortable ride, but it’s hard to overcome the limitations of the design. Taller drivers will never find enough headroom with or without the sunroof, and the seats offer comfortable support only for the one-third of Americans who aren’t considered overweight or obese. Anyone else will find themselves feeling a bit shoehorned. Thankfully ride comfort hasn’t been compromised, as the RX-8 delivers an impressive combination of handling and ride comfort that is rarely found in a car that turns this well. Even the sport suspension of the R3 trim fails to jar violently over harsh terrain. Automatic xenon headlights are a welcome feature, but are sadly absent in the Sport trim. Perhaps the most pleasant surprise comes in the navigation system, which fails to overcomplicate the seemingly simple task of helping you get where you’re going.

It’s a shame Mazda never got the Renesis engine quite right. With better fuel mileage and some reasonable oil consumption, the RX-8 could’ve made some bad noise in the automotive industry. With Mustang prices and Porsche handling, it could’ve inspired both ends of the spectrum to do better. As is, it’s another short-lived entry in rotary history. But with rumors of another car taking up the rotary mantle with Mazda’s next-generation 16x engine, perhaps that inspiration is yet to come.

I was at the gas station and since i didn't had much time with the veihle i as putting the regular gas then a friend told me that those car we supposed to put the premium so i did change the regula...