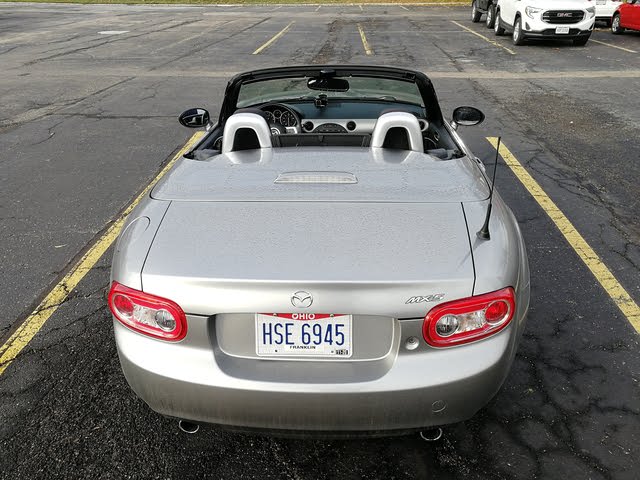 As cars have grown in size over the past several decades, so, too, has the MX-5, which weighs around 2,500 pounds and has only a 170-horsepower four-cylinder engine. But its lightness means that its power-to-weight ratio is high enough to make it fun for most drivers, according to reviews of last year's model.

The size of the car stands out, with the tiny 2011 Miata offering scant trunk space and an interior that can seem cozy to average-size adults and tight to those taller than 6 feet. That compact feel enhances handling at speed, with little lean into corners and good brakes. On the other hand, it can tail out a bit easily during spirited driving, a sign of a well-balanced car pushed too hard.

Oh, there is one option you won't be able to check off for the 2011 model: Yellow is no longer available. That means that red, silver, blue, copper red, and black are all still available. Other major options include a paddle-shifted automatic transmission. This cuts power a bit and could deter purists who enjoy one of the better manual gearboxes out there, but it's available and fairly crisp in its own right.

While the interior is snug and comforting, with newly redesigned seats and cupholders, you won't be bringing much along with you in the convertible. There's a scant 5.3 cubic feet of storage, which is enough for a bag of groceries, maybe two.

If you start with the Sport trim, you get 16-inch wheels and the fabric soft top, a six-speaker stereo system with an input for an MP3 player, and power windows and mirrors. The Touring trim adds 1 inch to the diameter of the wheels, remote keyless entry, and a trip computer. You'll also get access to your stereo from the steering wheel and power locks. And the Grand Touring trim caps it with a seven-speaker Bose sound system and automatic climate control. Leather seating is also available.

Keep in mind that at the Grand Touring level, there are leather accents in the interior as well, although the aluminum-look plastic in the lower trim lines doesn't look out of place, according to recent reviews. You also have the option of a retractable hard top for the Touring or Grand Touring trims, which provides a bit more stability and takes less buffeting in the wind.

The 2011 Mazda MX-5 Miata offers a two-seat roadster that focuses on one thing: making it fun for two people to be on the road with the top down. It can get a little noisy at top speeds, and its cargo room is cramped, but for just a few thousand dollars more than many midsize sedans to start, it's a great fit for the niche.

IS IT NECESSARY TO REPLACE THE TIMING BELT AT THIS INTERVAL AND HOW MUCH SHOULD I EXPECT TO HAVE TO PAY IF SO?

When I Look Up A Vehicle On Your Web Site, Under Accidents I Find (3), What...

my check engine light comes on then goes off, the convertible lights comes on too, it drives fine but it sits a lot in garage.

I have seen where RX-7,RX-8 spares will fit my Miata. What year would the RX7 or RX8 need to be. Can I safely use a 16" for a short time. Are there any other vehicle spare that would work? Some ...