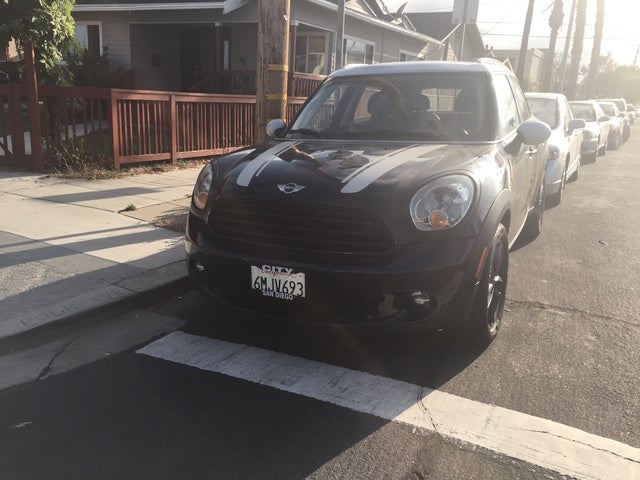 The new Countryman, cute as it is, ultimately fails to deliver on the MINI brand's promise of spirited performance and driver involvement.

All-new for 2011, the MINI Cooper Countryman takes the erstwhile British/German brand in a new direction, swapping performance for space, utility and available all-wheel drive. Though the crossover market is already crowded, the Countryman's swanky styling and upmarket positioning is likely to impress upwardly mobile buyers looking for something other than the usual Toyota, Honda or Nissan. MINI traditionalists, weaned on small, joyful little coupes new and old, might not be so amused given the Countryman's portly curb weight and lackluster handling.

Riding on a longer, beefier platform than the regular MINI Coupe, Clubman and Convertible models, the 2011 Countryman features a much taller ride height and four full doors. Though positioned as a British brand, Mini is owned by BMW, and the new Countryman is built (by specialty subcontractor Magna-Steyr) alongside X3s in Graz, Austria, far from Old Blighty. While the regular MINI Coupe and Convertible models, built in Oxford, still possess hints of old English charm, the 2011 Countryman exudes a distinctly more Teutonic vibe.

Though Sir Alec Issigonis, the packaging genius behind the original Mini, didn't live to see his brainchild's rebirth as a junior BMW, he would be impressed by how comfortably four passengers can fit within the Countryman's sculpted flanks. The high style and Continental flair would likewise appeal to his sensibilities, especially since he was not British but Greek. Yet the Countryman's inflated curb weight and suboptimal weight distribution seem at odds with the minimalist values Sir Alec so passionately espoused.

Three Countryman trims are offered: Base, the turbocharged S and the all-wheel-drive S ALL4. Engines carry over from the regular MINI range and are uniformly excellent, though base Countrymans (Countrymen?) aren't very quick. The long list of standard equipment includes numerous safety features, a plus for growing families. 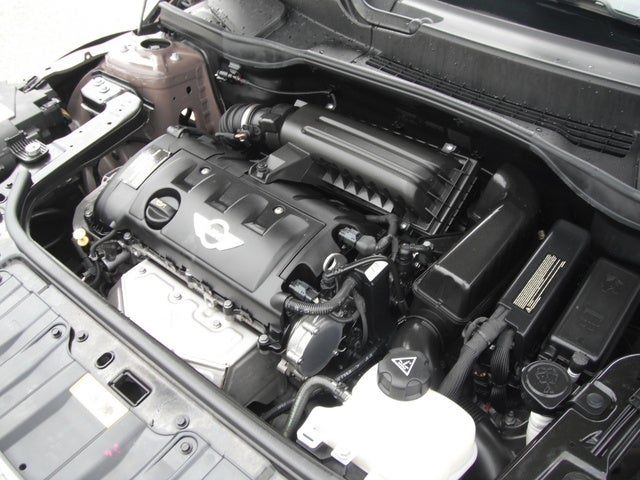 The 2011 MINI Countryman shares its 1.6-liter four-cylinder engine with the smaller MINI models. Base trims are naturally aspirated and make 121 hp and a rather pathetic 118 lb-ft of torque. Calling on the engine room for passing power in the entry-level Countryman makes you feel like Oliver Twist begging the headmaster for more porridge. Countryman S and S ALL4 trims benefit greatly from a turbocharged version of the all-aluminum inline-4. With a twin scroll turbo and 181 hp, the juiced-up motor enlivens the Countryman considerably, though more displacement would still be welcome.

Both engines get high marks for their smooth operation and excellent fuel economy. Buyers can choose from a six-speed manual gearbox or a conventional automatic with the same number of ratios. Though it's quite modern and smooth, the automatic is at pains to cope with the Countryman's lack of torque; smart buyers will opt for the more fun and efficient stick shift. Base and S trims are front-wheel drive, while the Countryman S ALL4 gets a computer-controlled all-wheel-drive system that provides ample traction on slick, snowy roads.

MINI engineers tried to maintain as much of the brand's trademark handling balance as possible in the 2011 Countryman. The four-wheel independent suspension consists of a MacPherson strut setup in front and a multi-link arrangement out back, a layout familiar to many BMW drivers. Despite the sophisticated hardware, the Countryman just can't find its footing in sharp bends. The heavy, tall body leans noticeably, and the front end is biased toward excessive understeer. While the steering is quick and sharp, the Countryman's mass dulls the chassis' responses.

The upside of the Countryman's somewhat wallowy suspension is a composed, comfortable ride. Large and small road imperfections are soaked up easily, and the rigid chassis feels plenty stout. Braking is excellent, courtesy of disc brakes at all four wheels and an advanced cornering brake control system. All 2011 Countryman trims ride on standard 17-inch alloy wheels, with 18-inchers optional. Also offered is a sport suspension package including stiffer dampers that do little to improve handling but nearly ruin the soft ride.

With its long wheelbase and high roofline, the 2011 Countryman possesses interior space heretofore unavailable to MINI buyers. The Countryman's unique cabin layout features four bucket seats and a long center console. While this prevents five passengers from being carried, it also makes the second row of seats more comfortable and inviting than a traditional bench. Head, leg and elbow room are all much improved over that of the MINI Coupe, though cargo space lags behind the long and low Clubman station wagon's.

The cabin's design theme mirrors that of other MINI models. The unusual dash layout (with a large central speedometer display) is charmingly different, until you realize how much easier conventional gauges are to read. Secondary switches and controls are also placed and labeled in a haphazard manner, presumably in a nostalgic attempt to replicate the poor British ergonomics of yore. The MINI Countryman's standard feature list is lengthy, with power accessories, a leather-wrapped steering wheel, keyless entry and an AM/FM/CD stereo with satellite radio all standard. Options include leather seats (a big upgrade over the standard vinyl), automatic climate control and GPS navigation.

With seven airbags and a full suite of electronic driver aids, the 2011 MINI Countryman clearly emphasizes occupant protection. In addition to the normal antilock setup, the binders feature electronic brakeforce distribution for better balance when stopping. Though the Countryman hasn't yet been crash-tested in the United States, it did earn a five-star rating in the rigorous European NCAP impact evaluation.

As an all-new model, the 2011 Countryman hasn't generated much buyer feedback yet. MINI devotees have expressed some doubt about the brand expanding to the crossover market. Otherwise, marketplace interest has been strong, and crossover buyers, though not starved for choice, seem pleased that such a dynamically styled new model is available.

What's your take on the 2011 MINI Countryman?

Users ranked 2011 MINI Countryman against other cars which they drove/owned. Each ranking was based on 9 categories. Here is the summary of top rankings.

Have you driven a 2011 MINI Countryman?
Rank This Car

I have a Mini Countryman S 2011 my engine sign keeps coming up and it reduces its power. it happens usually when im driving for a longtime or its snowing no idea why. I took it to a shop to have the...

Hi I have a 2011 Mini Cooper Countryman S .. The steering wheel has the telephone button..but no blue tooth option.. what can be done to work thru radio or can I buy attachments