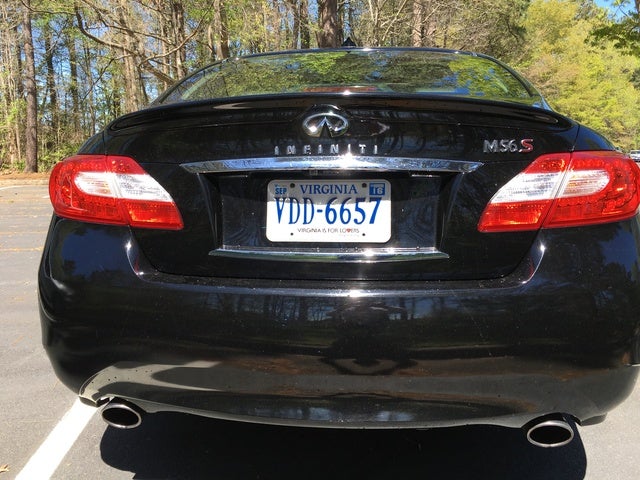 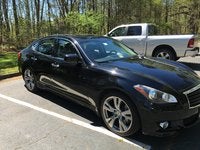 The belle of the Japanese automobile ball is here in the form of the 2011 Infiniti M56. This reinvention of the popular M45 luxury sedan features a sculpted torso that’s added a few inches of length, height, and width, yet manages to look trimmer than ever. Aggressive yet elegant curves and a softening of its once staid, predictable look hide these extra inches to present a leaner, meaner appearance well suited to its increased power and performance. This tech-heavy sedan-in-coupe-clothing is available in two trim levels, the rear-wheel-drive (RWD) Base, and the all-wheel-drive M56x AWD. Though still trailing Mercedes-Benz, BMW, and Audi in this upscale market, Nissan expects its refined Infiniti M series will lure those on a stricter budget away from the more expensive, Euro-dominated luxury sedans to sample a bit of the exotic orient.

A potent 5.6-liter V8 powerplant replaces the 4.5-liter V8 of the previous M generation, adding some 95 extra horses and 81 more lb-ft of torque for a total of 420 hp and 417 lb-ft. The standard seven-speed auto-manual transmission has been tweaked with a transmission hill-holder feature, while the M56x AWD uses a center-mounted, mechanical limited-slip differential to provide full-time AWD traction and security. Mileage is estimated at 15/25 in the RWD Base M56, while the M56x AWD is expected to get 16/25. As with the previous generation of M series sedans, the new M56 uses only premium unleaded gasoline.

Though the 2011 Infiniti M56 tries hard, many owners feel intimidated by what one describes as “technological overkill”; this vehicle includes far too many buttons, controls, gizmos, and gadgets for the average driver to assimilate. The lack of a park-assist feature, as well as the unavailability of a power-closing trunk lid, cheapens this snazzy sedan in the minds of some, while others complain that ride quality deteriorates and the interior gets significantly noisier when encountering rough pavement. For the most part, however, owners are well-pleased with the reworked exterior and interior, while many laud the M56’s generally comfortable yet firm ride characteristics, reasonable mileage figures, and its overall value. Doubtless to Nissan/Infiniti’s delight, many current owners of the M series luxury autos seem to have, indeed, been weaned from their Euro-sedan complacency.

Users ranked 2011 INFINITI M56 against other cars which they drove/owned. Each ranking was based on 9 categories. Here is the summary of top rankings.