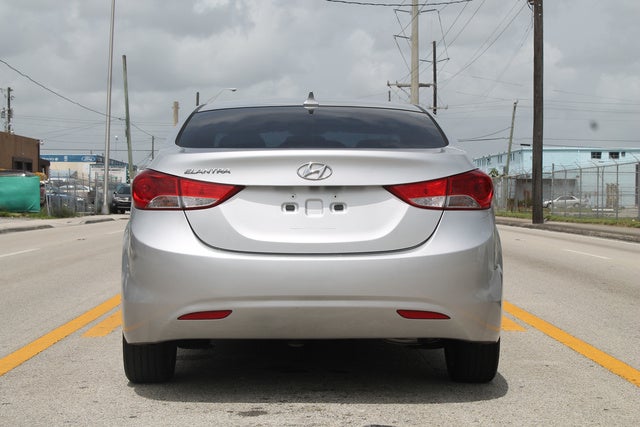 A snazzy new look, a few more horses, even better fuel economy, and one of the best warranties available combine to transform the 2011 Hyundai Elantra from wishy-washy to wow!

Early returns indicate that Hyundai’s redesigned 2011 Elantra can compete with the best of them in a fiercely contested market. More horsepower, some of the best mileage figures in its class, added standard features, and a whole new look have consumers and competitors alike sitting up and taking notice.

Hyundai has changed everything about the 2011 Elantra compact sedan. Uncomfortably aware of image problems with this value-laden four-door, the Korean automaker gave it a new look, a new drivetrain, and a bunch of upgraded standard features, resulting in a car that looks good and cooks under the hood. The old slab-sided shoebox has been replaced with more eye-catching sweeps and swoops and a new grille, as well as a racy new headlight and taillight design. Additionally, a 1.8-liter inline four-cylinder engine (I4) with 10 more horses replaces the old 2.0-liter I4. Finally, two six-speed transmissions, a manual and an auto-manual, with a corresponding improvement in fuel economy, replace the anachronistic four- and five-speed shifters of yore. The strengthened body design and tweaked suspension results in a pleasing ride, while handling remains better-than-average, and the new I4/six-speed combo impresses reviewers with some added highway kick and enviable gas mileage. To top things off, both trims are available with state-mandated partial zero-emissions vehicle (PZEV) status where applicable.

Two trims, the base GLS and the top-shelf Limited, grace the Elantra line for 2011, with the Elantra Blue now deleted from the lineup. While both trims offer the up-powered I4, the GLS is available in either the lower-end stick-shift version or with the upgraded auto-manual configuration. The Limited, on the other hand, comes standard with the auto-manual transmission and a few other perks, like leather, a power sunroof, and turn-signal-integrated mirrors. Featuring loads of standard gadgets, comforts, and techno-goodies, the 2011 Elantra, especially when equipped with the auto-manual transmission, is now roomier, plusher, and more passenger-friendly than ever. Both trims increase the already fairly sizeable trunk space to 14.8 cubic feet, though this acreage is somewhat compromised by a smallish opening and intrusive struts, according to a number of reviewers.

Competition in this crowded market remains the Mazda3, the Ford Fiesta, and the Honda Civic, as well as the pricy Chevy Cruze and Kia’s well-endowed Forte. The consensus among reviewers is that the all-new Elantra could be among the best of a pretty fair lot, a position that Hyundai could only envy from afar in years past. 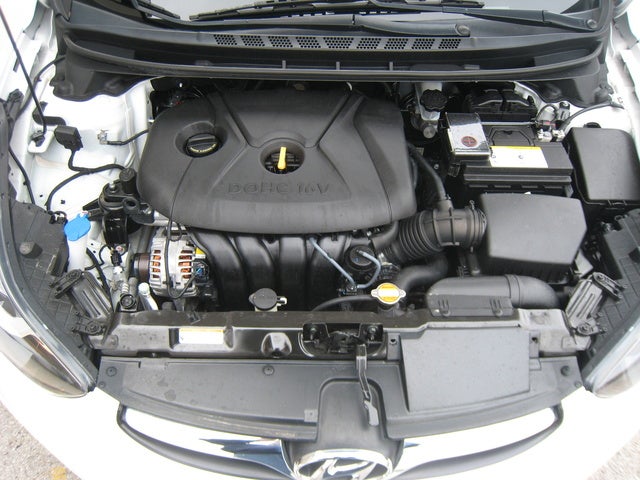 Standard power for all 2011 Elantra trims comes from a 1.8-liter I4 engine, with either a six-speed manual transmission (standard in the GLS) or a six-speed auto-manual (standard in the Limited). With either transmission, expect 148 hp at 6,500 rpm and 131 lb-ft of torque at 4,700 rpm. The auto-manual shifter is available on the GLS, essentially turning it into a mid-level trim, with several significant standard creature comforts added in. Meantime, the PZEV-equipped Elantra trims sacrifice a few horses to meet stricter emissions standards.

Virtually all reviewers find the 2011 Elantra’s new 1.8-liter I4 to be peppy and highway-worthy and the six-speed stick to be smooth and tight. The six-speed auto-manual is considered reasonably silky and alert by virtually all reviewers, though several note that a goodly amount of pedal push is needed for proper downshifting when passing in the automatic mode. Most reviewers, though impressed with the I4’s performance, won’t hesitate to concede that it gets a tad noisy under heavy acceleration, noting that it calms down nicely at cruising speed.

Included in the rework of the Elantra’s 2011 edition are a more rigid body design and some fine-tuning of its suspension. The result is a bit less body lean in tight cornering, more driver confidence on the highway, and an almost sporty feel to the commute. Supplemented by 15-inch steel wheels on the base stick-shift GLS, 16-inch wheels on the auto-manual-equipped GLS, and 17-inch alloy wheels on the flagship Limited, both trims boast a four-wheel independent suspension with MacPherson front struts, front and rear stabilizer bars, and a torsion beam rear suspension.

Reviewers note that steering can be a bit logy, with the electronic power steering providing less feedback than might be desired on the highway. Low-speed maneuvering, according to a few reviewers, also requires a tad more effort than in most sedans in this class. All in all, however, reviewers find handling characteristics to be more than adequate for everyday travel, with some going so far as to describe the Elantra as a kick to drive. This compact sedan’s tweaked suspension, though noted by nearly all reviewers as still a bit firm, nonetheless keeps a lid on all but the most severe bumps and bounces. The 15- and 16-inch tires standard on the GLS trims are, with their higher sidewalls, considered by reviewers to be more forgiving of uneven pavement than the 17-inch rubber standard with the Limited. Braking, meanwhile, is described by nearly all reviewers as strong and true, with no pedal anomalies.

Among the improvements to the redesigned 2011 Elantra is an upsized cabin that provides just a tad more passenger room and cabin storage. The base GLS with manual transmission includes such standard amenities as premium cloth upholstery, remote power door locks, power windows, power-adjustable heated exterior mirrors, and tilt-wheel steering, as well as front and overhead consoles, each with generous storage. Opting for the GLS with six-speed auto-manual transmission gains standard air conditioning, cruise control, and telescoping tilt-wheel steering. Entertainment across the lineup consists of a single-CD player with 172 watts of power and six speakers, along with a USB connection for additional music storage. The Limited, meantime, adds standard 17-inch alloy wheels and a power glass sunroof to this list, as well as standard leather upholstery, multi-level heated front seats, and Bluetooth hands-free communications technology.

Options with the stick shift GLS are limited to the Popular Equipment Package that includes most of the extra standard equipment found on the auto-manual-equipped GLS. The upper-tier GLS and top-shelf Limited, meanwhile, offer the available Preferred Equipment Package with voice-activated DVD navigation, rearview camera, carpeted floor mats, and 360 watts of audio oomph. Further, the auto-manual-equipped GLS is available with 16-inch alloy wheels and Bluetooth technology, with the Limited offering optional push-button start and a heated second-row seat.

Reviewers are generally satisfied that Hyundai has a winner with the 2011 Elantra’s upgraded cabin. Though interior materials remain at a level compatible with its price range, this reworked sedan has improved cabin build quality to the point where even its not-quite-posh materials look good, and enough soft touches are added to significantly mitigate what was once a distinctly low-budget interior. Gauges and controls, meanwhile, are noted by reviewers as easy to read and well-located, with the redesigned center stack garnering added kudos in several reviews. The only sour note mentioned by reviewers seems to be the fact that other than the leather upholstery, standard cabin amenities don’t measure up to the Limited’s alleged high-end image. Though still a tad short on headroom, the Elantra’s expanded cabin now offers 6-footers in the rear seat marginally more legroom than in previous years.

Neither the National Highway Traffic Safety Administration (NHTSA) nor the Insurance Institute for Highway Safety (IIHS) has data on the 2011 Elantra, but the previous generation had garnered respectable scores from both testing sites and, thus far, indications are that things have only gotten better.

Though conceding that the all-new 2011 Elantra is still noisy and still a bit cramped in the second row, owners, by and large, consider its cosmetic makeover a complete success. Many owners wonder, however, why Hyundai didn’t add a bit more torque to complement the new 1.8-liter I4’s boosted horsepower. No complaints, though, about this compact sedan’s laudable gas mileage. Owners also laud the Elantra’s driver and front passenger room, as well as its added rear legroom, but most note that headroom in the rear seat is still less than generous. A few owners are concerned with overall build quality, noting various glitches and gremlins in performance and cabin accoutrements. Most owners are quick to admit, however, that a warranty that’s among the best in the business goes a long way toward finding, fixing, and forgetting these minor disturbances. Overall, owner comments are overwhelmingly positive regarding this re-tooled compact four-door. Handling, looks, plenty of standard features, and a boatload of value all combine to make the 2011 Hyundai Elantra a winner in the minds of most owners.

What's your take on the 2011 Hyundai Elantra?

Users ranked 2011 Hyundai Elantra against other cars which they drove/owned. Each ranking was based on 9 categories. Here is the summary of top rankings.

Have you driven a 2011 Hyundai Elantra?
Rank This Car

2011 Hyundai Elantra won't start and I hear grinding sounds. Plenty of oil, battery is fine, no puddles underneath.

The airbag light in my 2011 Elantra does NOT illuminate at all when starting my car, while all other lights DO. Normally it would turn on for a few seconds and then go off to indicate the system is ...

I have 136K miles on my car and have never had a transmission flush. I am thinking to NOT do one as I have so many miles now and I read that a flush can cause more problems in a high mileage car. ...

My car has had trouble starting since one day when the weather was -40. I had a mechanic come a jump my car and he said everything looked fine, my alternator was fine. The dash in my car will light...