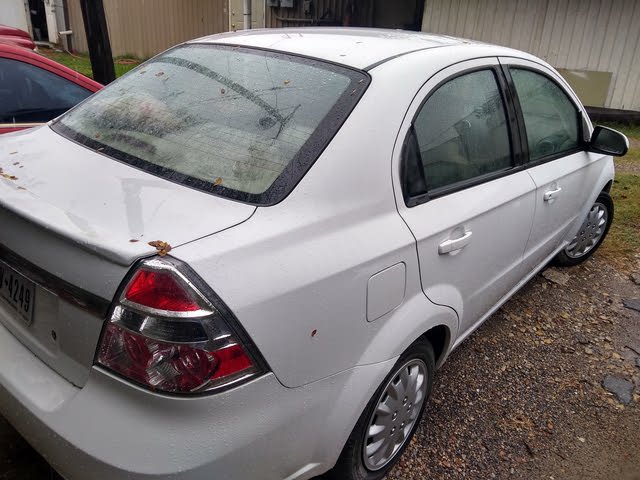 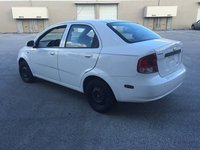 Devoid of style, adequate performance, and class-worthy interior refinements, the 2011 Aveo lags behind nearly all its subcompact rivals.

Priced to sell, the 2011 Chevrolet Aveo will get you from A to B in relative comfort, but with no hope of ever indulging your need for speed or style. All told, the Aveo will always remind you that it’s just a commuter car, and driving it will be about as eventful as eating corn flakes for breakfast.

What do you get when you stick a golden bow tie on the front grille of the Daewoo Kalos? The answer is the 2011 Chevy Aveo. Produced by GM Daewoo, the Korean-conceived subcompact has many names and sells in many countries. However, none of its myriad nameplates has ever risen to prominence despite minor facelifts and engine tweaks.

For 2012 – a year later than initially planned – GM will take the model in a radically new direction. The second-generation Aveo is expected to shake up the small-car arena with agile design and European-inspired driving dynamics. For this model year, however, Chevrolet showrooms offer the same Aveo holdovers from 2010, including the sedan and the Aveo5 hatchback.

The same 1.6-liter, four-cylinder engine remains the sole source of power for all Aveos. GM has not reformed the trims either, giving both variants the familiar LS, LT, and LT2 trim grades. With the exception of in-cabin air filtration in the LTs, an upgraded OnStar system, and one extra hue in the exterior color palette, the 2011 Chevy Aveo stands identical to last year’s model.

The word Kalos, which gives name to the Aveo’s Korean twin, is Greek for “beautiful.” Yet one finds little beauty – Hellenic or otherwise – in the Aveo sedan. Even the term "styling" overstates its dull, utilitarian appearance, which can be easily mistaken for that of a car designed in the early nineties. Thanks to the 2005 spruce-up, the Aveo5 hatchback is much easier on the eye, but still far from transcendent. The car merely fits in with other hatchbacks on the road, but stops short of turning heads.

Residing under the hoods of all 2011 Aveos is a 1.6-liter, four-cylinder ECOTEC engine – the very same four-banger that powers last year’s models. The engine puts out 108 hp and 105 lb-ft of torque. Those horses supply the Aveo with enough pull to get its occupants from here to there without falling behind other cars on the road. Aside from that, this decidedly conventional inline four offers no surprises.

Even after last year’s 2-hp increase, most drivers will detect no difference in either off-the-line or midrange performance. Just as before, freeway merging will not call for any real planning, unless the on ramp is unusually short and your Aveo is packed to the brim with people and cargo. The higher LT trims offer an optional four-speed automatic transmission with the so-called Hold Control mode, claiming to boost traction and power delivery on slippery and uneven roadways. Otherwise, a five-speed manual transmission is standard across all trims.

Those who expect the manual gearbox to get more juice out of the Aveo’s engine will be disappointed. To increase fuel economy, GM has made the transmission's ratios way too spread out, particularly when shifting into higher gears. This hampers engine responsiveness and further neuters overall performance.

On the upside, Aveo buyers opting for the manual will be rewarded with EPA estimated 27/35 mpg fuel economy – decent, but not outstanding by today’s small-car standards. The Aveo does worse with an automatic, yielding 25/34 mpg.

To further boost fuel economy, the manual transmission features a shift light that signals when to switch gears. Drivers who don’t find it a nuisance will make good use of the feature by modulating their shifts for optimal engine efficiency.

There is little praise to be offered in honor of the Aveo’s road manners. This little Chevy will take on most journeys with confidence, but not as eagerly as many of its class rivals.

Once under way, it gains poise in steering and ride dynamics. There is no available stability control system, and yet the car feels sturdy and duly responsive. During hard braking, the 2011 Aveo remains inline. It will bob and weave when thrown into turns, but not much more than other small cars in this segment. The tried-and-true MacPherson struts up front and ABS brakes on the LTs get the job done right.

Long trips in the 2011 Aveo will feel neither laborious nor exhausting, thanks to ample headroom and high seating positions for driver and passengers. The Aveo also keeps most road and wind noise out of the cabin and holds engine vibration to a minimum. Note, however, that this four-cylinder will get unpleasantly raucous when revved up – another reminder that the 2011 Chevy Aveo offers friendly A-to-B transport and doesn’t like to be pushed beyond the call of duty.

Inside the 2011 Aveo there are no big surprises. The quality of materials is roughly on par with other subcompacts, but hardly world-class. All front and rear seats offer plenty of support, though the front headrests seem a bit too large and awkwardly shaped. There is even a height-adjustment lever for drivers in all trims. Cloth is standard, and two-tone leatherette seats are an option in the LT2.

The Aveo’s instrument cluster, featuring four analog dials and a digital driver information display in the center, mimics some of Chevy’s European siblings. Still, the panel can’t seem to escape a distinctly Korean look. Before the 2005 facelift, the Aveo's dash looked shabbier, and the gauges were less readable. And yet thrifty as it was, the layout seemed to have some sense of charm. Fast-forward to the 2011, and the Aveo's interior, while clearly more refined than its predecessor's, lacks in originality completely.

Despite the 60/40 split-folding rear seats, the 2011 Aveo sedan's trunk is shameful, offering only 12.4 cubic feet of space. Thus potential buyers in need of extra cargo capacity will definitely want to opt for the Aveo5. The five-door hatchback – also with a 60/40 split-folding rear bench – yields a much more generous 37.2 cubic feet of room for cargo.

Options? The base Aveo LS has literally none – no CD player, no trip computer, nothing power. Also, it doesn't include floormats or air conditioning, but somehow an auxiliary audio input jack and cloth reclining bucket seats with height-adjustable head restraints and a driver's seat armrest are standard in all trims. The LT improves the situation, adding standard air conditioning, a 6-speaker premium audio system with CD/MP3 player, and front and rear carpeted floormats. It also makes available a small array of add-ons standard in the LT2 trim, including a power and driver convenience package, XM radio with three trial months, cruise control, a rear spoiler, and a power moonroof.

The 2011 Chevrolet Aveo’s overall safety is a mixed bag. In this regard the Aveo5 is a better choice yet again. In U.S. government crash tests, the five-door hatch earns five stars for front passenger head-on impact protection, one more than the sedan. The Insurance Institute for Highway Safety (IIHS) rated the Aveo as merely Average in frontal-offset collision tests.

All Aveos earned five stars in frontal driver crash tests, according to government testing. However, the IIHS gave the Aveo its second-lowest Marginal grade for side-impact protection. Every Aveo, regardless of trim level, comes with front-seat side airbags, but no curtain airbags – a safety feature made standard for many other 2011 subcompacts.

The 2011 Chevy Aveo is by no means a deathtrap. However, beyond getting passing grades, the Aveo’s safety is like all else in life: You get what you pay for.

The 2011 Chevy Aveo is not a consensus builder. The smallest subcompact in GM’s current lineup is also one of the cheapest cars sold in America. As such, the Aveo’s pricetag remains its most praised facet. For some, however, an attractive price sticker is not enough to make up for many of the model’s refinement, quality, and performance deficits.

Everyone is in accord when it comes to ample headroom and visibility. Even taller-than-average drivers find themselves at home behind the wheel of the Aveo. However, it just as frequently gets complaints about scarce in-cabin storage, a feeble air-conditioning unit, and poor fuel economy.

What's your take on the 2011 Chevrolet Aveo?

Papa2100 Same thing happened with my 2011 aveo. It was a bad expansion valve and compressor. Replaced both and ac workd perfect now.

GuruMRX89 How do I figure out where my 2011 Chevy aveo was manufactured?? Parts store needs to know either Mexico or US?? HELP PLEASE I'M SO CONFUSED

Have you driven a 2011 Chevrolet Aveo?
Rank This Car

My Chevrolet LS Optra 2011 Problems When Going Up Hills

My Chevrolet LS Optra 2011 car has problems when going up hills and does not pick up speed. What could be the possible problems? Thanks for your help in advance.. :)

15 views with 1 answer (last answer about a week ago)

Rpm Is High While Speed 0?

2011 Aveo Crank But No Start After Overheating What Could It Be?

my 2011 aveo overheated and now it cranks but does not start what can it be?

When I Turn On AC, The Engine Dies?

When I turn on AC, the engine dies? Problem started after replacing heater hose.