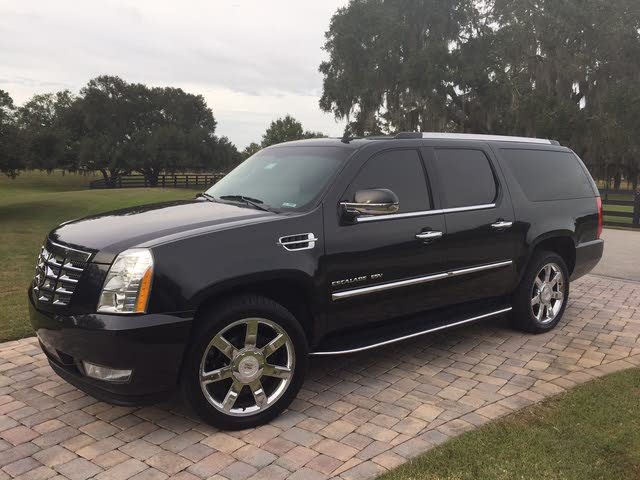 Average user score
3.8 ⁄ 5 stars
Based on 15 reviews
Total Satisfaction by Selloum79 — great reliable truck, good looking design. I must say that the best part is the front grill and the headlights. The seats are very comfortable and the leather is so fancy with a great finishing. Being... Read more
Review by reginald — Smooth ride,love the easy exit setting..and its very spacious. Read more
Review by kenny111169 — Is a great beautiful and strongest model of kind of a truck. Read more

The 2011 Cadillac Escalade ESV presents the luxury full-size SUV at its longest. While maintaining the swank, swagger and status of the standard Escalade, the ESV adds an extra 14 inches to the wheelbase, maximizing seating and cargo room. With its built-in cachet, powerful V8, and chrome bling to spare, the ESV is richly appointed inside and out. In fact, most reviews can only find fault with the slightly cramped and unwieldy third row, poor fuel economy and high rate of theft—factors that won’t necessarily detract from the Escalade ESV’s appeal.

The 2011 ESV has been tweaked only a little from last year’s model. The standard navigation system now runs on an SD-card, rather than a DVD; the 6-CD changer has been downsized to a single-disc player; new paint colors have been added, and OnStar and Navigation radio have been enhanced. All four trims (Base, Luxury, Premium and Platinum) come with standard rear-wheel drive or available all-wheel drive. The 6.2-liter Vortec V8 with VVT and Active Fuel Management (designed to save fuel by running on only four cylinders when all eight are not necessary) generates 403 hp at 5,700 rpm and 417 lb-ft of torque at 4,300 rpm. Although criticized for its roar during acceleration, the engine manages to accelerate the ESV’s almost 6,000 pounds from 0-60 mph in 6.5 seconds. Its weight, naturally, impacts the fuel economy of the ESV (able to run on premium gasoline or E85), with EPA estimates of 13 mpg city/18 highway for all-wheel-drive versions and 14 mpg city/18 highway with rear-wheel drive. The Hydra-Matic six-speed automatic transmission, with electronically controlled shifting, includes a manual mode and a tow/haul mode, for when the SUV is used for more than show (maximum trailer capacities are 7,700 pounds with AWD and 7,927 pounds with RWD). A rear locking differential also helps to control the vehicle over uncertain road conditions.

As can be expected from a vehicle with an MSRP of more than $65,000, even the Base ESV comes nicely appointed. Outside, the Base features 18-inch, seven-spoke aluminum wheels, power door locks and remote keyless entry. Power heated driver and passenger side mirrors include integrated turn signals and perimeter lighting provided by mirror-mounted puddle lamps. The Base front headlamps are Xenon high-intensity discharge (HID) with standard halogen foglamps. Integrated running boards (with available power-retractable running boards) are a key feature for climbing in and out of this high-rise of a vehicle, and the rear power liftgate can be opened and closed via the remote.

Once inside, the Base ESV continues the theme of standard luxury, although some reviews have noted some cheaper-looking plastic in the interior. The Base offers standard tri-zone climate control, with settings for the driver, front passenger, and rear seating, and the adaptive remote start (with two transmitters) can not only remote-start the car, but heat or cool it for comfort before entering. Heated and cooled front leather seats provide 14-way power adjustment and memory settings for two drivers. In addition, drivers can tailor the ergonomics behind the wheel with power-adjustable pedals and a power tilt (not telescoping) steering wheel with integrated controls for audio and cruise, OnStar and hands-free calling. The second row of seating offers standard bucket seats (with heated leather) or total seating can be increased from seven to eight with an available second-row folding bench (with a 60/40 split). The third-row bench—the least comfortable seating option by all accounts—splits 50/50 and can be folded, tumbled forward or totally removed. The third row seems to be one of the few weak links in the ESV’s armor. The third row does not fold completely flat, necessitating its removal to maximize cargo space—a task called “cumbersome” by reviewers. And an expansive cargo space is one of the perks of the Escalade ESV. Even with all three rows of seating intact, the ESV provides 45.8 cubic feet of storage behind the third row. With the third row removed, the storage expands to 90 cubic feet behind the second row and 137.4 cubic feet once the second row is folded and the third completely removed.

The standard ultrasonic rear park assist (giving audible alerts of objects behind the vehicle) and a rear-view camera (which automatically engages when the vehicle is shifted into reverse) are welcome features given its size. Other standard technology includes a Universal Home Remote, Bluetooth for hands-free cell phone use, a one-year OnStar Directions and Connections Plan, a three-month XM Satellite Radio plan and a Bose 5.1 surround sound system with 10 speakers (adjusted for the additional size of the ESV) and independent rear-seat audio controls. The Driver Information Center provides data about tire pressure, fuel economy and a trip odometer, as well as programming some of the vehicle’s features, such as remote door locking and unlocking, seat-position memory settings, and outside mirror settings. An 8-inch navigation screen provides touchscreen or voice recognition navigation with turn-by-turn instructions and directions.

Safety features include antilock brakes, StabiliTrak with rollover mitigation and an electronic stability control system, traction control, and six airbags. The 2010 ESV rated five (out of five) stars from the National Highway Transportation Safety Administration for front crashes, but both RWD and AWD versions fared less well with rollover scores (only three stars).

If the Base Escalade ESV is not enough, the car can be upgraded to the Luxury trim. At this level, IntelliBeam headlamps are added, switching on the high beams automatically and toggling back to low beams when oncoming headlights or taillights are detected. A heated steering wheel, power tilt and slide sunroof, and a side blind-zone alert (which uses radar to detect objects or vehicles entering a blind spot in the adjacent lanes of traffic, giving a visual warning signal in the matching side-view mirror) become standard features at the Luxury trim level as well. The ESV's ride is smoothed out further with Magnetic Ride Control, which adjusts constantly to changing road conditions under the upgraded 22-inch, seven-spoke chromed aluminum wheels.

The Premium trim takes a step further up the luxury ladder, adding power retractable running boards and a rear-seat entertainment system (including an in-dash DVD, two roof-mounted 8-inch diagonal screens and four wireless headphones). The Platinum trim represents the top of the Escalade ESV line with distinct front fascia and grille design and LED headlamps that Cadillac touts as not only energy efficient and long-lasting, but jewel-like. The wheels have been upgraded to a trim-specific, 22-inch chromed aluminum multispoke design, and the interior now sports an exclusive color scheme with the front and second-row seats covered in Tehama leather and embroidered with the Cadillac insignia. Leather also wraps the instrument panel and trim, detailed with real olive ash and burled walnut wood inlays. Additional DVD screens have been added to the rear of the front headrests, and, just to push it completely over the top, the highest trim level provides heated and cooled cupholders.

Potential buyers should note that a Highway Loss Data Institute study (published in August 2010) ranked the 2007-2009 Cadillac Escalade as one of the most-stolen vehicles. Given its long list of standard features, smooth ride for a big vehicle, status-oriented styling, and the ability to carry massive quantities of cargo (and up to eight people), it is no wonder the Escalade is so coveted. The downsides of the 2011 Cadillac Escalade ESV (uncomfortable and cumbersome third row and poor fuel economy) will probably not be enough to deter consumers (or thieves) from this status symbol, beloved by seekers of the bold and bling-iful.

What's your take on the 2011 Cadillac Escalade ESV?

Dormobile_8149 I am a retired military, and finally have the opportunity to be a Cadillac Escalade Esv owner a gift to myself, and came across a good deal couldn't pass on the opportunity. I will be picking it up today thanks Usaa Bank. I made a wise choice instead of a Jaguar. I test drove it., it felt so luxurious, handled awesome, and a good size for the family to travel comfortably. I call it my grown man's toy.

Have you driven a 2011 Cadillac Escalade ESV?
Rank This Car

How Can I Write A Review

How can I write a review for a dealer

I have a 2011 Cadillac Escalade and it has a little vibration to it when your at a light or just parked. It's not constant and the dealership told me it was normal, but I just wanted a second opin...

Can you assist with financing for a private seller?