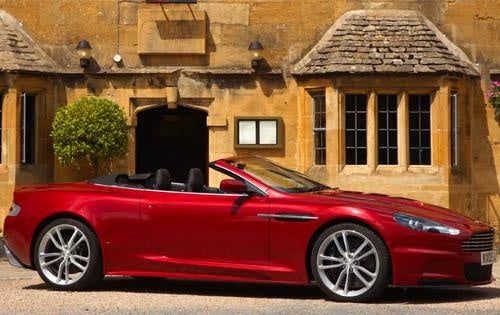 The Aston Martin DBS was originally positioned as an all-new car, a replacement for the Vanquish that bowed out in 2006. No one was buying it, and the automotive world recognized it for what it was – a hopped-up version of the DB9. Small changes peppered around the entire architecture added up to some big differences, making the DB9 nearly obsolete or at least definitively second rate. More small changes come to the DBS for 2011, including swanky glass switchgear and some software upgrades, but otherwise you’ll find the same asphalt-eating monster that’s been prowling the roads the last five years.

Software changes come in the form of tweaks to the tire-pressure monitoring system as well as the Bluetooth microphone, the latter addressing complaints heard from owners. While the DBS and DB9 share the same 6.0-liter V12 and generally the same structure, the small tweaks in the DBS make a big difference. Carbon fiber is found throughout the DBS, and the V12 carries 40 extra horsepower here. The chassis has been tuned as well as the steering. Again, small changes, but they all add up to a 60-mph sprint that happens a half-second faster than in the DB9.
Of course, you can pay more than $100,000 extra for a DBS versus a DB9 depending on options, so that can be an expensive half-second. But with a starting price that already skirts $270,000, what’s another hundred grand or so?

The convertible version – dubbed the Volante – is even more dear at $282,000, but it does come with a power soft top and hard tonneau cover. Neither version wants for features, with standard equipment like an adaptive suspension, carbon-ceramic brakes, leather and alcantara and a Bang & Olufsen audio system. The expected luxury features are all here as well, with hard-drive navigation, xenon headlights, parking sensors and Bluetooth.

The DBS' major caveat, barring its exorbitant price, is the automatic transmission. While manual shift is possible, it’s not the best setup on the market and not up to the DBS’ pricetag. The 6-speed manual is a far superior choice, with a light clutch pedal and direct shift engagement that has a decidedly mechanical feel.

All the usual driver aids are present, from traction and stability control to a limited-slip differential, all of which intervene only when necessary and with the most graceful of interruptions. The DBS allows you to sow your wild oats without ending up faceplanting in the field.

For a true Grand Touring machine that can actually perform when you feel a bit of the hooligan creeping up your spine, you can’t do much better than the DBS. Of course, for the price you’d be disappointed if it didn’t. The SLS-AMG or the Ferrari California will deliver just as well, but not any better. For the money, you simply need to choose which car you’d rather be seen driving.

Have you driven a 2011 Aston Martin DBS?
Rank This Car