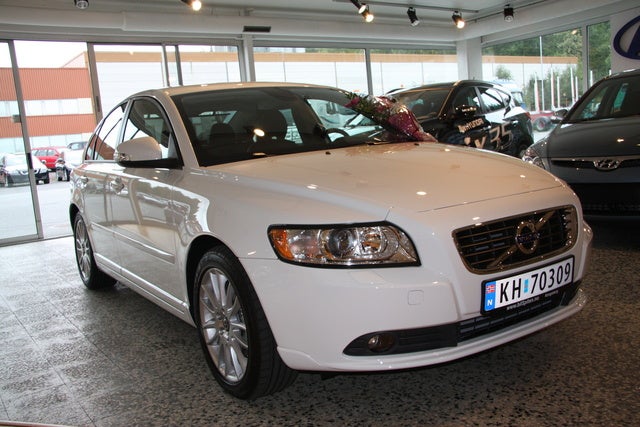 Volvo continues to assault the Euro-style sedan market with its 2010 S40, a well-built five-passenger automobile with decent features that nonetheless seems a bit overpriced. Offered in two trims, the 2.4i and T5 R-Design, the S40 is somewhat unique with its available pair of inline five-cylinder (I5) engines. The popular five-speed automatic transmission is reprised for the 2010 S40 T5 R-Design with front-wheel drive, while a slick six-speed manual is now available for the all-wheel-drive (AWD) T5 R-Design; the FWD base 2.4i, meanwhile, regains a standard five-speed manual. The S40 received a significant overhaul in 2008, but for the 2010 model year, Volvo claims, besides something old and something new transmission-wise, significant changes from ‘09 include only improved gas mileage.

Owners of the 2009 Volvo S40 question the value of such a pricy midsize sedan, as well as its small luggage capacity. The 2.4-liter I5 is noted by some owners as more than a bit underwhelming, though its once-tepid gas mileage has, according to Volvo, been improved. One additional glitch mentioned by a few owners is a tricky clutch mechanism with the five-speed manual transmission. Looks, however, as well as comfort, handling characteristics, and general build quality, not to mention Volvo’s legendary safety features, have owners praising the S40 as a more-than-worthy family automobile.

So the red triangle hazard light came on in my car is started to slightly rattle and also on the dash it said to either slow down or down shift??

100 views with 1 answer (last answer about a year ago)

Can anyone tell me the name of this pipe in my volvo s40 engine. The pipe has split and makes a blown/hissing noise when i accelerate..so i can order a new one many thanks everyone (not a great pi...

Car Started Ran For Awhile Then All The Warning Lights Came On Including Th...

What could this be

I Have Very Bad Knocking Problems Comes And Go. But Car Runs Good 80000 Tho...