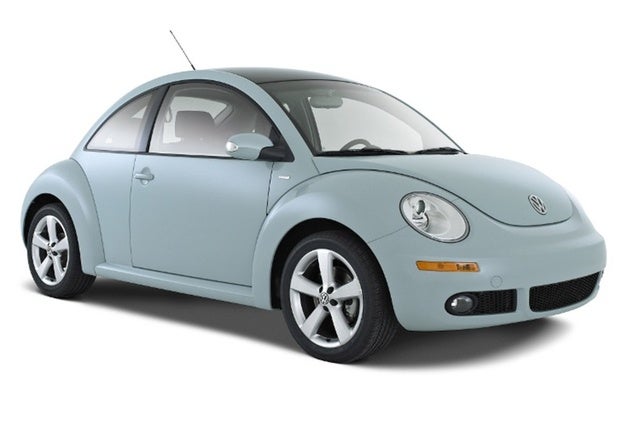 The retro-hip cool factor is off the charts with the 2010 Volkswagen Beetle, which also delivers some clever comfort features and a firm grip on the road.

The 2010 Beetle's driving mechanics are outdated, its fuel efficiency doesn’t match some rivals', and interior space is limited by its unique design.

There's no doubt the 2010 Volkswagen Beetle, like its predecessors, is a wildly unique and fun car that may just make you fall in love every time you get a look at it. But if you want a more practical compact car, you should likely look elsewhere.

If you wear vintage clothes, listen to vinyl, or indulge in any other form of retro chic, the 2010 Volkswagen Beetle will certainly appeal to you. You may even have a 1998-2009 New Beetle sitting in your driveway already.

Yes, the New Beetle has been around for 13 years now, and word on the street is this cute compact is headed for a redesign in 2011, so this may be your last chance to buy a brand-new New Bug. The Beetle comes as a two-door coupe or convertible. Beetles sold in California and California-emissions states meet the Partial Zero Emissions Vehicle (PZEV) standards, which seems only right given the flower-power history of the Bug. They all come with a 150-hp inline five-cylinder engine.

Since its uniquely rounded and supremely fun exterior design is what separates the Beetle from everything else on the road, it’s no surprise that this design has remained the same since the New Beetle’s introduction in 1998, and it certainly doesn’t change for 2010. The only new features this year for the Beetle are some new color options and a standard boot cover for the convertible. 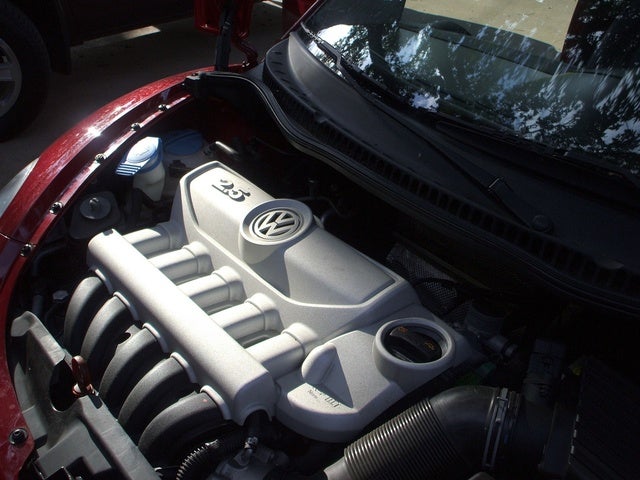 Critics are content with the power offered by the Beetle’s I5, and some go so far as to call it peppy. Reviews are just average for the five-speed manual transmission, though some feel it limits the car’s power. The automatic tranny (available for $1,100 in the coupe) is smooth and timely.

Keeping the exterior design the same since 1998 makes perfect sense, but Volkswagen has sold the Beetle a bit short when it comes to upgrading its performance features through the years. Its driving mechanics are the same ones that debuted 13 years ago, and while they were state of the art then, they are outdated now.

Despite the lack of upgrades, the Beetle still handles as well as most compact economy cars. The only problem with that is the Beetle’s $18,500 starting price pushes it beyond the compact economy class, yet some testers still describe the Beetle’s handling as responsive and pleasing for a premium small car. The bottom line is that if you like the Beetle’s design, you will likely be satisfied with its ride. If you don’t care about aesthetics and want as much performance for your dollar as you can find, you might want to consider another vehicle.

The I5’s 170 lb-ft of torque delivers plenty of power at low speeds. The Beetle also has enough juice to merge or pass at high speeds, and it feels solid and sure-footed on the highway, although its shape can lead to some wandering in high winds. Road, engine, and wind noise are average for a car this size.

Critics agree that the Beetle delivers a smooth ride, even over rougher surfaces. This ride stems from the body’s air-tight craftsmanship and the suspension - MacPherson struts, coil springs, telescopic shock absorbers, and a 23mm integrated stabilizer bar in the front, and an independent torsion beam axle, coil springs, telescopic gas-pressurized shock absorbers, and an 18mm stabilizer bar in the rear.

The power-assisted, dual-circuit, three-channel antilock brakes also receive universal praise from testers for delivering repeated sure stops. And the rack-and-pinion power-assisted steering is light and responsive.

The Beetle’s interior is well crafted with high-quality materials and some nice touches (like the standard dash-mounted flower vase). But that retro-chic bubble shape does present a problem by seriously compromising both passenger and cargo space. But if you’re a smaller person who travels light and doesn’t need to haul a car full of family or friends, don’t worry about it.

Standard features include CFC-free air conditioning, cruise control, heated front seats, an alarm system, remote entry, a padded leather steering wheel with tilt and telescoping adjustments, power locks and windows, heated power mirrors with integrated turn signals, heated windshield washer nozzle, V-Tex leatherette seat trim, two power outlets, and a six-speaker stereo with CD/MP3 capability, auxiliary input jack, and Sirius satellite radio. The convertible top doesn’t raise or lower with a one-touch button, but it is a fairly simple operation. There are not many available options, but you can add a power sunroof for $1,000 or a 6-CD changer mounted in the cargo area for $99.

The front seats are comfortable and offer more headroom than most drivers or passengers would ever need. The pump-handle height adjusters for the front seats are simple to use, but the hand wheels to adjust the backrest can be tiresome. The bubble design makes trouble for the backseat by seriously limiting the headroom. Two adults will be cramped in the rear for any extended period of time.

The cargo area is also compromised by the Bug’s bubbles, with just 12 cubic feet available behind the rear seat for the coupe (only 5 cubic feet in the convertible) and 27.1 cubic feet with the rear seat folded (the convertible’s rear seats don’t fold). But there are some convenient storage nooks with two front cupholders and one rear cupholder, front door storage nets, a compartment inside the front center armrest, a removable luggage compartment, and an optional collapsible trunk cargo organizer for $90.

If you bought the Beetle, chances are good you aren’t complaining about it. In fact, contrary to the critics, most owners praise their Beetle’s driving dynamics, saying it feels lively, reliable, and sturdy on the road. And of course they love the car’s look and the looks they get while driving it.

There are a few complaints about the lack of storage space and a high-end stereo option, but these feel like minor criticisms compared to the love that owners hold for their Beetles.

What's your take on the 2010 Volkswagen Beetle?

Have you driven a 2010 Volkswagen Beetle?
Rank This Car

Key In The Ignition Will Not Turn

When the key in placed in the ignition to start the car, the key will not turn. The steering wheel is locked and the gear shifter is stuck in Park..

Driver Window Will Not Go Down 2010 Beattle

My driver door lock was repaired by dealer and now I cannot get the window to go up or down. Which means by convertible is stuck and will not go back up. I tried over riding it which did not work. ...

I just purchased a 2010 Beetle a month ago. The car is adorable. I've always wanted to drive a Beetle but now I hate I!!! I sit in my smoldering car in 90 degree heat UNABLE to turn the key in the ign...

Been out in my VW new beetle 2010 cabriolet all fine Went to go out again and nothing, complete electrical failure, no lights, no horn nothing, any ideas?