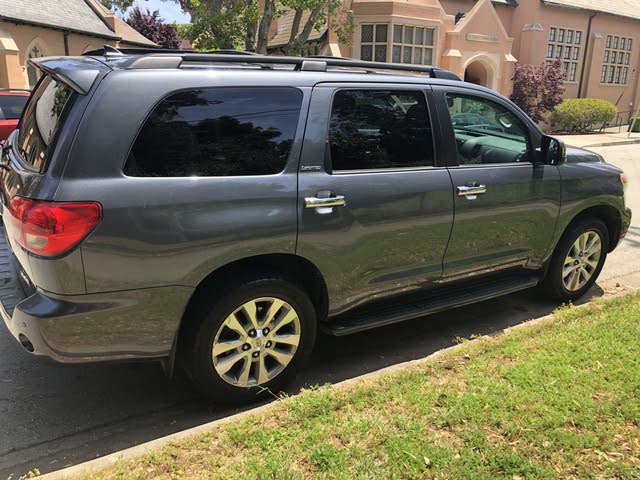 The 2010 Sequoia, at least in its higher-end trims, doesn’t come cheap, while iffy cabin materials and below-grade technology keep this full-size SUV from dominating the market.

If smaller is not an option, the 2010 Toyota Sequoia has what it takes to seat eight comfortably, haul a lot of trailer, and go where few have gone before. Then, too, there’s that Toyota reliability. Those pricey higher-end trims, however, as well as lagging technological systems and some disappointing cabin materials, may prompt a few prospective buyers to look elsewhere.

After essentially taking 2009 off, the Toyota Sequoia full-size SUV is back for 2010. It now boasts three trim levels, the base SR5, midlevel Limited, and top-of-the-line Platinum, as well as a new base V8 engine, front-seat knee airbags, an upgraded standard Bluetooth hands-free communications system, and the realignment (to the point of elimination) of a number of confounding options packages. All three trim levels are offered with either rear-wheel drive (RWD) or four-wheel drive (4WD), and all feature 121 cubic feet of cargo space with the rear seats folded.

Upsized in 2008, the Sequoia is a four-door, seven- to eight-passenger brute of a vehicle in a market whose better days are behind it, gas prices and EPA regulations, not to mention public perception, being what they are. However, for those who just can’t resist the “bigger-is-better” mantra, the 2010 Sequoia is now roomier, more powerful, more flexible, and better-behaved than ever.

Though still not as ride- or cargo-friendly as some of its competition, there seems to be a consensus among owners and professional reviewers that the 2010 Sequoia is marginally more versatile and potent than many of its ilk. Since the 2010 Sequoia’s main competition includes the likes of Chevy’s Tahoe, GMC’s Yukon, Ford’s Expedition, and Nissan’s Armada, it has no need to be ashamed. 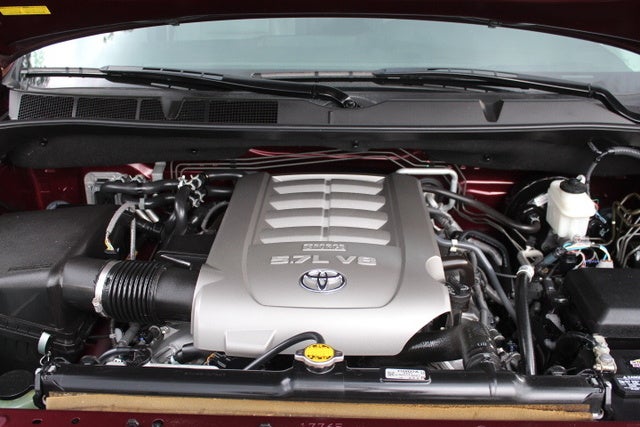 Optional for the SR5 and standard with both the Limited and Platinum trims is a prodigious 5.7-liter V8 that, with its accompanying six-speed auto-manual transmission, puts out 381 hp at 5,600 rpm and 401 lb-ft of torque at 3,600 rpm. This combo allows the 2010 Sequoia to tow up to 10,000 pounds in its RWD configuration, while getting an EPA-estimated 14/19. Us usual, the 4WD trims will get a somewhat lower towing capacity and marginally poorer mileage. Additionally, the 5.7-liter V8 is available in an E85-capable Flex Fuel version with no degradation of its capabilities.

Professional reviewers find the 4.6-liter V8 and five-speed semi-automatic to be adequate for performance, though just a tad underpowering. The 5.7-liter/six-speed combination, on the other hand, displays more-than-adequate acceleration, though a few reviewers complain of a reticence on the part of the six-speed to downshift when necessary for passing and merging.

With a four-wheel independent suspension, front and rear double-wishbone construction, and front and rear stabilizer bars, the 2010 Toyota Sequoia uses its considerable size and weight to smooth out most rough road surfaces. The Platinum trim level also offers a three-mode load-leveling suspension system that improves ride quality, but its “Sport” mode is the only one that does much to alleviate an unsettling bounce on wavy pavement and an uncomfortable lean in tight corners.

The base SR5 Sequoia is equipped with 18-inch alloy wheels, while the Limited and Platinum trims come with 20-inch alloys. Most professional reviewers find little ride and handling difference between the two wheel sizes. The Sequoia’s standard all-terrain tires, though a bit noisy on the highway, are proven effective on slick roads and muddy, rutted paths. Speaking of which, the on-demand 4WD Sequoia trims, with manual hi-lo gear selection, a center locking differential, auto-locking hubs, and standard 3.9 axle ratio make the 2010 Sequoia a formidable off-road vehicle.

Nearly all professional reviewers find the 2010 Sequoia to be a capable vehicle on the highway as well as downtown, where its relatively tight turning radius keeps it civilized in traffic, and at least manageable when parking. The front and rear parking sensor system and rear-view backup camera, standard on the Limited and Platinum trims respectively, are of immeasurable help in maneuvering.

All 2010 Toyota Sequoia trims are well-equipped with standard appearance, comfort, and convenience features. Unfortunately, both reviewers and many owners find some of the technology, such as the voice-activated DVD navigation system and climate-control buttons and switches, not as up-to-date or user-friendly as they'd like, though most of the dashboard gauges are large and easily read. Some interior materials have been described by reviewers as downright “chintzy.”

The Limited trim adds a power liftgate, leather upholstery, multi-level heated front seats, a power-adjustable front passenger seat, a universal remote garage-door opener, and a 440-watt JBL premium audio system with 6-CD changer and 14 speakers, including a subwoofer. Interestingly, the Sequoia Limited trim is the only one to offer any sort of substantial options, such as the DVD navigation system, rear-seat DVD entertainment, and second-row captain’s chairs.

Many owners of the 2010 Toyota Sequoia have issues with its less-than-stellar interior materials, as well as its gas mileage, often-disappointing ride quality, and a few sub-par technological features. Also, many owners find the 2010 Sequoia difficult to park because of its size, despite the front and rear parking sensors and rear-view camera system offered with the Limited and Platinum trims.

Meanwhile, the Sequoia's exterior styling, seat comfort, V8 engine performance, and room to stretch out, as well as better-than-average braking ability and Toyota’s commitment to reliability, have drawn praise. The standard JBL premium audio system offered with the Limited and Platinum trim levels also begets the admiration of owners, as do the vehicle's high stance and flexible seating configurations.

What's your take on the 2010 Toyota Sequoia?

Alan I was looking for a Toyota 4Runner and I found this Sequoia, it was in Platinum trim, with second-row Captain's chairs and every conceivable option! The three young teenagers I needed the extra room I couldn't cram them into a small third row seat, so when I saw the power 3rd row seats, so huge captains chairs in the second row that were also heated, the cockpit for the driver, was heated in air-conditioned seats in a dashboard that felt like the lexus lx470, I just caved in! It looks like a 4Runner on steroids and on the highway is smooth and quiet. A tad bigger than I would have liked, but since they're not bringing back the 2006 Land Cruiser, this seemed like a pretty good option. Mpg could be better, but every mile is a pleasure. When it drops 20 inches of heavy snow I'll be laughing my butt off. I told myself the first thing I would do is install an automatic starter, but of course it already comes with one!

Have you driven a 2010 Toyota Sequoia?
Rank This Car

Has Anyone Installed A Grille Guard On A 2010 Toyota Sequoia?

I tried to install a Steelcraft grille guard on a 2010 Toyota Sequoia. Steelcraft, the instructions, and the boxes all 'say' that it fits 2008-2010 Sequoias. During installation, however, there is ...

ive taken down every singel armada that tried with but never with a lexus.