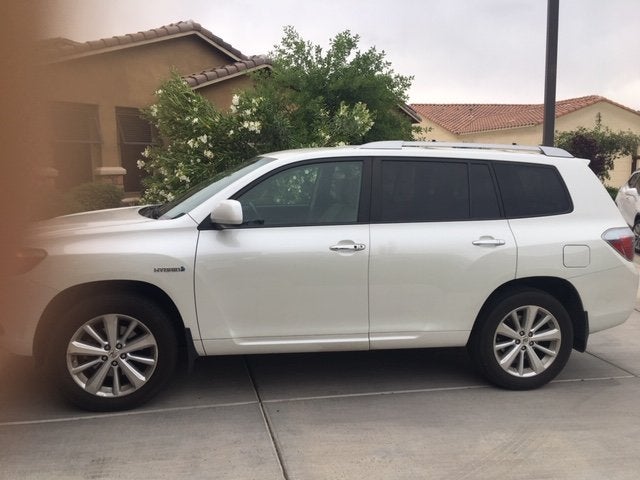 Plenty of passenger and cargo space, including third-row seating in the Limited trim, lots of cabin storage, a peppy-yet-economical hybrid powertrain, and an ergonomically sound cabin design are all hallmarks of the 2010 Toyota Highlander Hybrid.

No split-folding feature for the third-row seat, a hefty pricetag, and an overly delicate all-wheel-drive system keep the 2010 Highlander Hybrid mired in the middle of its market segment.

Though unaffected by Toyota’s recent safety recalls and production halts, the 2010 Highlander Hybrid is obviously going to suffer through association. Too bad, because this midsize crossover offers eco-friendly as well as family-friendly performance, standard features, and versatility.

For those with the means to go green, the 2010 Toyota Highlander Hybrid ought to be worth a look. This five-door, five- to seven-passenger midsize crossover is available in two trims, the Base and the almost-luxurious Limited, and both are equipped with full-time all-wheel drive (AWD) and roomy, family-friendly cabins as well as 94 cubic feet of cargo room with the rear seats folded down. Additionally, third-row-equipped Highlander Limited trims come with Toyota’s standard “Center Stow” second-row seat, allowing the bench seat to be configured for three passengers with a removable center section that stows in the front console and, when removed, allows easier third-row accessibility.

Though unaffected by Toyota’s most recent gas-pedal woes, the pricey 2010 Highlander Hybrid does have one significant drawback in that its high base price will very rarely be recouped through any sort of long-term fuel savings. Though assuredly efficient, this hybrid’s claim to fame rests with its smaller environmental impact, as opposed to any significant cash savings, variable-valve timing (VVT), cylinder deactivation, and regular unleaded gas capability notwithstanding.

Confidently treading the thin line between performance and efficiency, however, the Highlander Hybrid delivers decently nimble handling, a smooth, comfortable ride, and AWD traction, while helping to restore Toyota’s reputation for family-friendly, safe, and generally reliable vehicles. The 2010 Highlander Hybrid is virtually unchanged from 2009, and its major competition remains Ford’s Flex and Escape Hybrids, and the larger but not overly capacious Chevy Tahoe and GMC Yukon Hybrids. 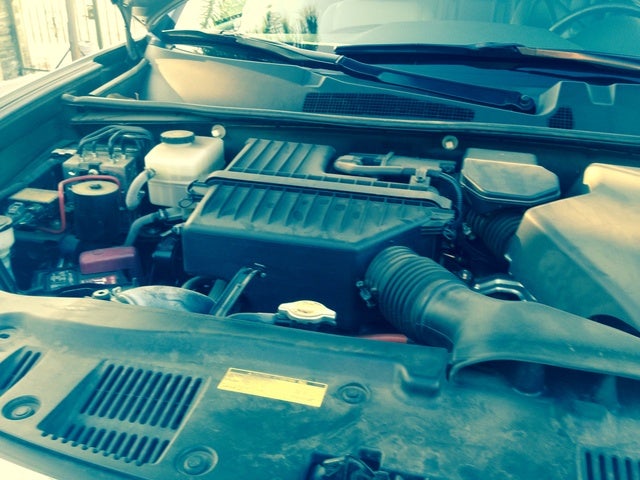 At the heart of the 2010 Highlander Hybrid’s drivetrain are a 3.3-liter VVT V6 engine and a pair of battery-fed electric motors that combine to provide 270 hp at 5,600 rpm and 212 lb-ft of torque at 3,600 rpm, in addition to true two-mode hybrid performance. A continuously variable transmission (CVT) manages these ponies, while regenerative braking and the gas-powered V6 provide juice to the nickel-metal hydride battery. The Highlander Hybrid is capable of low-speed operation on electric power alone, with a 123-kilowatt electric motor dedicated to the front wheels and a 50-kilowatt rear electric motor that’s designed to provide some extra oomph to the rear wheels when additional traction and acceleration are needed. In traditional fashion, the two-mode hybrid system automatically shuts down the V6 at a stop and re-starts it on acceleration.

One review has the 2010 Highlander Hybrid galloping from 0-60 in 7.5 seconds, which is pretty impressive for a crossover of any breed, and especially so for a hybrid. Additionally, this sprightly hybrid is capable of hauling 3,500 pounds of trailer when properly equipped, and earns its stripes with an EPA-estimated 27/25 mpg efficiency rating. Variable valve timing and deceleration fuel cut-off on the V6 obviously boost the Highlander Hybrid’s efficiency properties.

Virtually all reviewers consider the 2010 Highlander Hybrid almost as powerful as its gas-powered sibling, with the CVT featuring hill-start assist and descent control that responds alertly to driving demands. Many professional reviewers do note, however, a distracting tendency for the hybrid system to surge and lag occasionally in highway driving.

With a four-wheel independent suspension, front and rear stabilizer bars, and MacPherson struts all around, the 2010 Toyota Highlander Hybrid’s ride comfort and handling are noted as nearly sedan-like by most reviewers. Indeed more than one review claims this hybrid is at the top of its class for driving comfort and maneuverability. Some reviews, however, mention a pronounced lean in hard cornering, as well as a bit of lag in steering response, though the latter is common to those vehicles that, like the Highlander Hybrid, use electric power steering as opposed to a hydraulic system. With the Base Hybrid rolling on 17-inch alloy wheels and the Limited riding 19-inch alloys, bumps and road imperfections are, according to most reviews, minimized through this hybrid’s significant heft.

Despite its weight and size, the Highlander Hybrid, with standard four-wheel disc brakes, provides sure, smooth braking ability with little pedal play and confidence-inspiring stopping power. Overall, reviewers rate this hybrid a joy to drive, with its center-mounted, mechanical, limited-slip differential providing seamless AWD performance. It ought to be stressed, however, that the Hybrid’s AWD system is not designed for any sort of serious off-road operation.

Though a few reviewers complain of some less-than-opulent interior trim materials, the consensus is that the Highlander Hybrid offers adequate head- and legroom in its first and second rows, as well as numerous cabin cubbies, pockets, nooks, and crannies for small-item storage. Seating is described as comfortable and supportive, though the Limited’s third row can be a challenge for adults over long distances. Ergonomically, large, easy-to-read gauges and well-placed controls are the norm in the Hybrid, though most reviewers claim the available navigation system does disturb efficient operation of many audio controls.

Obviously, fuel efficiency ranks highest on the list of owner kudos for the 2009/2010 Highlander Hybrid. This does not mean, however, that the Hybrid is flawless in this regard, with more than a few owners complaining that they get considerably less mileage than advertised. Less-than-roomy third-row seating in the Limited as well as the often-confounding navigation/audio intermixing also contribute to owner frustration. Finally, an excessive whine from the hybrid system is noted by owners as problematic, as are some side and rear visibility issues caused by extra wide roof pillars and rear-seat headrests, a few cheap-looking cabin trim pieces, lack of cargo space behind the Limited’s third row, and, of course, the Highlander Hybrid’s high-end pricetag.

Positives, however, abound with this well-conceived crossover, with competent handling and ride comfort, ordinarily conservative fuel numbers, flexible second-row seating configurations, and spacious passenger accommodations topping the list of owner superlatives. Except for the DVD navigation set-up, the Highlander Hybrid’s plethora of standard creature comforts, as well as its spiffy styling, both exterior and interior, and its green-tinged image also gain plaudits from owners.

What's your take on the 2010 Toyota Highlander Hybrid?

lancewade Good car, but it has "timing belt" which costs probably $1000 to replace very 60K to 90K. The 2011 model and beyond features a "timing chain" which should last the life of the vehicle.

Users ranked 2010 Toyota Highlander Hybrid against other cars which they drove/owned. Each ranking was based on 9 categories. Here is the summary of top rankings.

Have you driven a 2010 Toyota Highlander Hybrid?
Rank This Car

I have a 2010 Toyota Highlander hybrid and the hybrid battery died now how much will a used one cost me? And also is it a good idea? Or better of get a new car? Thank you!!

Check engine light comes on when in high altitude (12000 ft above sea level ). Is this normal?

I am so scared I made a bad call. Spent alot of money yesterday and I have no idea about Hybrids. My husband doesnt either. We have two small kids who are always with me. I have read a lot of bad re...

which fuse controls the break lights

Can You Tow 1000 Lbs. With A Toyota Highlander Hybrid?

Need to know if a tow kit can be applied and what is recommended for towing with a hybrid.