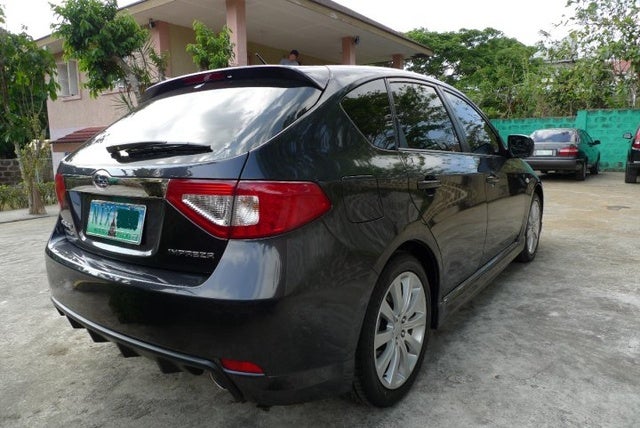 Decent performance and handling characteristics, numerous styles and configurations to choose from, affordability, and of course, standard all-wheel drive across the lineup all make the 2010 Subaru Impreza a pretty fair value.

Noisy engines, tepid design, and some low-grade interior materials, as well as a somewhat dated and inept four-speed automatic transmission, keep the 2010 Impreza mired in mediocrity.

Though a competent commuter and certainly an attractive value, the 2010 Subaru Impreza tries to impress too many disparate tastes. This results, naturally, in a trim lineup that does little or nothing to overwhelm the senses. Seriously, does anyone want to drive an Impreza just for the sheer joy of it?

With its 2010 Impreza, Subaru has taken the shotgun approach to niche marketing. Five basic trim levels, in two configurations, as well as a number of sub-trims, mean there’s an Impreza out there for all those who can’t decide between a competent commuter vehicle and a semi-accomplished roadster. The four essential Impreza trims include the base 2.5i, WRX, 2.5GT, and the Outback Sport. The 2.5i, 2.5GT, and WRX trims are available in both five-passenger sedan and five-door hatchback versions, while the Outback Sport is offered only as a hatchback. Sub-trims in the Impreza lineup include Premium editions of the 2.5i and WRX trims. Competition for the Impreza includes the Honda Civic, Hyundai Elantra, MAZDA3, and Volkswagen Golf, all worth a look when deciding on a compact car.

A few tweaks to the Impreza’s looks, including a redesigned grille, and some adjustments to options packages, including a new Special Edition Package for the 2.5i trims, differentiate the 2010 Impreza from the 2009 version. Though many reviewers are unimpressed with Subaru’s latest styling incarnation, most concede that this car is purchased for reasons of economy and practicality, as opposed to exotic looks or neck-snapping acceleration.

An additional bonus offered by the 2010 Impreza lineup is its reliable and effective Symmetrical All-Wheel Drive, whereby power is sent to each wheel separately, allowing the wheels that grip to take over from the wheels that slip. Full-time AWD has been a Subaru tradition since the inception of the brand. 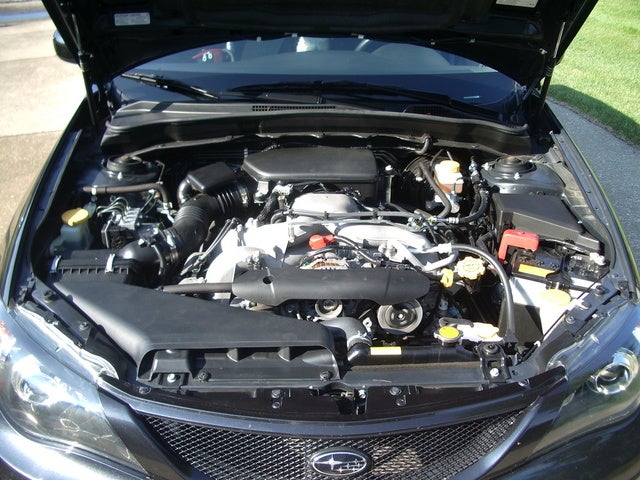 A single 2.5-liter flat four-cylinder gas-powered boxer engine is offered in all 2010 Subaru Imprezas, with the higher-end trims packing turbocharged powerplants with a corresponding increase in horsepower. The base 2.5-liter, horizontally opposed flat four powers the 2.5i, 2.5i Premium, and Outback Sport trims, and when managed by either the five-speed manual transmission (with hill-start assist) or available four-speed automatic, it puts out 170 hp and 170 lb-ft of torque. Mileage for the 170-hp, 2.5-liter without turbo is estimated at 20/27 mpg with the manual transmission, and 20/26 with the four-speed automatic. Most professional reviewers consider the 2.5i to have adequate power and responsive shifting with the five-speed manual gearbox.

The Impreza 2.5GT packs a turbocharged version of the 2.5-liter flat four that, with its standard four-speed automatic, grinds out 224 hp and 226 lb-ft of torque to the tune of 19/24. Reviewers are appreciative of the turbo power shown by the 2.5-liter engine, but consider the four-speed automatic outmoded and lacking responsive shifting. Impreza WRX trims also sport a turbocharged 2.5-liter flat four, but with a standard five-speed manual transmission. This DOHC, 16-valve mighty-mite is capable of 265 hp and 244 lb-ft of torque, with fuel economy estimated at 18/25.

With a four-wheel independent suspension, a front stabilizer bar, MacPherson front struts, double wishbone rear end, and 16-inch steel wheels, the 2010 Subaru Impreza 2.5i and Outback Sport trims offer a relatively smooth and comfortable ride, abetted by their traction-laden full-time AWD configuration. Though equipped with both front and rear stabilizer bars and 17-inch wheels, the 2.5GT continues to disappoint reviewers with timid handling characteristics that are considered a little too plush for an alleged sports car. The 2010 Impreza WRX trims, on the other hand, with their stiffer suspension systems, deliver alert handling as well as a comfortable highway cruise.

The standard braking systems in the Impreza lineup are noted by professional reviewers as more than adequate for the job. Steering is described by reviewers as somewhat relaxed - fine for lower trim levels, but disappointingly remote in the higher-end, supposedly sport-oriented trims. The standard center-mounted viscous, limited-slip differential AWD system used in the 2010 Impreza lineup provides impressive pavement-sticking characteristics for all sorts of road and weather conditions. 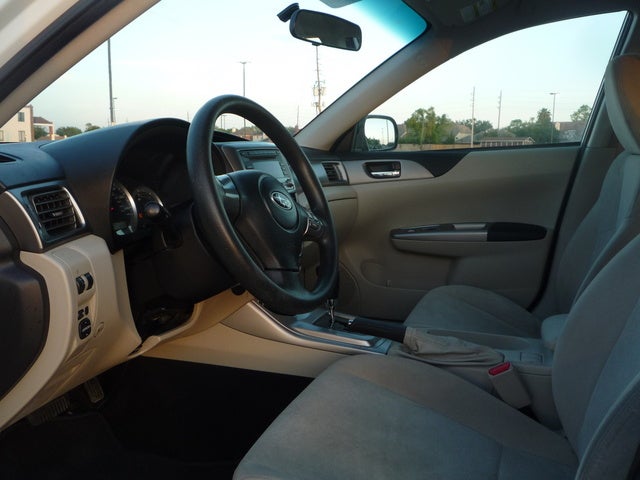 In a redesigned cabin considered by many professional reviewers to be quite roomy, though still a bit tawdry vis-à-vis interior trim materials, the 2010 Impreza carries a fairly impressive list of standard comfort and convenience features. Though not the most noise-free interior environment compared to the competition, both the sedan and hatchback trims mirror each other’s amenities throughout the 2010 Impreza lineup. Sedan versions offer a mere 11.3 cubic feet of trunk space, while hatchbacks feature a more impressive 19 cubic feet of luggage area and 44 cubic feet of cargo space with the rear seats folded.

For 2010 the base Impreza 2.5i offers standard power windows, remote door locks, and mirrors, tilt-wheel steering, cruise control, air conditioning, front and rear floor mats, and an 80-watt, single-CD audio system with four speakers that reads impressively but, according to virtually all reviewers, lacks sound quality. Appearance, comfort, and convenience options include satellite radio, upgraded speakers, STi leather upholstery, a new-for-2010 2.5i Special Edition Package, and a rear spoiler. The 2.5i Premium trims feature cloth sport front seats, leather-trimmed steering wheel and shift knob, and ten speakers, while also offering such options as a power moonroof, touch-screen DVD navigation, remote start, and heated outside mirrors. A rear spoiler, optional with the 2.5i sedan and hatchback trims, is standard for the Outback Sport, as are such items as heated premium-cloth front seats, heated exterior mirrors, and a 6-CD changer with 10 speakers. Options for the Outback Sport mirror those of the 2.5i Premium trims.

The Impreza WRX adds standard telescoping tilt-wheel steering and premium cloth upholstery, with such added options as the SPT catback exhaust system and universal remote garage door opener. WRX Premium trims throw a standard power sunroof, wheel-mounted audio and cruise controls, and a 6-CD changer into the mix, with such options as leather upholstery and upgraded exterior trim available. The Impreza 2.5GT trims, meanwhile, add standard heated front seats and heated outside mirrors, as well as an available upgraded stereo and exhaust system. The power sunroof is also optional with the 2.5GT.

Gauges and controls in the 2010 Impreza are well-placed and easy to read, according to most professional reviewers. However, many reviewers claim that cabin storage is at a premium, and that those pesky hard plastic surfaces mar an otherwise comfortable and inviting interior layout. 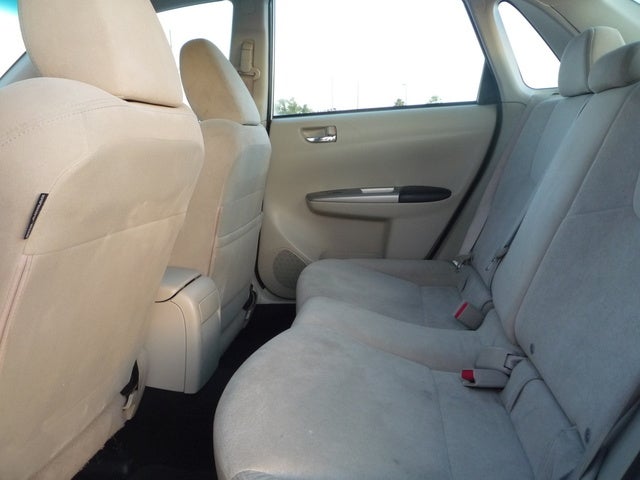 The 2010 Subaru Impreza continues a tradition of safety vouchsafed by its being tagged a “Top Safety Pick” in 2009 by the Insurance Institute for Highway Safety (IIHS). The National Highway Traffic Safety Administration (NHTSA) additionally awards five stars for the Impreza’s driver and passenger front and side crash protection, four stars for rear side impact protection, and four stars, as well, for rollover safety.

Owners of the 2009/2010 Subaru Impreza praise, above all, the full-time AWD capabilities inherent in the Subaru brand. Beyond that, reliability, handling, and cabin roominess all contribute to the praiseworthiness of this compact lineup. There are, however, a few things owners would like to see improved. Tinted glass, better audio systems, a more defined headlight design, and a few more horses in the non-turbo 2.5-liter flat-four engine are among the concerns mentioned by many Impreza owners. Better cabin insulation has been urged by more than a few owners to dampen raucous engine, road, and wind noise, while both interior and exterior styling seem to be hit-or-miss with virtually all.

Value and safety, always at or near the top of an owner’s priority list, are considered to be well in hand with the 2009/2010 Impreza, while the 2.5i’s practical economy, the Outback Sport’s multi-configurable versatility, and the 2.5GT’s hesitant approach to sporty performance targets an almost limitless variety of owner tastes. Additionally, an appealing price has persuaded considerably more than a few drivers to choose the Subaru Impreza for their transportation needs.

What's your take on the 2010 Subaru Impreza?

Christian Although pleased with handling/4wd had really annoying issues with this car. Electrical (wipers not working in the rain...could not find the reason) and jurking transmission at 89k. Lack of power out of the gates almost got me killed...

Scott My 2010 Impreza, automatic, hatch, AWD system is very good in slippery conditions. The power is very good from start and around town. The power for passing (45mph+) is merely adequate. The MPG has been in the high 20s around town (I am an easy going driver) and low to mid 30s on the highway.

How To Wire In Active Speaker

How do I connect an active speaker from like a bookshelf stereo system to my car,( active speakers have built in amps and just need a source of audio, how do I provide that from the signal already ...

What kind of gas?

My car keys were stolen, and I would like to know if it's possible to change my car lock and reprogram? I don't want the old ones to work. Do I go to a car dealership or lock smith? What terminology...

Question: My 2010 Subaru Impreza experienced engine failure which was attributed to broken connecting rod bearing. The car is covered under an extended warranty. The dealership is slated to replac...

Engine Swapping A 02 Outback To 2010 Impreza

i have a 2002 Subaru LL Bean outback that im looking at swapping the engine into a 2010 Subaru Impreza 2.5i what should i do to make it work