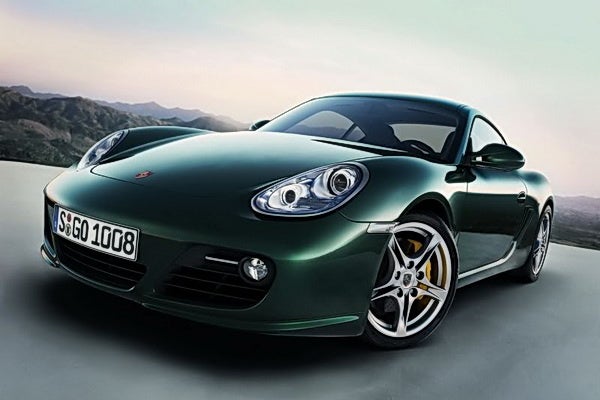 It would’ve been easy to slap a C moniker on a hardtop version of the Boxster and call it a day, but Porsche knew better. Given the non-conventional design history of the Cayman – it started as a convertible and added a hardtop, instead of the other way around – the base for this Boxster coupe creates a naming nightmare. After all, “Boxster” is a portmanteau of roadster and boxer, for the flat-six boxer engine that can be found smack in the middle of the layout. So while the Cayman is really little more than a coupe version of the Boxster, it gets its own name.

But far be it from Porsche to leave it at that – something needs to distinguish this model from its soft-top siblings, after all. Thankfully for us, that distinction comes in the form of power. While the Cayman utilizes the same 2.9- and 3.4-liter flat-six “boxer” engines as the Boxster, here they both make 10 hp more for a total of 265 in the Cayman Base and 320 in the Cayman S. More importantly, they peak later in the rev range – 800 rpm later, in fact, finding their sweet spot at 7,200 rpm. Torque is increased as well in these direct-injected engines, with 221 and 273 lb-ft of torque showing up at 4,400 and 4,750 rpm, respectively.

It’s that torque that really defines the driving characteristics of the Cayman, with its low center of gravity and fully neutral steering and handling. It’s meaty and pleasantly present throughout the middle, just where all the best driving happens. You’re not going to rip the asphalt from the road beneath you as you blast away from a light – although a Cayman S is still capable of a 4.9-second sprint to 60 – but ample, usable, almost calming power is available where most of your driving will occur. Because of these qualities, the Cayman really speaks to the traditional purpose of a European sports car. Speed through subtlety rather than brutality offers a different outlook than an American muscle car with mounds of vicious torque daring you to go faster, faster – all the while taunting you for being a sissy. The Cayman instead gently suggests you go a little faster, push it a little harder, because it knows you can handle it and you’ll have fun doing it. It’s the kind of tender reinforcement and refined character that make you want to propose rather than buy her a shot.

Sure, there are lots of electronic enhancements and driver aids, but these are extensions of the inherent philosophy of the car, rather than Johnny-Come-Lately add-ons, and they do add so much. Porsche Stability Management is standard, and optional Porsche Active Suspension Management only complements the ride. The big choice is between the smooth and precise six-speed manual transmission and the even smoother and more precise PDK double-clutch seven-speed automated manual. There is something to be said for dropping the left foot and grabbing a handful of gear, but the PDK offers quicker shifts and better economy. Personally, I’d prefer the more traditional six-speed, but the PDK is fun in a whole other way. I can’t say I’d be disappointed with either option. You’ll get 19/27 mpg with the six-speed in the Cayman Base, and 19/26 in the Cayman S, but choosing the PDK will bump both those figures up to 20/29 – an advantage that will certainly change a few minds.

Because of the Cayman’s mid-engine layout, it offers trunks front and back. The rear hatch and window open up to offer an impressive 9.2 cubic feet of space, while the front adds 4.9 itself. Try finding that in a comparable sports car, not to mention in its big brother, the 911.

Truly, the Boxster and Cayman have both caught a lot of negative press for being entry-level segments in the Porsche roster, for being “Porsche Light.” This is simply unfair. The Cayman is Porsche, down to its very center, where that wonderful flat-six engine lies. It’s more fun to drive than a 911, more balanced, and even more useful in real-world applications. Perhaps people aren’t pleased with their Porsche unless it more closely skirts the $100,000 mark, but for me I’ll take the Cayman.

What's your take on the 2010 Porsche Cayman?

Guru9ZMZ66 It's a fricken Porsche

Have you driven a 2010 Porsche Cayman?
Rank This Car

The Seller Has Not Answered My Questions

How Do You Stop Bait And Switch

How do you report "bait and switch?" It is apparently common and acceptable practice in my area for dealerships and independent car lots to advertise a car that they do not have in stock. Some wou...