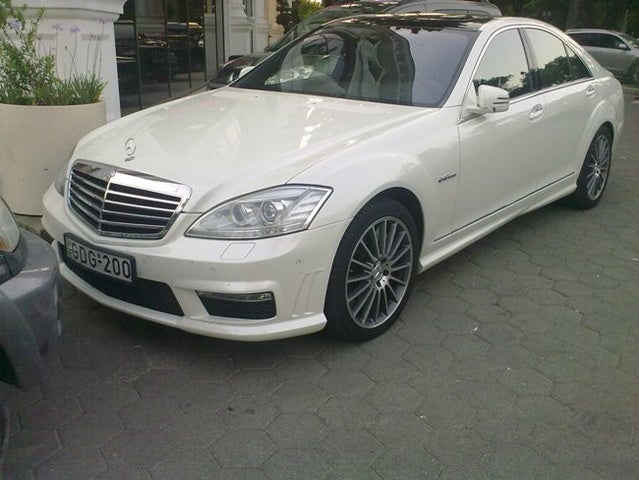 Mercedes-Benz takes a big step toward fuel efficiency by adding the new S400 Hybrid trim to its lineup of S-Class luxury sedans for 2010. The S400 Hybrid, which holds the distinction as the automaker's first series-production passenger car with a hybrid gas/electric powerplant, achieves fuel economy numbers of up to 29 mpg. In addition, Mercedes restyles its flagship luxury sedan for 2010, giving the S-Class minor exterior updates as well as new interior and upgraded safety features.

In a nod toward innovation, Mercedes uses the latest lithium-ion battery technology for the S400 Hybrid, rather than the nickel-metal-hydride battery commonly found in other hybrids. In addition, Mercedes mounts the battery in the engine compartment rather than in the trunk, so it doesn't intrude on the S-Class's expansive cargo capacity. A regenerative braking system, which recovers kinetic energy from the brakes as they're applied, keeps the battery charged.

The S400 Hybrid joins the S550, S600, and S63 AMG in the S-Class lineup for 2010. All trims display a number of new exterior components, including reshaped front bumpers, a repositioned grille with a more pronounced arrow shape, redesigned bi-xenon headlights with LED indicators at the edges, and new taillights, also with LEDs. Chrome strips beneath the cool air intakes help dress up the front end, while at the back Mercedes integrated the exhaust pipes into the rear bumper. In addition, contoured, more aerodynamic exterior lines help reduce wind noise, ensuring a quieter cabin.

Inside, Mercedes-Benz has updated the S-Class's multifunction steering wheel, which has a sportier feel, thanks to a flatter airbag module. In addition, Mercedes wraps the steering wheel in premium leather, which comes standard throughout the line. The updated COMAND system, which enables drivers to control the car's interior technology features, includes GPS navigation with a 40-gigabyte hard drive, a 6-CD/DVD player, a Music Register with room for approximately 1,000 MP3 tracks, and a 6.5-inch color display screen for 2010. In addition, the COMAND system can now display phone book information, which works in conjunction with standard Bluetooth. Owners can add HD digital radio and Zagat restaurant ratings to the system as options.

Updated safety features for the 2010 S-Class include the Pre-Safe brake system, which now links to a proximity regulating radar. As a result, the system becomes more adept at protecting the driver and front passenger in rear-end collisions by tightening seat belts and adjusting the seats, among other actions. New optional safety features for the 2010 S-Class include an Attention Assist driver drowsiness monitor and an optional Adaptive Highbeam Assist, which recognizes oncoming vehicles or vehicles ahead and adjusts the headlights to provide optimal illumination without blinding other drivers. In addition, a Lane Keeping Assist system can recognize lane markings and warn drivers by vibrating the steering wheel if it detects the sedan leaving its lane unintentionally.

Other than the S400 Hybrid, the S-Class sedans retain their powerplants from the previous year. A 5.5-liter, 382-hp V8 engine, which generates 391 lb-ft of torque, powers the rear-wheel-drive S550 sedan, which owners can equip with the optional 4MATIC AWD system. The S600 sedan's powerful 510-hp, 5.5-liter V12 powerplant has two compact turbochargers, which provide impressive low-end torque (612 lb-ft), driving the sedan from 0 to 60 in just 5.4 seconds. At the top of the line, the S63 AMG keeps its AMG-built 6.3-liter V8 engine, which develops 512 hp and 465 lb-ft of torque at 5,200 rpm, pushing the sedan from 0 to 60 in 4.5 seconds. For the S550, the V8 engine links to a seven-speed automatic transmission with Touch Shift, which enables drivers to shift manually, while in the S600 the big V12 mates to a five-speed transmission designed to handle the engine's torque output. In the S63 AMG, the engine mates to an AMG Speedshift Plus seven-speed automatic transmission with F1-inspired shift paddles located on the steering wheel.

What's your take on the 2010 Mercedes-Benz S-Class?

Users ranked 2010 Mercedes-Benz S-Class against other cars which they drove/owned. Each ranking was based on 9 categories. Here is the summary of top rankings.

Have you driven a 2010 Mercedes-Benz S-Class?
Rank This Car

I posted my 2010 S550 car for sale add on CarGurus and would like to add the CARFAX to it.

My S550 Will Not Start,changed Battery,instrument Panel And Radio Comes On ...

replaced battery in my 2010 s550 ,instrument panel lights and radio works, car still will not start ,engine will not turn over

my 2010 s550 would not start ,changed the battery and still will not start

Can I Get Help With The Next Stage Of Trying To Purchase My Car?

I found "THE" My Dream Car, I've already been Pre Qualified By WESTLAKE but I don't know what to do because I can't get it to move forward or I'm not sure if it's taking the car since I've been tryi...