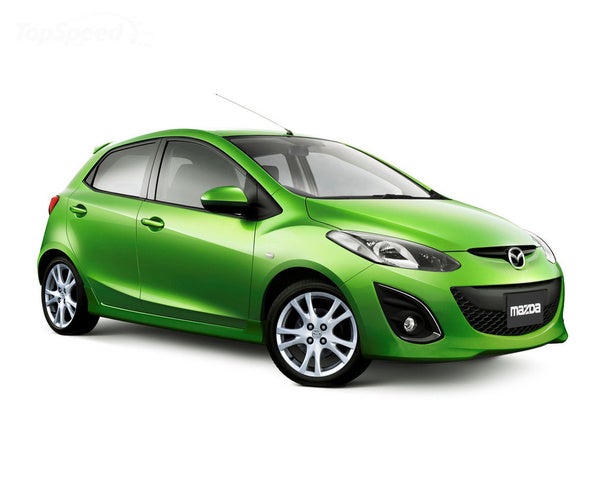 The 2010 Mazda MAZDA2 is the best little subcompact that we didn’t get… yet. Taking the racer’s mantra that dropping weight will benefit all aspects of performance, the MAZDA2 had headed in the opposite direction of its competitors for years, staying trim and fit while everyone around it got fat. While considered an entry-level car, this four-door hatchback offers quality, economy and performance on the Ford B3 platform, the same that has produced the Fiesta and Ka.

Two trims are available, Sport and Touring, avoiding any “base” negativity. Both are powered by a dual overhead cam inline four-cylinder (I4) engine that offers 100 hp and 98 lb-ft of torque. This seems underpowered considering the ridiculous horsepower figures we’ve become accustomed to, and in truth the MAZDA2 is a bit sluggish, even around town. Its light weight and crisp handling are fun, however - you just need to keep the revs high or you’ll find yourself bogging down.

The five-speed manual transmission bests the four-speed automatic in economy, with 29/35 mpg versus 27/33, but the automatic is the hands-down winner with regard to performance. The manual is simply vague and sloppy through the gears, and the clutch offers little feedback with regard to engagement.

Still, the MAZDA2 has won awards around the world, having been named Car of the Year in over 20 countries, and is fresh off a redesign from 2008 – the year it won World Car of the Year - despite not having been seen on our shores yet. In fact, aside from its lack of power and disappointing manual transmission, the MAZDA2 does almost everything else right. The strut-front and twist-axle rear suspension is taut without being harsh, making the vehicle a capable highway machine, if a bit pogo-ish over rougher roads. The interior has a modern if slightly cheap design – meaning hard plastics of attractive grain and acceptable quality – and room is even abundant. Surprising for a subcompact, the MAZDA2 could actually fit four medium-size adults front and back, or two large adults with kids.

As Americans continue to warm up to the idea that cars don’t have to be tanks, vehicles like the MAZDA2 show us how fun a small car can be. More importantly, it proves that subcompact doesn’t always mean crappy. With a bit of attention to the interior materials and a small performance shot into the engine, the MAZDA2 could make some serious waves on this side of the ocean.

Have you driven a 2010 Mazda MAZDA2?
Rank This Car

Does This Model Have A Smart Alternator?