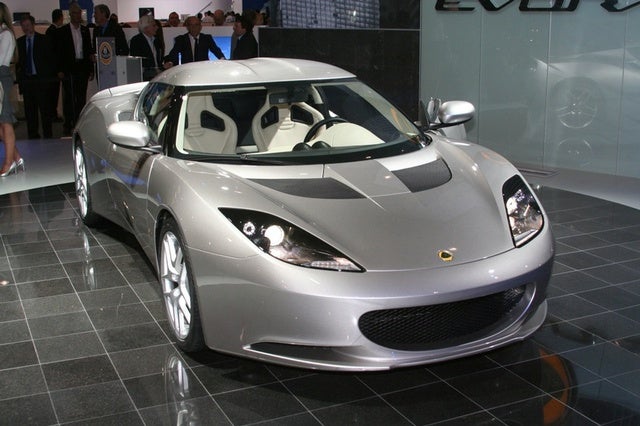 A more livable Lotus? Whodathunkit? The 2010 Lotus Evora debuted at the 2008 LA Auto Show with something not usually seen in a Lotus - a back seat.

Well, it’s almost a back seat. Built in the usual Lotus mid-engine/rear-wheel-drive configuration, the Evora is a 2+2 coupe, with room enough in back to fit a toddler or two. With 2,000 units making their way to U.S. shores this year, buyers can also decide to switch out the almost symbolic rear seat for a luggage rack, an option that many are expected to check, if only to stay semi-true to the Lotus heritage. Still, the Evora is larger. It has a wheelbase 11 inches longer than the Elise's, not to mention being almost 2 feet longer overall. This means two things. First, the Evora has the same Lotus handling with a bit of added stability; you’re going to have fun, but you won’t get the same post-traumatic stress disorder that often results from the go-kart-like twitchiness of the Elise. Second, there’s actually some room inside.

What is this? A Lotus you could drive every day? Say it ain’t so! Lotus made a lot of concessions in order to make that claim. We’re talking leather upholstery and dash, Alpine audio with Bluetooth and a digital-media interface, a rearview camera… even a garage door opener.

Still, the Evora didn’t have to sacrifice performance. Lotus claims its structural rigidity bests the Elise's by two and a half times, with a .33 drag coefficient and sustained lateral acceleration of 1.3 g. Not only that, they’ve been throwing around the contention that the Evora is the only car in the world that will best 5 seconds in the 0-60 jaunt, can top 160 mph, and will get better than 30 mpg. Sounds pretty livable after all.

All that power comes from an unlikely source - a 3.5-liter V6 normally found in a Toyota Camry. What’s worse, it’s not even the direct-injection version Toyota offers, as that engine has yet to be set up to run in anything other than longitudinal applications. Still, the Toyota powerplant is good for 276 hp here, as well as 258 lb-ft of torque, more than enough to motivate the barely 3,000-pound Evora.

Lotus also borrowed a transmission from Toyota, a six-speed manual originally found in a diesel powertrain, and while the company kept the gear ratios for the standard offering, it will also offer an optional sport version, with unique gears for third through sixth. The clutch is all Lotus, however, and the linkage has been reworked for a crisper feel.

Your typical Lotus is a lot like the wrong woman, making you think you’re better, stronger, quicker than you are, all while begging you for more, More, MORE! The Evora is just as fun, but more refined - something to be savored, not consumed - with none of the deceptive viciousness of its smaller brethren who may at any moment break loose and toss you in a ditch, leaving you wondering what the hell just happened. Rather, the Evora seems built for those of us who realize there’s more to life than living weekend to weekend, a semi-practical solution to an impractical addiction.

Have you driven a 2010 Lotus Evora?
Rank This Car