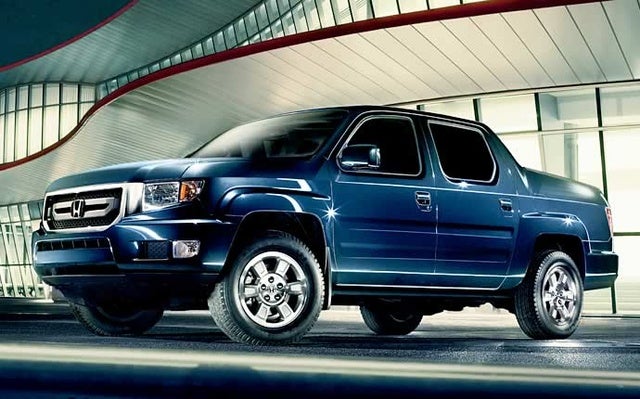 Providing a comfortable, tough-to-beat ride, the 2010 Honda Ridgeline is a truck that can handle an assortment of pickup-style chores.

The 2010 Honda Ridgeline’s unique look and style are not for everyone. But its comfortable ride and versatility - the in-bed trunk works just as well for golf bags as it does for toolboxes - have made believers of those who've given the Ridgeline a shot.

The 2010 Honda Ridgeline may not look quite like a truck to some - its styling has not grown on everyone - but it certainly plays the part of the sports utility truck in the Honda lineup. It has its share of pluses, including that it handles well and offers a very comfortable ride, more car-like than truck-like.

It’s a crew-cab pickup that seats five, has a good-sized bed for hauling, and can tow up to 5,000 pounds. It also features an in-bed, lockable trunk. The Ridgeline is not a truck made for heavy lifting, but it’s a nice, affordable choice for those doing their truck work on the weekends and looking for a smooth ride the rest of the week.

The Ridgeline got spruced up for 2009, and little has changed for 2010; word is that Honda plans a Ridgeline makeover in short order. The Ridgeline comes in three trims: The base trim is the RT, and next up are the RTS and RTL. An integrated Class III trailer hitch is now standard for all trims.

A 3.6-liter V6 powers all 2010 Honda Ridgelines, which also have a five-speed automatic transmission. This powertrain puts out 250 horsepower and 247 lb-ft of torque. Ridgelines run on regular unleaded, though premium fuel is recommended when towing.

EPA estimates are 15 mpg city, 20 on the highway. Ridgelines come with Honda’s Variable Torque Management four-wheel-drive system, which it calls, “full-time on-demand four-wheel drive.” For getting going in tough conditions, the rear differential can be manually locked, and it will stay locked until about 18 miles per hour.

When equipped with Honda’s towing package, the Ridgeline can trailer a 5,000-pound load. The RT and RTS trims are rated for a payload total of just over 1,500 pounds, and the RTL is just under that mark. The in-bed trunk is a popular feature.

The 2010 Honda Ridgeline scores points with experts for its smooth and car-like ride and handling. While the Ridgeline, they note, is not designed and built to handle the rugged duties some of its competitors tackle, that can be a good thing when it comes to offering an impressive ride. Experts call the ride comfortable and pleasant, especially compared to other pickups.

Reviewers feel the 2010 Ridgeline gets around town and down the highway fairly well, though some note it’s a bit underpowered for hauling and towing. It generally draws praise for its steering and responsiveness.

The RT and RTS trims ride on 17-inch wheels. The RTL has 18-inchers. 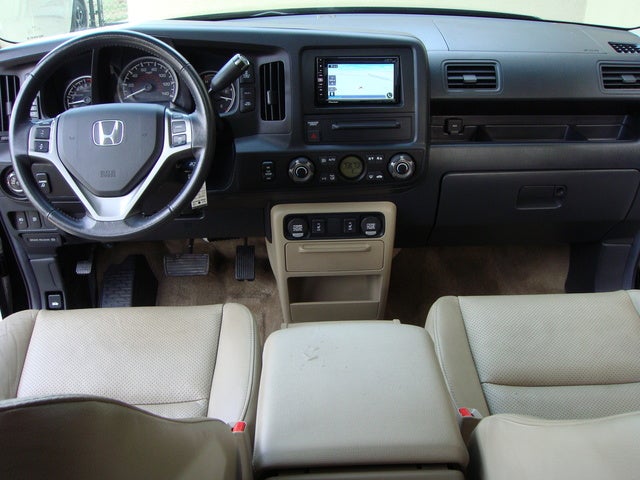 Reviewers give mixed grades to the 2010 Honda Ridgeline when it comes to comfort and the interior of the rig. They like the roominess of the cabin and the storage space. But while some like the seats and feel the layout provides plenty of room to stretch out, others feel the seats themselves could be more comfortable. The RT trim has a six-way adjustable driver’s seat. The RTS and RTL driver’s seats are 10-way adjustable.

While some experts note the quality of construction in the interior, others point to materials they feel aren’t up to par. There have been complaints in the past about the placement of controls in the cabin, but some of those concerns seem to have been alleviated with a few design changes.

The Ridgeline receives praise, common to the Honda family, for its easy-to-use gauges. Reviewers also appreciate the interior features that come standard, including power windows for both the front and rear and a center console. The RTL trim features leather upholstery, along with heated front seats and a moonroof.

In frontal crash tests, the 2010 Ridgeline earned five out of five stars for driver and front passenger protection. It earned a four-star rating in rollover tests.

Reviewers feel the Ridgeline comes up short in that it does not provide a rear parking-assist system to alert the driver to objects behind the vehicle as a standard feature. The fact that the Ridgeline has some visibility issues toward the rear compounds the problem. A navigational system that includes a rear-view camera is available only in the RTL trim.

The first thing most owners note about the 2010 Honda Ridgeline is its smooth, quiet, and comfortable ride. It’s so smooth, in fact, that it’s been called “Accord-like.” Owners also cite the way the Ridgeline handles, in good conditions and bad. Not bad for a vehicle that also does its share of truck work. The in-bed, lockable trunk draws it share of praise, too, and adds much to another of the Ridgeline’s features, its versatility.

Some owners report they have had issues that needed to be addressed with the Ridgeline’s brakes.

Owners are mixed on a couple of aspects of the Ridgeline. Some report that its gas mileage is pretty good, while others mark mileage down as a negative and wish it were a little better. In the same vein, some like the vehicle’s power, but there are those who feel it could use a bit more oomph and hope Honda bumps the engine up to a V8.

What's your take on the 2010 Honda Ridgeline?

Toni I'm shopping for one

Have you driven a 2010 Honda Ridgeline?
Rank This Car

How often should the timing belt be changed for a honda ridgeline 2010?

it shows 90 saved vehicles...but wont pull ANY up. How do i fix this?

LIsting Out Of Date But Plagues Me Online. UPdates To YOUR Site Need To Be...

I searched long and hard for a particular vehicle only to find it had been sold...and probably some time ago..but still listed on carguru. Why should I trust your site for accurate info and waste m...