With the addition of several new standard features for 2010, including remote keyless entry, antilock brakes, and electronic stability control, the Ford Focus becomes an even better value for drivers seeking an affordable and economical yet well-reviewed compact sedan or coupe.

Interior materials remain inferior in the '10 Focus, when compared to materials used in competitive vehicles, and taller passengers might feel cramped in the back seat. 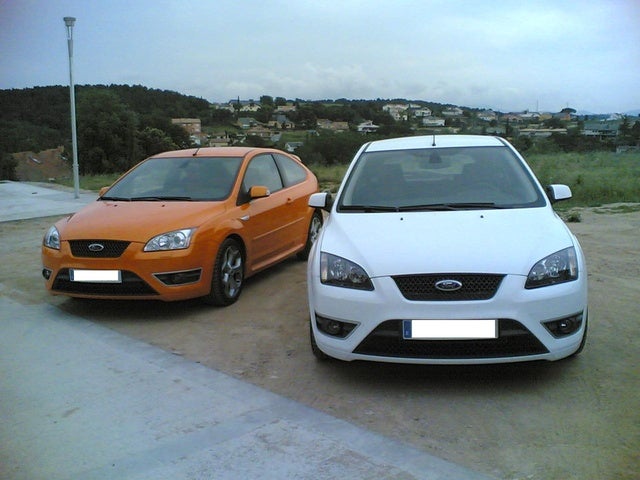 The 2010 Ford Focus provides one of the bright spots of the American auto industry. Although some reviewers and owners find its exterior and interior design unexciting, the Focus delivers in a number of key areas and receives positive marks from owners for its fuel economy, handling, exterior styling, and interior design. The Focus faces stiff competition in the compact sedan segment, but owners looking for a capable, confident sedan from an American automaker should give the Focus strong consideration.

The Ford Focus, available as both a compact sedan and coupe, receives a number of updates for 2010. A new standard feature called MyKey, making its debut on the 2010 Ford Focus, provides parents with the ability to limit the speed of the vehicle and the volume of the audio system when teenagers are driving the car. By limiting the speed of the Focus, no matter who's driving, owners also can improve the Focus's overall fuel efficiency. In addition, Ford upgrades the SYNC communications and entertainment system, which comes standard on certain Focus trims. The infotainment device, which enables drivers to vocally control MP3 players and make automatic calls to emergency services in the event of an accident, now includes GPS hardware, which gives owners access to traffic, turn-by-turn directions, sports scores, entertainment news, and other information through Bluetooth-enabled mobile phones. Other new standard features for all Focus trims for 2010 include remote keyless entry, power door locks, antilock brakes, and electronic stability control. 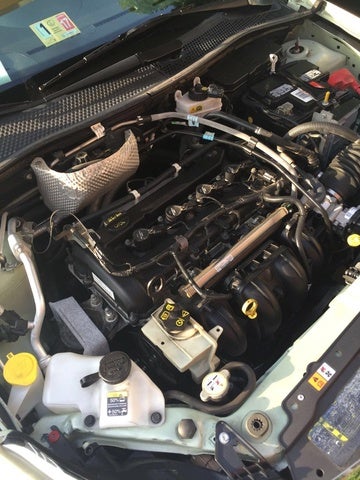 A 2.0-liter, dual-overhead-cam Duratec 20 inline four-cylinder (I4) engine powers all Focus trims. In sedan trims, the four-cylinder generates 140 hp and 136 lb-ft of torque. A five-speed manual transmission with overdrive comes standard, although owners can opt for an electronically controlled four-speed automatic transmission. When linked to the manual transmission, the engine achieves EPA-estimated fuel economy numbers of 24/35 mpg, which drop slightly to 24/33 when the engine hooks up to the automatic. For coupe trims, the automaker tweaks the engine slightly to achieve 143 hp when mated to the five-speed manual, as well as a throatier exhaust note. Fuel economy numbers remain the same for the tweaked four-cylinder.

In states requiring low-emissions engines, such as California, Ford drops a super-clean, 132-hp version of the four-cylinder engine, dubbed the Duratec 20E, into the Focus. The engine qualifies the Focus as a Partial Zero Emissions Vehicle (PZEV). The 20E's tailpipe emissions are cleaner than some hybrid gas-electric vehicles' emissions, the automaker notes. Fuel economy numbers for the low-emissions engine remain unchanged from the standard version.

Equipped with the standard four-cylinder powerplant, the Focus accelerates from 0-60 in just under 7 seconds and has a cruising range of 378 miles. The four-cylinder runs on regular unleaded gasoline.

The 2010 Ford Focus rides on a European-inspired suspension with independent MacPherson struts and a stabilizer bar in the front, an independent multilink system in the rear, and hydraulic gas-pressurized shocks in both front and rear. The SES and SEL trims receive an enhanced version of the same suspension, resulting in a sportier ride, with better overall balance and grip.

Both the suspension and the engine get good marks from owners and reviewers and provide competent performance. As might be expected, many recommend the manual shifter for owners who prefer to put the Focus through its paces, though the automatic provides smooth acceleration and draws few complaints. Many owners comment on the Focus's good road grip, nimble handling, and responsive rack-and-pinion steering. Braking on all trims is confident, although some find the pedal feel average. The S and SE sedans ride on 15-inch wheels, while the SES and SEL sedans, as well as the SE coupe, receive 16-inch aluminum alloy wheels. For a sportier driving experience, the SES coupe rides on 17-inch premium dark-stainless-aluminum wheels.

Inside, the Focus's front seats are supportive and comfortable over long distances. Drivers will find a well-arranged dashboard, with generally intuitive controls close at hand and easy to read. The instrument gauges are similarly well laid out and easy to view. A digital readout on the top of the dash displays important information, such as radio settings, at eye level, which helps drivers keep their eyes on the road ahead. Interior storage spaces include a full-length center floor console with cubbies, front door bins, integrated cupholders in the front and rear, and a map pocket on the front-passenger seatback.

Although Ford upgraded the interior of the Focus in 2009, many owners still find the quality of interior materials lacking, especially when compared to interiors offered by competitive vehicles. Still, the Focus's interior is well laid out, with plenty of legroom and headroom in the front seats. Most will find adequate room in the rear seat as well, though taller passengers might feel a little cramped. Front bucket seats feature adjustable head restraints, while a 60/40 split-folding rear seat adds flexibility when carrying cargo.

Options include a power moonroof and a premium audio system with a 6-CD changer. For storage, the Focus offers a roomy trunk with 13.8 cubic feet of cargo space and easy access.

Although the 2010 Ford Focus has not yet been crash-tested, the very similar '09 Focus achieved a top rating of five stars in front-impact crash tests from the National Highway Traffic Safety Administration and three stars in side-impact crashes. In addition, it received four stars for rollover resistance.

While many owners opt for the Ford Focus because of its value and fuel economy, many are pleasantly surprised by its other features, including its performance, handling, styling, and roomy interior. Owners especially like the layout of the dash and controls, the driver's seating position and visibility of the road ahead, the Focus's ride and handling, and the SYNC system. The lack of some standard features, such as cruise control, on lower-end trims remains a problem for some owners, and some note the use of inferior materials in the cabin. However, most owners are pleased with the Focus's fuel economy and call it an excellent commuter car.

Users ranked 2010 Ford Focus against other cars which they drove/owned. Each ranking was based on 9 categories. Here is the summary of top rankings.

Have you driven a 2010 Ford Focus?
Rank This Car

My focus just had brakes replaced, and the abs and check brake system lights are still on, also the power steering fluid is bubbling out. Mechanic told me to drive it around to get the air out of t...

What Is The Flashing Red Lite On My Instrumental Panel

Just changed water inlet?? (Just left of pcm) and now whn I insert key, a red lite w a car and padlock symbol is flashing in left corner of instrument panel. And car won't turn over or anythng

hello i have a 2010 ford focus about 2 months ago my keys stopped working to start my car so in that time i started using my fob to start my car with the automatic start now both my keys and fob wil...

Radio Display Went Out On My 2010 Ford Focus