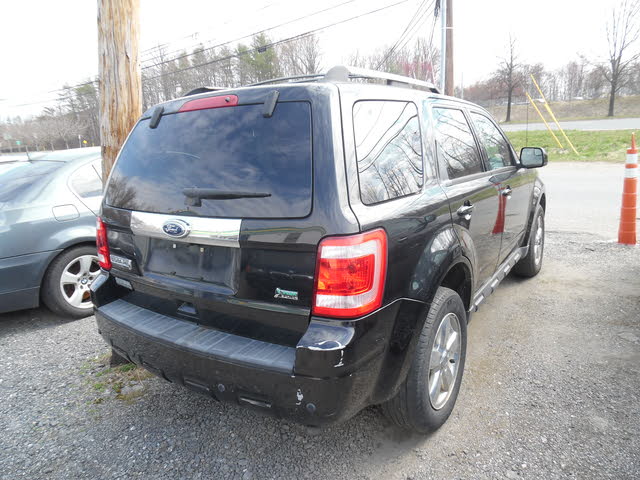 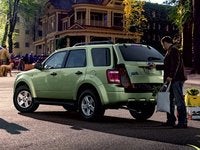 Ford’s 2010 Escape Hybrid is reliable, efficient, comfortable, and nearly as green as a California golf course.

Iffy braking distances, some chintzy cabin materials, a somewhat dated exterior, stiff base price, and the lack of some of the more common standard amenities cramp the 2010 Escape Hybrid’s style.

If a small SUV that offers excellent fuel efficiency, most of the basic goodies, and laudable safety scores sounds appealing, then consider the 2010 Ford Escape Hybrid. All of this, of course, comes at a premium price, and may leave some pondering the wisdom of sacrificing cabbage for conscience. The Escape Hybrid isn’t perfect, or cheap, but it remains reasonably popular and is backed by Ford solvency.

Relatively unchanged from 2009, the 2010 Ford Escape Hybrid offers a few upgrades in options and safety features, but, with one exception, little updating as far as styling or performance is concerned. This compact hybrid SUV is available in two trim levels, the Base and Limited, and each can be delivered with either front-wheel drive (FWD) or full-time four-wheel drive (4WD). The five-passenger, five-door Escape Hybrid offers a hefty number of standard and optional amenities, as well as 66 cubic feet of cargo space. The Escape Hybrid is a first cousin of the Mercury Mariner Hybrid, each sharing the same chassis, drivetrain, and transmission.

Brand-new standard features include larger outside mirrors that are touted to eliminate blind spots, and the MyKey system, which allows parents to set the top speed and audio volume on the Escape Hybrid, thus ensuring a safer vehicle for Junior or Sis to use on prom night. New-for-2010 options include a rear-view camera system, enhanced SYNC features, and, for the Limited trim, Ford’s highly regarded Auto Park system that all-but-guarantees one-shot parallel parking.

The 2010 Escape Hybrid also features an electric-drive climate control system, whereby air conditioning and heat are maintained by the accessory-dedicated electric motor when the gasoline engine is shut off at a stop light. This particular feature was introduced for the ’09 model year after numerous complaints about a lack of climate control comfort during engine shut-down.

The traditional two-mode system is utilized by the 2010 Ford Escape Hybrid to not only gain significantly higher mileage, but to run greener as well. A 2.5-liter inline four-cylinder (I4) gasoline engine generating 177 hp at 6,000 rpm and 136 lb-ft of torque at 4,500 rpm constitutes the primary power source for this hybrid SUV. The gas engine is supplemented by two electric motors that are fed by a nickel-metal hydride (NiMH) battery. Each of the electric motors is also boosted with a regenerative braking system. The auxiliary propulsion motor can generate some 70 kW of output, good for 94 hp at 5,000 rpm. Allegedly, the Escape Hybrid can do close to 40 mph on electric power alone for short stretches; the second large electric motor, meanwhile, is used to power accessories (such as the climate control mechanisms) when the vehicle is stopped. In a slight jig with tradition, the 2010 Escape Hybrid 4WD trims come with a third electric motor that feeds power to the rear wheels when needed.

The Escape Hybrid’s gas/electric powertrain is managed by a continuously variable transmission (CVT) that essentially eliminates missed shifts and is the transmission of choice in most hybrids today. The CVT remains the sole transmission system versatile enough for both congested city streets and open highways.

Reviewers find that the Escape Hybrid essentially performs up to the standards of the gas-powered Escape, with acceleration from 0-60 in the range of 9 seconds. Mileage, however, at 34/31 mpg for the Escape Hybrid’s FWD versions and 29/27 for AWD trims, is claimed to be “best in class,” by virtually all testers, as well as the EPA.

Equipped with the same suspension as its gasoline-only sibling, the 2010 Ford Escape Hybrid retains the comfortable and stable ride and handling characteristics lauded by both reviewers and owners of the conventional Escape. A four-wheel independent suspension with MacPherson front struts, front and rear stabilizer bars, and a multi-link rear end equate to better-than-average cornering, almost no noseplow, and, with the Escape’s standard 16-inch alloy wheels, little bump and grind over rough road surfaces. Noise, however is a whole ‘nother thing.

The hybrid system, of course, adds several hundred pounds to the Escape's frame, thus the 2010 Escape Hybrid may not be quite as nimble as its conventionally powered sibling. By and large, however, this hybrid SUV has reviewers reasonably impressed with its handling capabilities. Yet braking continues to be an issue with the Escape, in both hybrid and conventionally powered vehicles. Virtually all professional reviewers claim that with practice, drivers will adapt to the unusually lengthy braking distances, and most are scratching their heads over the reasoning for swapping rear disc brakes for drums in the 2008 model year. 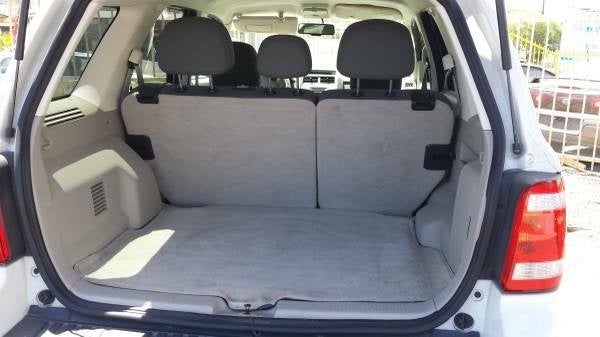 Interestingly, reviewers make little of the fact that the 2010 Escape Hybrid offers no telescoping steering wheel, no rear-seat video entertainment, and no power liftgate, all seemingly common options at this price level. Reviewers also agree that the Escape Hybrid has some less-than-inspiring cabin materials and mildly intrusive engine, wind, and road noise. Overall, however, professional reviewers note that the Escape Hybrid presents a roomy aerie from which to see the sights and keep an eye on traffic.

The 2010 Ford Escape Hybrid garnered a “top pick” in 2009 from the Insurance Institute for Highway Safety (IIHS). That says something about just how well-engineered the Escape is as far as passenger safety is concerned. Additionally, virtually all professional reviewers laud the 2010 Escape Hybrid as one of the safest small SUVs on the market.

Standard safety features for the Escape Hybrid include four-wheel ABS with electronic brakeforce distribution, traction and stability control, dual front side-mounted airbags, and front and rear head curtain airbags. Front fog/driving lights are standard with the Escape Hybrid Limited and optional on the Base trim.

The National Highway Traffic Safety Administration (NHTSA) gives the 2010 Escape Hybrid five stars for front and side impact testing across the board. Rollover ratings garner three stars for both the FWD and 4WD trims, slightly less than the class average. 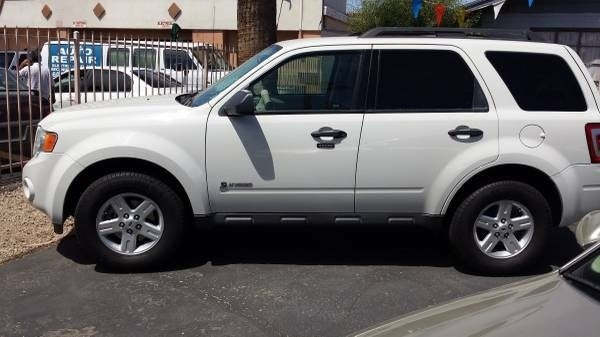 One drawback some owners of the 2010 Escape Hybrid notice is its less-than-cutting-edge exterior styling. This glitch, however, is balanced by praise for its interior ambiance, despite mention of its “tacky” plastic interior trim. The Escape Hybrid’s navigation system has proven a bit difficult for some owners, but virtually all laud Ford’s SYNC infotainment system. The fold-down rear seats have come in for criticism by owners, as has a disturbing engine sound on brisk acceleration and lack of rear disc brakes.

Essentially, owners are quite pleased with the Escape Hybrid’s mileage figures, better-than-average performance, roomy cabin, comfortable and stable ride, and visibility-enhancing high stance, not to mention its reduced carbon footprint. Mention has even been made of the value this small SUV packs, no matter its rather hefty base price, though a number of owners are a bit disappointed by the Escape Hybrid’s dearth of standard features common to vehicles in this price range.

Individual standard and optional features that draw kudos from owners include the overly large center console, rear-view camera system, and 40-mph giddy-up on electric power alone. One final detail lauded by a few owners includes the hybrid tires mounted on the Escape Hybrid. These low-profile tires are claimed to increase fuel efficiency by 1 mpg.

What's your take on the 2010 Ford Escape Hybrid?

Have you driven a 2010 Ford Escape Hybrid?
Rank This Car

How do you reset the engine oil change message for a 2010 Ford Escape/ Why don't they put this in the owner's manual?

Air Conditioning On One Side And Heat On The Other

Hi! I’m driving a great 2010 Ford Escape hybrid. Suddenly, today, I have heat blasting out of driver’s vents and A/C on passenger vents. (I’m impressed they aren’t just the same system). Any sugge...

On My 2010 Escape Hybrid, Will It Recharge Itself?

I left phone charger on and killed battery. Will it recharge itself? How long if it is freezing weather?

2010 Ford Escape Hybrid, What Do You Set The Temp Control To Get Heat In Co...