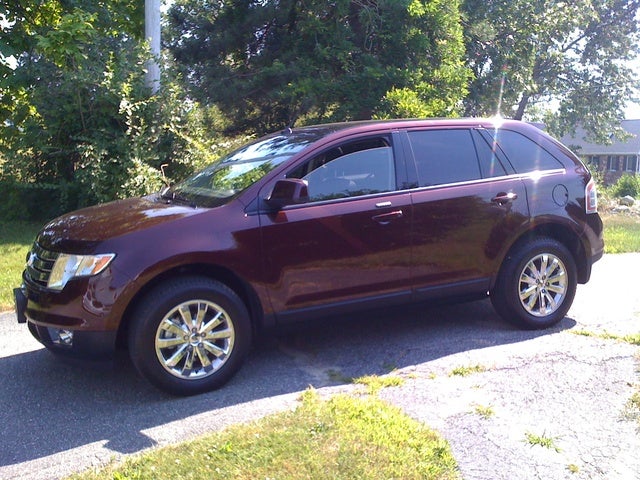 Shoddy cabin materials, worrisome brakes, a hesitant transmission, pricey options packages, and a propensity to rest on past laurels will win the 2010 Edge few further prizes.

With a little bit of TLC from the folks at Ford, the 2010 Edge could once more preside over the fiercely competitive midsize crossover market. Family friendly, and still a decent value when the options are reined in, this sturdy crossover is worth a second or third look.

A year after its introduction in 2006, Ford’s Edge had garnered a number of awards, as well as a significant number of positive reviews in the automotive press. The 2010 Ford Edge, though still a family-friendly four-door, five-passenger crossover SUV, could use a bit more love from the Ford design team.

Available in four trim levels - SE, SEL, Limited, and Sport - the 2010 Edge is, with little trim tinkering and minor cosmetic upgrades, a carryover from 2009. All trims but the base-level SE are offered with front-wheel drive (FWD) or all-wheel drive (AWD), and all offer two rows of seating, with up to 69 cubic feet of cargo capacity when the rear seats are folded down.

While the Edge offers a plethora of standard safety features and creature comforts at a reasonably modest base price for 2010, options, though plentiful, quickly jack its justifiable base price to stratospheric levels.

It’s well known that competition is fierce in the crossover market. The likes of the five-passenger Nissan Murano and Toyota Venza, or the seven-passenger Chevy Traverse, Ford's own Flex, Mazda CX-9, and Hyundai Veracruz each tout more refinement and value than the straggling Ford Edge. With luck, those whose destiny rides with this sturdy crossover will realize that they could once more have a top contender with just a little attention to interior quality and exterior style, as well as a few mechanical tweaks here and there. 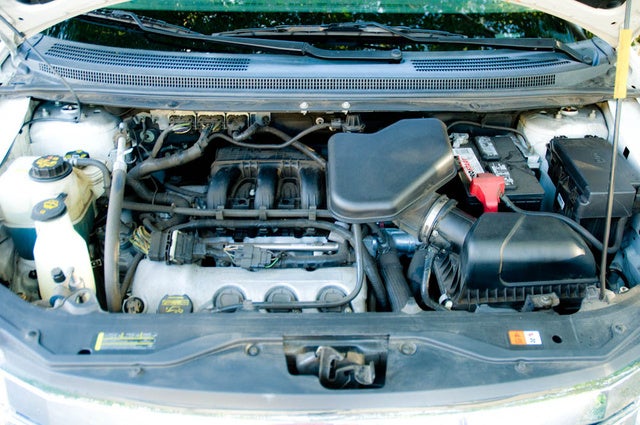 The only drivetrain available with the 2010 Ford Edge lineup features a 3.5-liter DOHC, variable-valve-timed V6 that’s managed by a six-speed automatic transmission. This pairing generates 265 hp at 6,250 rpm and 250 lb-ft of torque at 4,500 rpm, good enough to tow 3,500 pounds of trailer when the optional Class II Trailer Towing Prep Package is added on all but the Sport trims. Some professional reviewers describe the 2010 Edge as quick enough from a stop, but a number of independent tests resulted in a tepid 8.2-second 0-60 time.

Reviewers describe the 2010 Edge’s six-speed automatic as smooth enough for most driving conditions. However, virtually all reviewers find a disturbing reluctance in this transmission to downshift without a hefty jab at the gas pedal, creating a little unease when merging and passing on the highway. The lack of an auto-manual feature with this otherwise-steady gearbox doesn’t help the situation.

Offering a four-wheel independent suspension system, with MacPherson front struts, front and rear stabilizer bars, and a multi-link rear suspension, ride and handling characteristics of the 2010 Ford Edge are regarded by reviewers as better than average. Steering is strong, yet forgiving, and the Edge’s Mazda-derived chassis proves fully capable of delivering a pleasant ride and adept handling, though some professional reviews note a bit of excess body lean and tire squeal in tight corners.

For 2010, wheel sizes on the various Edge trims range from 17-inch on the SE to 18-inch on the SEL and Limited to standard 20-inch wheels on the Sport. In an effort to provide a bit more driving pizazz, the Sport offers available 22-inch wheels and a sport-tuned suspension to go with them. The ride, of course, becomes a bit stiffer with this beefier suspension package.

Brakes, on the other hand, have been a perennial problem with the Ford Edge. Though reviewers find a noticeable improvement over past years, all mention less-than-inspiring braking distances and a spongy pedal with 2010 trims.

Full-time all-wheel drive (AWD) is available on all but the SE trim. With its center limited-slip differential and AdvanceTrac stability control system, the AWD Edge powers through snow and mud in fine fashion, but don’t plan on any serious off-roading.

Undeniably, one of the strong suits of the 2010 Ford Edge is its abundance of standard cabin comfort and convenience features. Many professional reviewers and owners, however, mention sub-par cabin materials and a somewhat dated look to the stereo system.

Traditionally a strong suit with most Ford products, safety hasn’t been overlooked for the family-oriented 2010 Ford Edge. The usual four-wheel disc ABS, the AdvanceTrac system's traction and stability control, and dual front side-mounted airbags, front and rear head curtain airbags, child seat anchors, child-proof rear door locks, and a post-collision safety system are standard across the entire lineup. Front fog/driving lights and dusk-sensing headlights are available safety features for the 2010 Edge SE trim and standard on all others, while rear parking sensors are standard on the SEL, Limited, and Sport trims.

In front-impact tests, the National Highway Traffic Safety Administration (NHTSA) gives the 2010 Ford Edge five stars for driver’s safety and four stars for passenger safety, while rear-passenger safety is rated at five stars for side impact. A four-star rating is given to the Edge for rollover protection. Additionally, the Insurance Institute for Highway Safety gives the 2010 Edge its best rating of “good” in front and side impact tests.

A lack of interior refinement in the 2010 Ford Edge, as well as less-than-economical gas mileage, so-so brakes, limited stand-alone options choices, and a decided lack of trailer-towing torque with its standard 3.5-liter V6 are the most common owner complaints. Additionally, at least one owner feels the Edge is not “edgy enough” as far as exterior styling is concerned. The latter, however, seems an uncommon sentiment given that the Edge’s looks more than satisfy an overwhelming majority of owners.

Ride comfort and strong engine performance draw the most praise from owners of the 2009/2010 Edge. As well, a functional, quiet, and roomy, if not exactly spiffy interior design also pleases owners. Such convenience features as the wide-view blind-spot-eliminating exterior mirrors, Vista Roof, and Sync/Bluetooth technology are also well-appreciated.

psemon Looking for an answer on how to get these breaks adjusted. I took this car to 2 different mechanic's and also spoke to a ford mechanic that works at a dealership. All told me there's nothing wrong with the break system. It's just a bad design ( soft breaking system )? I don't know how many time's I thought I was going to rear end the guy in front of me! The pedal almost hit's the floor. Alway's pumping the pedal to stop. Love the car, hate the break's. Any answers? psemon@msn.com pumping the pedal to stop.

Users ranked 2010 Ford Edge against other cars which they drove/owned. Each ranking was based on 9 categories. Here is the summary of top rankings.

Have you driven a 2010 Ford Edge?
Rank This Car

Loss Of Power While Driving

today, while driving, the vehicle simply lost all power and had to be immediately pulled over. after a few minutes tried to start the vehicle and it worked fine. driving conditions were cold and wet...

None Of The Power Outlets Work In My Edge. Fuses Seems To Be Ok. Any Ideas

I am unable to use the gps or phone charger. The outlets stopped working. Auto zone looked at my fuses they appear to be good. Any ideas

946 views with 2 answers (last answer about a month ago)

While driving on the freeway my ford edge died the engine light oil light and battery light came on after it died. What might be the problem?

Every Time I Go For Gas The Pump Shuts Off Even Though I Am On Empty. Pleas...