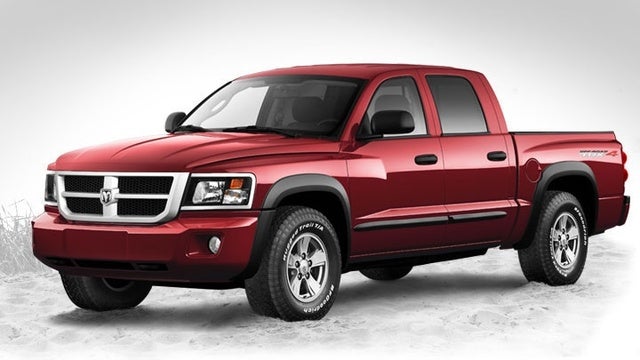 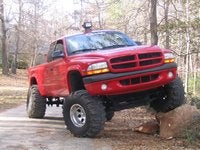 A powerful optional V8 engine and a solid frame endow the 2010 Dodge Dakota pickup with excellent towing and payload capacity.

The 2010 Dakota suffers from a lack of refinement, manifested in its choppy ride, sub-par interior design, and coarse base engine.

Subtly upgraded for 2010, Dodge’s midsize Dakota pickup possesses a strong work ethic courtesy of its beefy construction and available V8 engine. The Dakota’s generous dimensions bridge the gap between compact and full-size trucks and provide for a spacious cabin. Yet the 2010 Dakota lacks the polish and refinement that today’s buyers expect.

The venerable Dodge Dakota gains a revised suspension for 2010, its final year of production. The uniquely sized pickup has filled a marketplace niche for over 20 years, but flagging sales and the prospect of an expensive redesign have contributed to Dodge’s decision to retire the Dakota nameplate in 2011. The 2010 Dakota rides on a traditional full ladder frame with leaf-spring rear suspension, a configuration that enables it to shoulder heavy loads without complaint. Unfortunately the Dakota’s heavy-duty underpinnings also saddle it with a rough ride and unrefined demeanor.

Four 2010 Dakota trim levels are offered. Base ST trims come only with V6 power and are aimed at the work truck market. The BigHorn trim (called LoneStar in Texas) upgrades the Dakota’s appearance with body-color fascias and 17-inch wheels while offering buyers the powerful V8 engine as an option. The penultimate TRX trim is aimed at off-road adventurers and includes a limited-slip rear differential and underbody skid plates, along with a power driver’s seat, while the range-topping Dakota Laramie is decked out with leather upholstery, 18-inch alloy wheels, and a 276-watt, 6-CD stereo.

The 2010 Dakota will appeal to buyers who value capability and toughness over refinement and comfort. Unfortunately for Dodge most of those customers are stepping up to full-size pickups, leaving the small/midsize market to suburban homeowners and recreation enthusiasts for whom sophistication matters as much as towing capacity. By that yardstick the 2010 Dakota falls far short of its competition, leaving little question as to why Dodge is discontinuing the endearing yet outmoded pickup. 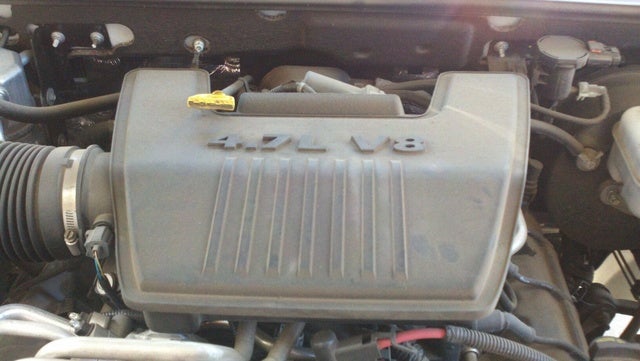 For 2010 all Dakota trims feature a standard 3.7-liter V6 engine mated to a four-speed automatic gearbox. Despite generating a respectable 210 hp and 235 lb-ft of torque, the base engine’s gritty power delivery and lumpy idle are unwelcome even in a rough-and-ready truck. With only four ratios to call upon, the transmission magnifies the base motor’s shortcomings and delivers sub-par shift quality.

An optional 4.7-liter V8 is offered on all but the base ST trims and should be considered mandatory. For an added cost of $985, the V8 churns out 302 hp and 329 lb-ft of torque and includes a five-speed automatic transmission. In addition to providing much smoother operation, the V8 offers greatly improved acceleration; 0-60 mph arrives in under 8 seconds. Both engines mate to a rear-wheel-drive axle that features a 3.92 gear ratio that balances power and fuel economy. Optional part-time four-wheel drive (4WD) is actuated via a cabin-mounted switch and lowers the axle ratio to 3.55; TRX trim levels get a limited-slip rear differential. With the V8 engine the Dakota can tow up to 7,200 pounds.

For 2010 Dodge has revised the Dakota’s suspension settings, softening the shocks and springs with the aim of improving its stiff highway ride. While the changes take the edge off some larger bumps, the Dakota still suffers in the ride quality department when compared to its competition. Around town the Dakota’s large size and numb rack-and-pinion steering hamper maneuverability, while on the highway the modified suspension still doesn't provide the supple ride today’s buyers expect.

Cornering is not the Dakota’s forte; it’s imprecise and hard to place in turns and suffers from too much body roll. Though rough and unrefined on the highway, the Dakota’s beefy suspension comes into its own off-road. Its generous ground clearance and heavy-duty frame allow 4WD trims to venture far into the back country. 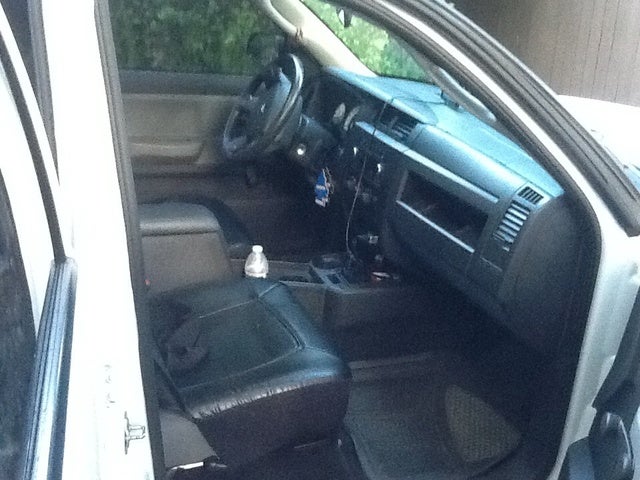 Owing to its plus-size dimensions, the 2010 Dakota’s interior is quite spacious. Front seat passengers are treated to plenty of leg and elbow room. The front bucket seats provide adequate support and a wide range of adjustment, while the optional front bench can seat three passengers. The rear jump seats offered in Extended cab Dakotas are rather tight and have trouble accommodating grown adults, but still provide more room than the second row of most compact trucks. Crew cab trims offer a 60/40-split-folding rear bench with plenty of room for three passengers and convenient under-seat storage.

While roomy, the Dakota’s interior suffers from a dowdy design and low-rent materials. Its plain-Jane dashboard is rendered in ill-fitting, rock-hard plastic. Interior switchgear is logically placed and easy to operate, but feels chintzy. The carpeting and upholstery have an industrial feel, and the lack of sound deadening contributes to a noisy cabin.

For the most part Dodge Dakota owners rave about their truck's heavy-duty capabilities. Many buyers were wooed by the Dakota’s brawny towing capacity and rock-hopping off-road ability, while others complain that the ride is too choppy. Owners praise the V8 engine’s power and torque, but are less than impressed with its prodigious thirst for fuel.

Have you driven a 2010 Dodge Dakota?
Rank This Car

I Have A Dodge Dakota And The Hazards Work But The Signal Light Does Not.

I will try to get my hand on a volt reader to see if its getting power I have a spare signal switch I can try to replace but Im curious to know why the hazards come on but not the signal. No noise o...

2010 dodge Dakota transmission fluid what kind does it matter

How Do I Sell A Vehicle On This Site

where is the fuel filter located om my 2010 dodge dakota