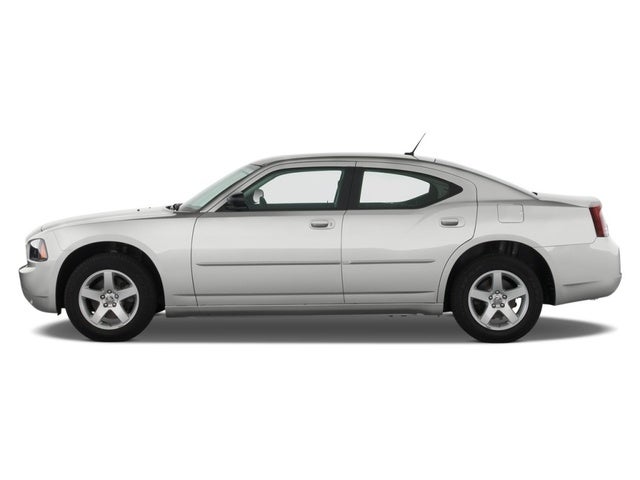 Downsides to the Charger include a somewhat flighty steering feel, difficult rear entry and exit, impeded side and rear visibility, and a base V6 engine that gulps more than its share of gas, yet barely gets out of its own way.

The 2010 Charger sedan, while targeted at a specific audience, nevertheless offers a competent ride and enough powerful performance attributes to appeal to just about anyone under seventy. The SXT and R/T all-wheel-drive trims, meanwhile, handle adverse weather with style and aplomb. All in all, muscle-bound image or not, the midlevel Charger trims fill the family sedan niche nicely, and look sharp doing it.

As the last of the American muscle cars, the 2010 Dodge Charger occupies a unique place in the U.S. auto market. There are indeed many out there who appreciate retro styling, gas-guzzling V8 power, and weighty ride characteristics. And don’t forget the cops; the Dodge Charger is without doubt the cruiser du jour. The 2010 Charger (along with its Chrysler 300 cousin) is a result of the what-were-they-thinking merger of Chrysler and Daimler/Benz, integrating a number Mercedes-inspired suspension and chassis ideas into its most recent version. But make no mistake, the Charger is meant to be a throwback to the days of bold styling, rear-wheel-drive power, iron engines, iron men – and cheap gas.

The 2010 Charger is available in four trims, the Base, which Dodge refers to as the SE, the lower-midlevel SXT, the upper-midlevel R/T, and the flagship SRT8. All trims are delivered as standard rear-wheel-drive (RWD), five-passenger sedans, with the SXT and R/T each available in full-time all-wheel-drive (AWD) configurations. Both the Base and SXT trims are equipped with standard V6 engines, with each RWD version packing the standard four-speed automatic transmission, and the SXT AWD trim carrying a five-speed auto-manual. The R/T and SRT8 trim levels boast standard V8 engines and five-speed auto-manual transmissions. A roomy cabin and capacious trunk are staples of Chrysler sedans, and the 2010 Charger is no exception. Standard comfort and convenience amenities are plentiful, especially in the higher trim levels, and options packages, though traditionally confusing, are reasonably comprehensive.

Safety, never a strong suit with lower-end Dodge and Chrysler vehicles, is at least given a slight nod in the Base Charger with front and rear disc brakes, as well as optional ABS, traction and stability control, and front and rear head airbags. Meanwhile, the upper-echelon trims sport these common safety features as standard equipment.

With the retirement of the Pontiac G8 GT, the Dodge Charger stands alone at the top of the V8-powered sedan market. Competition, however, in the form of such lighter-weight, more refined, and much more economical midsize sedans like the Ford Fusion, Nissan Altima, and Mazda6 proves that there’s money to be saved in opting for practicality over reminiscence. 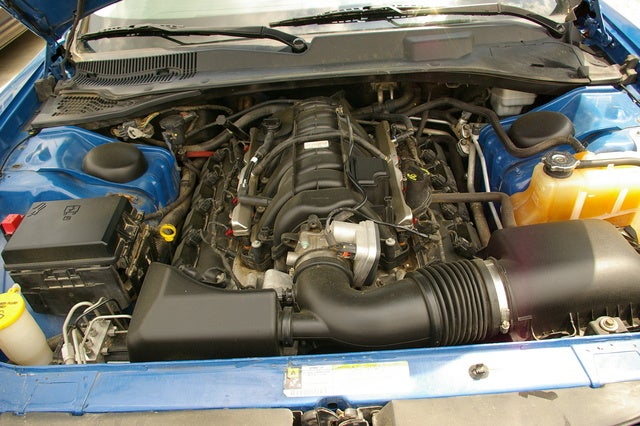 From what reviewers describe as a clunky, inefficient 2.7-liter V6, with its equally clunky and inefficient four-speed automatic, to the reviewer-approved, super-potent 6.1-liter V8, managed by the reasonably smooth five-speed auto-manual transmission, the 2010 Dodge Charger has a powertrain for just about everyone.

The Base Charger carries the standard 2.7-liter V6 and four-speed automatic that combine to achieve 178 hp and 190 lb-ft of torque. Mileage is a depressing 18/26 mpg. The SXT begins to show some beef with its standard 3.5-liter V6 that puts out a respectable 250 hp at 6,400 rpm and 250 lb-ft of torque at 3,800 rpm. The Charger SXT RWD trim is equipped with the four-speed automatic, while the AWD SXT boasts the five-speed auto-manual transmission. The RWD SXT is estimated at a still-tepid 17/25 mpg, while the AWD trim gets 17/23.

The muscled-up Charger R/T trims sport Chrysler’s legendary 5.7-liter V8 Hemi engine that, when combined with the standard five-speed auto-manual transmission, throws down 368 hp at 5,200 rpm and 395 lb-ft of torque at 4,350 rpm. Mileage for the variable-valve-timed Hemi V8, with cylinder deactivation, is estimated at 16/25 for the RWD R/T and 16/23 for the R/T with AWD.

Then there’s the Charger SRT8 that packs the highly touted, seriously-on-‘roids 6.1-liter OHV V8 engine. This monster is managed by the standard five-speed auto-manual transmission to pound out 425 hp at 6,200 rpm and 420 lb-ft of torque at 4,800 rpm. Burning premium gas, this titan gets an EPA-wincing 13/19.

While dismissing the 2.7-liter V6 as rental-car fodder, virtually all reviewers regard the 3.5-liter V6 as adequate for most driving situations, with reasonable, if not head-snapping acceleration (0-60 in about 9 seconds) and better-than-adequate merging and passing power. Needless to say, both V8s rated high on professional reviewers’ wish lists. The SRT8’s 6.1-liter V8 tested 0-60 in 5.3 seconds – ‘nuff said.

The beefy 2010 Dodge Charger is claimed by professional reviewers to ride tolerably well over most road imperfections, though the V8-equipped trims with their more rigid suspension systems fared a bit worse than their V6-carrying siblings on uneven pavement. Never, however, was the ride considered overly harsh. A bit of float on dips and peaks in the road is noticed by some reviewers, but not to the extent that it affects drivability or passenger comfort.

The entire Charger lineup features an independent, long- and short-arm front suspension, stabilizer bars, and multi-link rear suspensions. The V8-powered R/T and SRT8 trims sport a four-wheel independent suspension, as well as front and rear stabilizer bars, with the SRT8, of course, boasting a sport-tuned suspension and high-performance brakes. The Base and SXT RWD trims mount 17-inch alloy wheels, the AWD SXT and R/T trims sport 18-inch alloys, and the SRT8, in keeping with its brawny image, rolls on 20-inch chrome-clad aluminum wheels.

Nearly all reviewers agree that the 2010 Charger isn’t the most responsive automobile out there, but considering its heft, it is described as having adept stability and steering feel on the highway, with the SRT8 garnering special praise from one reviewer for its road-hugging qualities. Braking is considered better-than-adequate, with one review timing a V8-equipped Charger at 0-60-0 in less than 17 seconds. Pedal feel, however, needs some tweaking, according to a number of reviewers.

The 2010 Charger Base (SE) offers a commendable number of standard creature comforts, including front cloth bucket seats, power windows, door locks, and mirrors, cruise control, telescoping tilt-wheel steering, center and overhead storage consoles, air conditioning, front and rear floor mats, keyless entry, and a single-CD player with 66 watts of power and four speakers. About the only option available for the Base Charger is ESP traction and stability control.

The Charger SXT adds split-folding rear seatbacks, an eight-way power-adjustable driver’s seat, power-adjustable pedals, heated mirrors, and satellite radio. Six Boston Acoustics speakers, 276 watts of audio power, 18-inch aluminum wheels, and leather-trimmed upholstery are available to the SXT when the Customer Preference Package is selected, while a power sunroof and Sirius back-seat video entertainment are available as stand-alone options. A number of suspension and appearance options can also turn the SXT into a mean-looking machine.

Additional standard amenities with the R/T trim include the SXT’s Customer Preference Package plus dual-zone climate control, as well as a performance exhaust system and 18-inch aluminum wheels. Options include Bluetooth technology, touch-screen DVD navigation, and upgraded audio components, all available with the SXT trim as well. Additionally, a number of track-friendly suspension and steering upgrades are available that allow the R/T to live up to its Road/Track heritage. The SRT8, meanwhile, is equipped similarly to the R/T with the added benefit of suede-accented sport front bucket seats, remote start, and a universal garage door opener. HID headlights and a Kicker Premium Audio system are a sampling of the flagship trim’s available options.

Reviewers note the roominess of the Charger's cabin, its user-amenable gauges and controls, as well as, of course, the muted thunder of the V8 engines. A few reviewers voiced minor complaints regarding the steering wheel blocking a gauge or two and the placing of one or two buttons too low on the dash for comfort. Interior materials and workmanship are described by several reviewers as adequate for the price, with one judging the Charger’s cabin a notch below the Chrysler 300's.

For some reason, Chrysler has decided to remove the dual front side-mounted airbags from a number of its vehicles, including the 2010 Dodge Charger. This has resulted in the Charger receiving less than stellar side-impact safety scores in various government testing. The Base Charger, meanwhile, lacks standard antilock brakes (ABS) as well as traction and stability control, though both are optional. Front and rear head airbags, however, are standard across the lineup. All other Charger trims do offer four-wheel ABS and traction and stability control. Front fog/driving lights are also standard with the R/T and SRT8, while auto-delay-off, dusk-sensing headlights are standard only on the SRT8.

Despite losing its front side-mounted airbags, the 2010 Charger earned five stars for front and side impact protection, and four stars for rollover protection from the National Highway Traffic Safety Administration (NHTSA). The Insurance Institute for Highway Safety (IIHS) agrees with its counterpart about front impact protection, awarding the Charger its highest rating of “good.” The IIHS, however, diverges in its assessment of side-impact safety with the awarding of its second poorest rating of “marginal.” 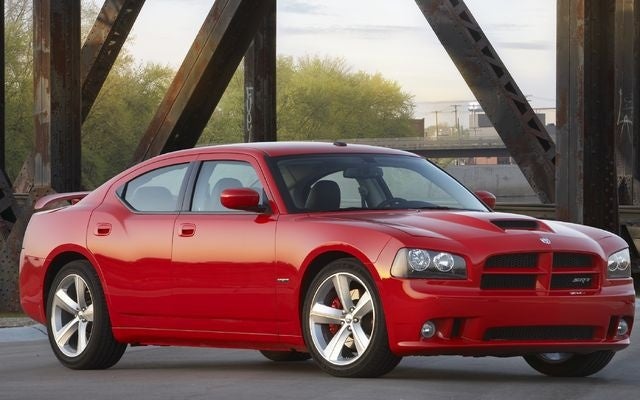 Owners of the 2010 Dodge Charger are obviously taken with its sheer muscle, retro look, and, perhaps, a bit of nostalgia for the Duke clan of Hazzard County. There are a few things, however, that draw some negative comments, among them, the poor performance, both in acceleration and fuel economy, of the base 2.7-liter V6. The 3.5-liter V6 is also disparaged by some owners for less-than adequate performance. The base four-speed automatic transmission draws complaints for its elderly design and clunky performance. Steering feel is an issue with some owners, though more as an annoyance than as a driving defect. Many owners are unimpressed with the Charger’s weight, feeling its heft detracts from both performance and handling. Poor seats, allowing for too much slipping and sliding, are mentioned as a nuisance by a few owners, while difficult entry and exit though the rear doors is a problem for others.

Decent handling, an aggressive look, and powerful brakes are among the 2010 Charger’s endowments that draw salutations from owners, with its roomy cabin also drawing kudos. Both the Boston Acoustics and Kicker premium audio systems are considered de rigor for many owners, as is a reasonably spacious rear seat area. Ride comfort, an easy-to-use optional DVD navigation system, and four-door convenience also impress numerous owners. Finally, of course, there are the nearly obligatory owner commendations to Dodge for the throaty roar of a good ol’ American V8.

Users ranked 2010 Dodge Charger against other cars which they drove/owned. Each ranking was based on 9 categories. Here is the summary of top rankings.

Have you driven a 2010 Dodge Charger?
Rank This Car

Why Is My Ac Not Cold?

I have a 2010 dodge charger 3.5l my freon is good my compressor is turning my radiator fan is good but my ac is still not cold any suggestions???

One mechanic quoted me a price to replace timing belt and change water pump at the same time. Firestone told me I had a timing chain and did not have to worry about changing water pump either. Who...

Makes A Loud Ticking Noise When In Idle

it makes noise like a ticking sound kind of loud but not that loud when I drive and when it's in idle but every time I do a oil change with oil treatment lifter noise stops after 200 miles or so it...