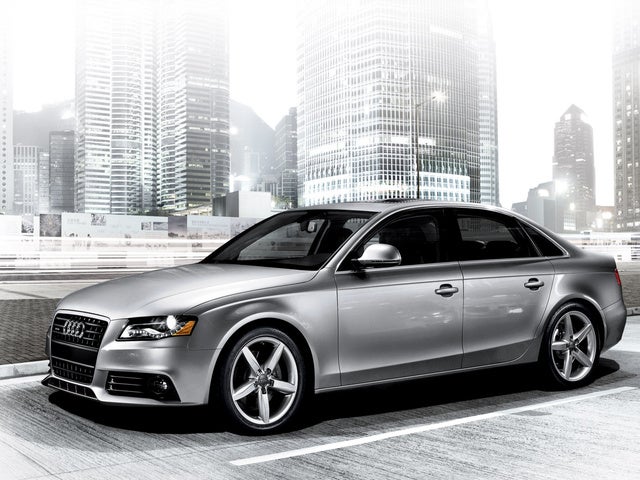 The 2010 Audi A4 luxury sedan continues to set the standard for its class when it comes to fuel economy, and offers a wide range of cutting-edge technical features, as well as a distinctive exterior, a sport-tuned suspension, and a comfortable interior.

Some owners still find the A4's tightly sprung ride too harsh, especially over rough roads, and many owners who prefer a powerful engine under the hood might find the 2010 A4's sole turbocharged four-cylinder powerplant a little underwhelming. 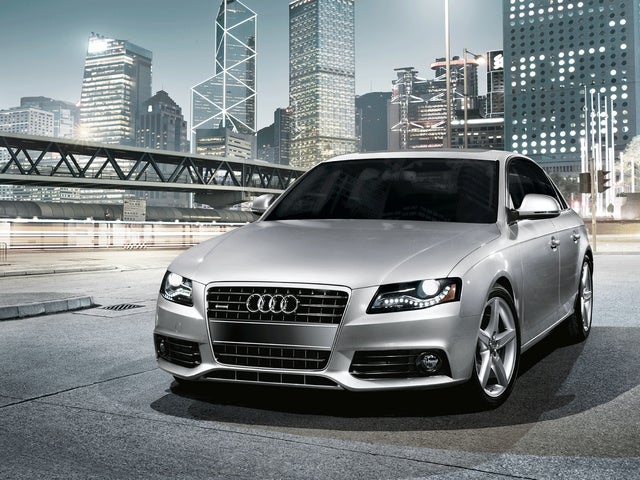 Audi makes only minor tweaks to the A4 for 2010, but for the time being the capable sedan has earned the right to cruise on its well-deserved laurels, and holds its own against similar entry-level luxury sedans such as the Mercedes-Benz C-Class and the BMW 3 Series.

After giving the A4 a design refresh in 2009, Audi makes only minor updates to its entry-level luxury sedan for 2010. The automaker debuts a third-generation version of the A4's MMI (Multimedia Interface), which makes it easier for drivers to manage the sedan's audio, climate control, and navigation systems, as well as other interior and exterior systems, thanks to a revamped interface with revised control logic. All A4 sedans include a base version of the MMI, while the newly updated version with navigation comes standard only with the A4's optional Prestige package, and is available as an add-on with the optional Premium Plus package. Audi also adds a number of new options and features to the A4's base Premium trim as well as to the optional Premium Plus and Prestige packages. The automaker now offers Bluetooth as an option on the base A4, for instance, and LED taillights now come standard with both the Premium Plus and Prestige packages.

Audi offers the A4 in only two trims for 2010, since in a nod toward energy efficiency, the automaker has discontinued trims with the previous year's 265-hp, 3.2-liter six-cylinder engine. Instead, this year Audi offers only a turbocharged 2.0-liter four-cylinder engine, which debuted in 2009. Exterior updates introduced in 2009 remain unchanged for 2010, and include the A4's long hood, short body overhangs, and overall sculpted yet sporty appearance. The distinctive deep-mouthed Audi Singleframe grille also remains. The 2010 A4 has a wide, low stance, so it feels firmly planted to the ground, and features an aerodynamic shape, which ensures low wind resistance and helps improve fuel efficiency. 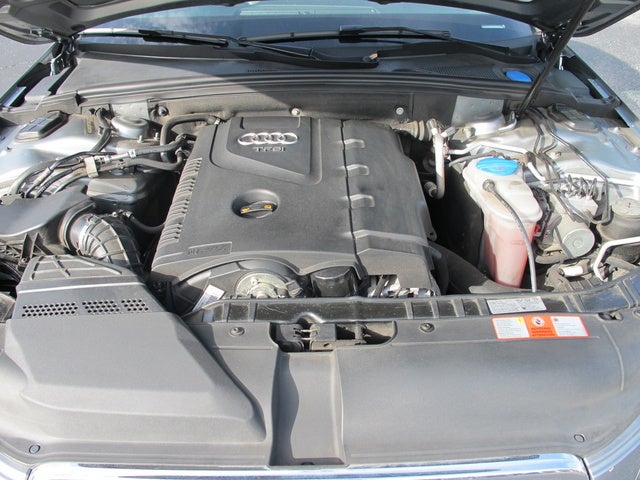 A turbocharged, 211-hp FSI four-cylinder engine powers both the 2010 Audi A4 2.0T Premium and the Audi A4 2.0T Quattro Premium trims for 2010. The engine, which employs FSI direct injection technology, generates 258 lb-ft of torque for aggressive acceleration and passing performance. It links to a Multitronic Continuously Variable Transmission (CVT) in the 2.0T Premium trim, which features the FrontTrak front-wheel-drive system. In the 2.0T Quattro Premium, which comes equipped with the Audi's Quattro permanent all-wheel-drive system, the engine mates to a six-speed manual transmission. In addition, owners can add an available Tiptronic automatic transmission with a manual-shift feature to both trims. A Dynamic Shift Program, which comes standard with the CVT and Tiptronic transmissions, helps to reduce the driver's workload in stop-and-go traffic by automatically adapting shift patterns to fit the situation. 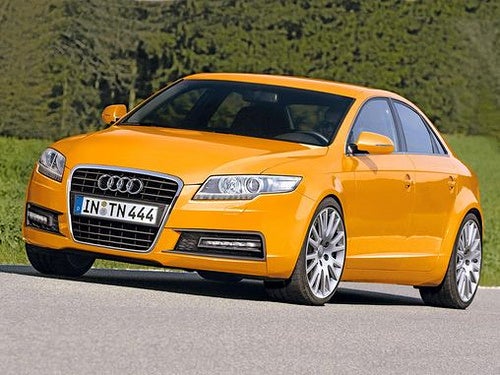 Audi reconfigured the A4's platform in 2009, moving the engine back behind the front axle to improve weight distribution and handling. In addition, Audi tweaked the A4's Servotronic steering system for a tighter, more responsive feel. These updates carry over for 2010, ensuring good balance and precise handling on even the twistiest roads and in the tightest corners. In addition, the A4 exhibits minimal body lean in corners. Audi tuned the A4's suspension for a firm ride, although some passengers may find the ride a bit harsh on rough road surfaces.

Audi offers Drive Select as an option with the Prestige package. The Drive Select system enables drivers to choose from Comfort, Dynamic, and Auto settings, which make adjustments to the engine, transmission, and suspension. The Comfort mode provides smoother shifting and a softer ride, while the Dynamic mode offers drivers a tighter, sportier feel that communicates more of the road feel. The Auto setting finds a common place between the two other modes.

Passengers will have no complaints about the comfort of the A4's cabin and seating over long distances. Audi redesigned the seats for greater comfort in 2009, and stretched the length of the A4 to ensure plenty of legroom, especially for rear-seat passengers. The A4 comes standard with 17-inch wheels, although owners can add up to 19-inch wheels, depending on the options package selected.

The Premium Plus and Prestige packages add heated front seats, three-zone automatic climate control, Bluetooth, and a driver information system that tracks fuel economy in real time, among other features, while the Prestige package also adds a Bang & Olufsen audio system and a voice-activated navigation system with a 7-inch color LCD screen and a 40-gigabyte hard drive. In addition, the audio system features the latest-generation NVIDIA processor, which enhances graphics and enables the system to display 3D landscape images.

The 2009 Audi A4 received a five-star safety rating (the highest available) from the National Highway Traffic Safety Administration for protecting passengers in frontal, side, and rollover crashes, and the 2010 A4 should receive a similar rating, since its safety systems remain unchanged from '09. Reinforced high-strength steel, reinforced bumpers, and a rigid occupant cell help keep passengers safe. In addition, the A4 comes equipped with a full range of airbags, including Sideguard head-protection airbags, which cover the windows in the event of an accident.

Other standard safety features include Audi's Backguard system, which adjusts seats and headrests to protect occupants in the event the car is struck from the rear. In addition, owners who opt for the Prestige level upgrade can add an optional Driver Assist Package. It includes an Audi parking system, which alerts drivers using audible tones indicating the distance to an obstacle when parking, and Audi side assist, which monitors the driver's blind spots and notifies the driver via an LED light when a car enters that spot.

The Audi A4's handling, performance, and gas mileage all get positive reviews from owners. In particular, owners give good marks to the A4's turbocharged 2.0-liter four-cylinder engine, which provides decent acceleration as well as good gas mileage. However, some owners would like to see more horsepower for the A4. The cabin does a good job of blocking out road noise, ensuring a quiet, comfortable ride. Many owners like the sport-tuned suspension, although some find it a bit too firm and harsh, especially over rough surfaces. The fold-down rear seats, which expand cargo space, also receive positive comments from owners.

Users ranked 2010 Audi A4 against other cars which they drove/owned. Each ranking was based on 9 categories. Here is the summary of top rankings.

Guru1PYHT asked a 2010 Audi A4 2.0T FrontTrak FWD Maintenance & Repair question about a month ago

New starter, New battery, and it still won't start. It tries everything cuts on but it just won't crank for some reason can anybody tell me why?

Car had little bit of power loss before. Would take a little bit longer to start. Couple days later tried to start and it wouldn't even attempt. All lights and radio will turn on but no motor. A mecha...

Audi No Power When Acceleration, Now Will Not Start

My Audi for the pass week has been running like crap. I changed coils spark plugs camshaft sensor crankshaft sensor, cleaned maf sensor, new air filter. And when I start the car I have to hold the...

GuruH13PM asked a 2010 Audi A4 2.0T FrontTrak FWD Maintenance & Repair question about a year ago