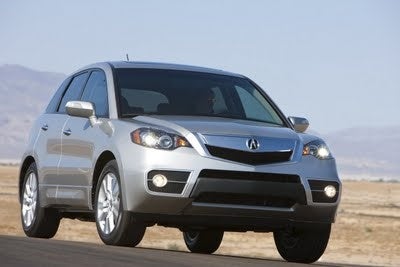 The Acura RDX compact crossover SUV receives a number of exterior updates for 2010, which give it a freshened, more aggressive look. New exterior features include a revised front fascia with functional openings designed to feed air into the radiator and turbocharger, an angular grille with Acura's signature chrome bar “plenum," a new front edge design on the RDX's low hood, and a smoke-style chrome plating treatment for the xenon high-intensity headlights, which are now controlled by an automatic on/off function. The RDX also receives new rectangular exhaust tips, satin trim accents, revised taillights, and new 18-inch aluminum wheels for 2010.

In addition, for the first time in 2010, Acura offers the RDX in front-wheel-drive trims, in addition to the all-wheel-drive versions offered in previous years. Because of the reduced weight of the front-wheel-drive trims, they manage better fuel economy and cost less than the all-wheel-drive trims, according to Acura. In addition, Acura added to the RDX's standard equipment list for 2010. New standard features include a rear-view camera, an electronic compass, and ambient footwell lighting. The center console now comes equipped with a storage tray, and a new USB port enables connections for an iPhone, iPod, or USB memory stick. Finally, Acura upgraded the RDX's braking system for 2010, so it provides a better feel and improved durability, according to the automaker.

Now in its fourth year in production, the Acura RDX comes in four trims for 2010. In addition to the base front-wheel-drive trim and the base SH-AWD trim, which comes equipped with Acura's Super-Handling All-Wheel-Drive (SH-AWD) system, the RDX is available with the Technology Package, in both front-wheel- and all-wheel-drive trims. The Technology package adds an Acura navigation system with voice recognition, a rearview camera, and a GPS-linked, solar-sensing automatic climate control system. The RDX Tech trims also come equipped with the AcuraLink satellite communication system with real-time traffic and an upgraded 10-speaker Acura/ELS surround-sound audio system with a 6-CD changer.

Safety features for the RDX include dual-stage front airbags, front side airbags, and full-length side curtain airbags. In addition, the RDX comes equipped with four-wheel antilock brakes with brake assist and a Vehicle Stability Assist system with traction control, which helps the driver maintain control of the vehicle in tight turns or slippery road conditions.

Have you driven a 2010 Acura RDX?
Rank This Car

Does A 2010 Acura Rdx Have A Timing Belt Or A Timing Chain?