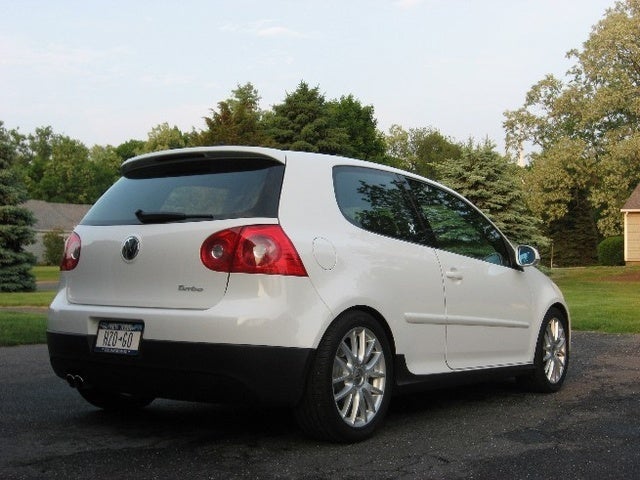 With plenty of power and performance in a deceptively small package, the versatile 2009 Volkswagen Rabbit hatchback also packs in a long list of standard features.

The '09 Rabbit's fuel economy ranks below most of the rest of the vehicles in its segment, and the small back seat does not accommodate average-size adults.

The 2009 Rabbit lives up to its namesake's characteristic speed by delivering a tight and sporty ride just a notch below that of the GTI. A well thought out interior, full of high-end features and quality materials not normally seen in hatchbacks, keeps passengers surprisingly comfortable. The downsides come on the financial end, in terms of poor fuel economy and costly options.

For some reason the Volkswagen Rabbit (called the Golf in Europe) has never attained the popularity in America of, say, the MAZDA3, even though it packs a lot more power and its German engineering delivers a nimble and fun drive. Though not particularly inexpensive for its size (but comparable to most compacts in its segment), the 2009 Volkswagen Rabbit does offer a host of features and high-quality materials inside and out.

The versatile front-wheel-drive hatchback comes in one S trim in either a two- or four-door configuration. Built on a Jetta platform, the 2009 Rabbit offers solid German engineering with satisfying GTI-like power. But it's also a practical city car, nimble in tight spots and offering the cargo utility of a small wagon.

The Rabbit returns with minor changes for 2009. Both two- and four-door versions now come equipped with standard stability control, and the 5-speed manual transmission is no longer offered on four-door models, replaced by a new 6-speed automatic. The five-cylinder engine remains its same powerful self. Riding on 15-inch wheels, with the option to add 16-inch ones, the '09 Rabbit comes well-equipped, but is pricey for a compact car. However, those extra bucks get you standard power features, high-quality cabin materials, and either a single or 6-CD player, depending on the door configuration.

With its significant power boost over other compacts, flexible cargo and seating arrangement, and agile handling, it's easy to see why the 2009 Rabbit (Golf) is the second most popular car in Europe. Why it has yet to make a mark in the U.S. remains a mystery. 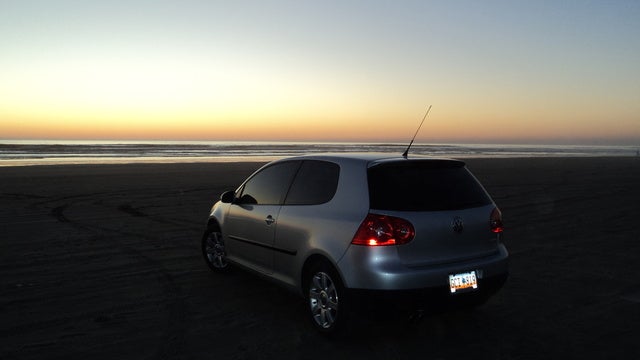 One engine powers the 2009 Rabbit, but critics and owners agree it's a doozy. Hitting the road with 170 hp and 177 lb-ft of torque, the 2.5-liter inline-five engine provides plenty of acceleration performance, making it one of the most powerful compact hatchbacks on the market. The downside? Less than stellar fuel economy, at 22/30 mpg. The two-door comes with either a 5-speed manual or optional 6-speed Tiptronic shiftable automatic, while the four-door comes standard only with the 6-speed.

Don't let its econobox looks fool you. Though lacking the sporty performance of the GTI, the Rabbit displays good off-the-line acceleration in test drives and zips around city roads with the agile moves of, well, a certain lupine creature. While it takes only regular gas, the Rabbit does suffer in the fuel efficiency department. Critics and owners feel its mileage ratings could be improved to match those of the Japanese compacts. However, few of them are willing to trade in a few points of the satisfying horsepower to achieve this goal. The European version does offer better fuel economy, with reduced environmental impact (oh, and less power), in the form of a clean-diesel 2.0 TDI trim.

Test drives reveal the Rabbit's quality German engineering provides a stable yet agile ride, with responsive steering and instant acceleration. Its small size translates into easy maneuverability, exhibiting a turning circle of 35.7 feet. The firm suspension adds extra stability and a solid feel to the Rabbit without becoming too harsh on rougher roads. Brakes respond quickly in test drives, but some owners report a certain sponginess.

Critics find the steering wheel nicely weighted for a compact car, adding a more direct feel to the sporty driving dynamics of the 2009 Rabbit. For good road-driver interaction, potential buyers may want to opt for the two-door model, as it is now the only one to offer a manual transmission. Both powertrains behave smoothly and quietly, particularly the new 6-speed automatic, although one test drive reveals slow downshifting in this transmission. Road and tire noise can be an issue, and some critics mention annoying engine whine above 4,000 RPM. 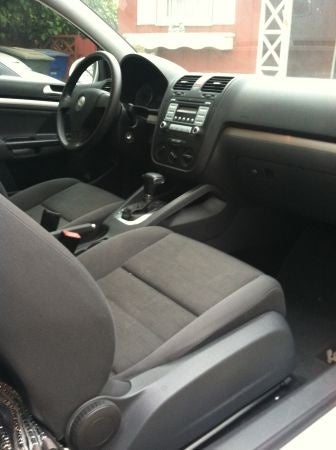 Most owners of the 2009 Rabbit claim it's bigger inside than it looks, with generous legroom and seat comfort up front. Drivers get 41 inches to stretch out their legs, along with a 6-way manually adjustable seat (including height adjustment) and tilt and telescopic steering. The four-door model boosts the settings to 8 and adds a power recline and lumbar feature. The dash layout offers simple and large controls, outlined in cool blue lighting. Owners appreciate its well-designed ergonomics, but wish the two-door came with the front and rear armrests found in the four-door.

Rear passengers don't fare nearly as well. Legroom measures only 35 inches in both two- and four-door models. Although this is actually respectable for a compact, anyone but a child or small adult will feel the pinch on longer car trips. Headroom overall also suffers, with less than 40 inches, and adding the optional sunroof reduces the ceiling height even further. According to one test drive, entry to the rear seats in two-door models can require some contortionist training, and one critic finds the front seats hard to slide forward for back seat access.

Rear seats split-fold 60/40, but annoyingly do not fold completely flat in this hatchback. The cargo area starts out at 15 cubic feet – impressive for a compact. With the seats down, it grows to 46 cubic feet. Tiedowns, grocery-bag hooks, and a cargo organizer add further convenience. Interior storage remains adequate, but not overly abundant, except for the large glovebox.

Drivers remain pleased with the 2009 Rabbit's list of standard equipment, which surpasses most entry-level compacts and almost justifies its higher pricetag. Full of “hidden features,” according to several owners, the 2009 Rabbit offers power windows, locks, and heated mirrors, cruise control, remote entry, and a crowd-pleasing 10-speaker sound system with a CD player and MP3 jack. Choosing the four-door gets you heated seats (optional for the two-door), heated washer fluid, velour upholstery, and a 6-CD changer with satellite radio. An iPod adapter can be added as an option.

The 2009 Rabbit earns four stars in rollover and frontal impact tests and five stars in side impact tests from the NHTSA. The IIHS awards it a Good rating, thanks to standard traction and stability control, 4-wheel ABS brakes with electronic brakeforce distribution, and dual front and front-side airbags with passenger cutoff and rollover sensors. Rear side curtain airbags are optional only for the four-door Rabbit. Several owners complain of a driver's side blind spot that they say could be solved by giving the hatchback larger side mirrors.

The powerplant in the little Rabbit wows most owners, who say it packs more punch than the Civic and MAZDA3. Combined with its tight turning radius and nimble maneuverability, the entire package offers plenty of spirited fun, impressing drivers as one of the sportier compacts in its class. Owners also don't mind paying a little more to get a lot more features, more than they expect from an entry-level compact. Other highlights include a roomy cabin, a high-quality and solid build, and a smooth and comfortable ride that can trick you into thinking you're going slower than you actually are.

Reviews are mixed on fuel economy, but the majority seem to agree it needs improvement. The few negative comments mention blind spots, some road noise at high speeds, and a vague steering wheel.

What's your take on the 2009 Volkswagen Rabbit?

Rick I have thoroughly enjoyed mine for the past eight years. As my Tesla Model 3 arrives tomorrow, I am reluctantly preparing to bid adieu to my 2.5l, 5-cylinder, 4-door jewel.

Have you driven a 2009 Volkswagen Rabbit?
Rank This Car

i recently purchased a volkswagen rabbit and had minimal problems until just a few days ago. My car is hard to get into first gear, there seems to be resistance when i try and put it into gear. this...

2009 Volkswagen Rabbit 2 Door Car - Front Drivers Side Seat Tends To Get In...

The bulb light lit up on the dashboard. I figured out it came on because the rear driver's side turn signal bulb was burned out. I replaced the bulb and the signal now works properly BUT the burned...