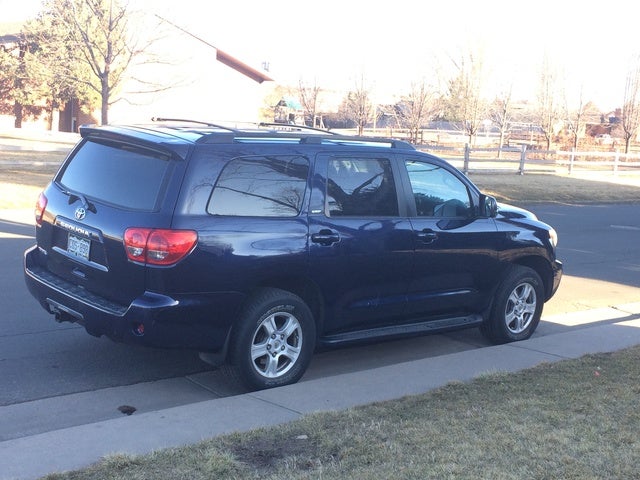 A high-end, spacious, and flexible interior doesn't hinder the ability of the 2009 Toyota Sequoia to tackle rugged tasks with ample towing power and 4WD performance.

Badly placed controls dangerously distract drivers, and moving up through the trims significantly raises the pricetag of the '09 Sequoia.

The roomy '09 Sequoia suits large families requiring top-notch towing and hauling power for boats and trailers. Its versatile seating and cargo setup accommodates multi-use functions, while its refined and tight handling keep it friendly for close-quarters city driving. In this era of high gas prices, drivers will have to decide if this full-size truck-based SUV offers more in the way of utility and space than a more economical crossover.

The Toyota Sequoia got a major overhaul in 2008, and the 2009 version returns with minor tweaks. This full-size SUV comes in both rear-wheel and all-wheel drive, capable of rugged truck-like service as well as luxury sedan-like cabin comfort. Based on the Tundra platform, it sits 4 inches longer and 2 inches wider than the previous generation and adds a double wishbone rear suspension to the one in front in an attempt to smooth out the ride and improve rear seat space.

The '09 Sequoia comes in three trims (SR5, Limited, and Platinum) with two V8 engine choices. New for 2009, the more powerful 5.7-liter V8 is now E85-compatible. Also new for 2009, a Sport Appearance Package is available for the base SR5. SR5 and Limited models ride on 18-inch wheels, while the Platinum sports 20-inchers.

The Sequoia seats up to eight in three rows of seats. Comparable to the Chevy Suburban and Ford Expedition in terms of size and horsepower, the '09 Sequoia surpasses them in its quiet ride, maneuverability, driving dynamics, and high-end interior comfort. Its 4WD system can be engaged on dry pavement and features low-range gearing for offroad performance.

This SUV seems well-suited for family trips, particularly those involving towing a trailer or small boat. Seat flexibility accommodates all sizes, and a more efficient flat-folding feature improves overall cargo room. High-quality materials, a long list of standard equipment, and easy handling offer an effortless and luxurious ride, but in those cases where you need a pickup truck's capabilities, the '09 Sequoia converts quickly to a competent workhorse.

Optional for the SR5 and standard on the Limited and Platinum is a quick-moving, fast-accelerating 5.7-liter DOHC V8. This powerful engine puts out an impressive 381 hp and 401 lb-ft of torque at 3,600 RPM and comes matched only with a 6-speed automatic with manual mode. It features dual variable valve timing in both the intake and exhaust cams, meaning that despite its larger size, it actually delivers better fuel economy than the 4.7 V8. Its numbers average 14/19 and 13/18 in the RWD and 4WD respectively. Owners and reviewers find this powertrain combo one of the quickest for a large SUV, with superior off-the-line acceleration and passing power. Toyota claims 0-60 times of 6.7 seconds, and test drives confirm this number. It also offers 10,000 pounds of maximum towing capacity. All trims come with a standard tow hitch.

In its 2008 revision, the Toyota Sequoia replaced its old solid live axle with a rear double wishbone independent suspension, with the intention of creating a smoother ride. It seems to have worked, with test drives reporting a soft car-like suspension for this fully boxed truck-based SUV. The '09 Sequoia keeps passengers comfortable by seamlessly absorbing bumps in the road, even when equipped with the larger 20-inch wheels. Both V8 engines provide good punch and operate relatively quietly even at high revs, but some owners wouldn't mind a few more ponies for extra utility. The 6-speed automatic can be slow to downshift on the highway and stutters a bit from a standing start, but otherwise shifts smoothly.

For an SUV with a curb weight of 5,680 pounds, the '09 Sequoia handles crisply and maneuvers like a smaller sedan, with one critic of the identical 2008 model calling it the most refined and drivable full-size SUV. Toyota put the steering rack and front anti-roll bar ahead of the front double wishbone suspension to create a much tighter turning radius of 39 inches. A reviewer of the 2008 model says the smaller turn circle transforms a three-point turn into a simple U-turn. All of this means that while the SUV can handle meatier tasks such as towing a large boat, it can also zip in and out of parking lots and city streets much more nimbly than most full-size SUVs. An adaptive air suspension on the Platinum (optional for other trims) adjusts ride height according to road and driving conditions.

The full-time selectable 4WD system defaults torque 40/60 to the front and rear wheels, but with a range of 30/70 to 50/50, it can be taken offroad and engaged on dry pavement. It features normal, 4Hi, and 4Lo settings and comes with a limited-slip and locking center differential for even more traction. The Sequoia offers nearly 10 inches of ground clearance and comes standard with skid plates.

Though handling is agile and easy, the '09 Sequoia does exhibit expected body lean because of its large size. This gets worse when cornering at higher speeds, and one critic feels the SUV performs a lot better in straight-line drives than on curvy roads. Steering behaves accurately, but feels light and vague. Focusing more on quiet comfort, the '09 Sequoia offers very little in the way of driver feedback. 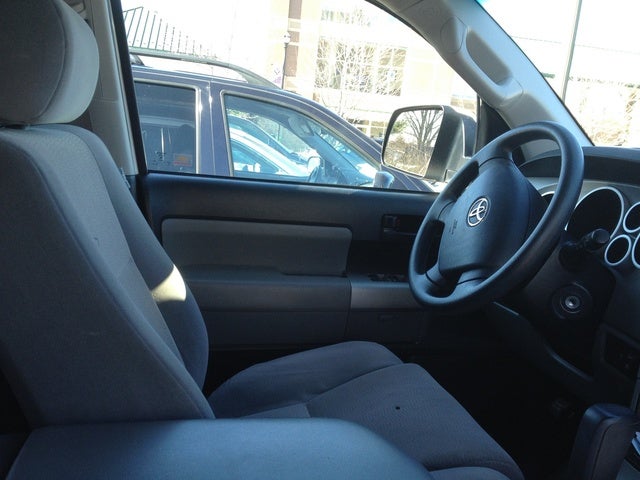 The '09 Sequoia doesn't skimp on luxury, complementing its exterior ruggedness with high-end comfort and top-quality materials for its spacious Tundra-like cabin. The SUV seats seven or eight in three rows, depending on the trim. The SR5 and Limited feature front captain's chairs, a 40/20/40 split-folding second row bench, and a 60/40 third row. The Platinum replaces the second-row bench with bucket seats and a center console (optional only for the Limited). Both bench and buckets slide fore and aft. The second and third rows recline as well, with both the Limited and Platinum boasting a power-reclining feature and a power-folding setup for the third row. A handy convenience for parents, the middle section of the second-row bench slides forward so front passengers have easier access to a child seat. The Sequoia features four child seat anchors in all.

Adding length and width to the Sequoia, as well as reconfiguring the rear suspension increases legroom for all. Though headroom can feel tight for those over 6 feet tall, leg and foot room for the first two rows is comfortable even with the seats pushed back. Front passengers gets 38 inches, and second-row inhabitants get 35 inches. The third row accommodates adults for short trips, but is best left to children. Wide doors and an easy-sliding second row improve access to the third row. However, the narrow running boards might make stepping into the SUV difficult for smaller people. Second-row passengers get their own audio and climate controls.

Both second and third rows fold flat to expand cargo capacity. Some reviewers find the seats-up cargo volume disappointing, starting at 19 cubic feet and able to hold only a few pieces of luggage. However, with each successive row down, the capacity increases to 67 and 121 cubic feet, which is 11 cubic feet more than in the equivalent Chevy and Ford models. And a roof rack on the Limited and Platinum adds extra space.

The storage versatility continues in the cabin, with plenty of overhead and center consoles, a large glovebox, seat and door pockets, and 14 cupholders. A convenient storage box now resides under the floor of the third row.

Driver comfort gets a boost from standard tilt and telescopic steering and wheel-mounted cruise control in the base SR5. The Limited adds a 10-way power driver's seat and audio controls to the steering wheel, and the Platinum includes a 4-way power passenger seat and both heated and cooled front seats. A high ride height helps with visibility, and overall views are good.

The biggest complaint, mainly from professional critics, lies in the ergonomics of the dash setup. Gauges and buttons are large and easy to read, but the dash mimics that in the Tundra, which is overcrowded and poorly laid out. Many controls sit too far from the driver, requiring leaning away from the wheel to reach them. Reviewers find the navigation system in the Platinum overly complex and also distracting.

Cabin materials feel refined and more upscale than those in many SUVs, though some drivers make a plea for wood trim and higher-grade plastics. The Base SR5 features power windows, locks, and mirrors, remote entry, triple-zone climate control, and a CD/MP3 player with MP3 input jack. The luxurious Limited adds leather upholstery, heated mirrors, a garage opener, trip computer, and 14-speaker JBL sound system with 6-CD changer. Everything else gets loaded onto the premium Platinum, including a power sunroof, heated second-row seats, a power liftgate, the navigation system with rearview camera, and a rear spoiler. Most of these are available for the Limited, and other options add a DVD player and adaptive cruise control. However, most owners and critics point out that adding options can be prohibitively expensive.

Crash test scores for the '09 Sequoia have not been reported, but the identical 2008 model scored four and five stars in frontal impact tests. The 2008 overhaul resulted in a 30% increase in body rigidity. Standard features include traction and stability control, rollover sensors, and dual-stage front, front-side, and side curtain airbags for all three rows. The 4-wheel disc and ABS brakes come with electronic brakeforce distribution and brake assist, and test drives reveal excellent stopping power and responsiveness.

A tire monitor measures pressure in the 18-inch and 20-inch wheels. Automatic headlights come standard on all trims, with foglights added to the Limited and Platinum. These last two trims also feature parking sensors, and the Platinum supplements that with a rearview camera. This helps alleviate some of the blind spots caused by a full load of passengers.

Lots of room and plenty of power characterize comments from owners of the 2009 Toyota Sequoia. The most consistent negative remains its fuel economy – average for an SUV, but not what most people are looking for at the gas pump. Owners of the similar 2008 model echo these sentiments, but add more praise for the luxurious cabin, which one driver describes as driving from the comfort of your living room recliner. 2008 owners also like its easy handling for such a large SUV. Downsides focus on the dash, both its use of cheap plastics and its lousy ergonomics.

CarGurus drivers have yet to voice their opinion on the 2009 Sequoia, but 2008 owners offer similar comments to those on other websites. A high pricetag and low fuel economy turn some people off, but ample passenger space, towing power, and agile maneuverability satisfy most owners.

What's your take on the 2009 Toyota Sequoia?

Have you driven a 2009 Toyota Sequoia?
Rank This Car

How Much Engine Does It Eat?

Is There A Release Button In The Car For The Tailgate

Hello, Can you please help me with the information on the Sequoia 2008 1.How wide is the sequoia including the side mirrows. I saw somewhere the width is 79.9 inches but this does not include the sid...