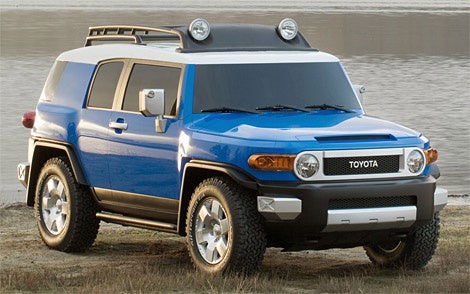 Average user score
4.3 ⁄ 5 stars
Based on 8 reviews
10/10 by Saad — Performance: Great and huge car with speed ;)! Build Quality: Strong Appearance: great and sporty look !! Cost Of Ownership: for such a huge performance this car does not cost that much !! Fun Factor:... Read more
My Perfect Car by Nader — the quality is perfect it is very very very very excellent . the performance is beautiful .the ownership is sweet and not too cheap that's what i like.it w2as sure fun to drive that car it is huge and... Read more
Buy It by Edward — Love it! A go anywhere trouble free vehicle. Great performance! Fit and finish excellent! No rattles or squeaks! Very low cost to maintain. The vehicle is fun to drive and does the perfect doughnuts,... Read more

Visibility out the back remains an annoying problem with the '09 FJ Cruiser, thanks to thick C pillars, small windows, and a large tailgate-mounted spare tire.

Where the RAV4 seems built for commuter driving, the 2009 FJ Cruiser maintains a compact profile but offers true off-road capability and outdoor-oriented utility for the more adventurous driver. A strong engine, tough transmissions, and two four-wheel drive systems equipped with low-range gearing lend an indomitable spirit to the compact SUV. A somewhat small cabin and unresolved issues with rear visibility can be minor nuisances.

With an eye to the youth, outdoor, and tuner markets, the 2009 Toyota FJ Cruiser combines utility with retro hipness. Entering its third year, this compact SUV receives minor changes, mostly to its safety equipment. These include the addition of front seat active head restraints, roll-sensing side curtain airbags, and a cut-off switch for the standard stability control. A driver's side vanity mirror is also new this year, and the Convenience Package adds an auto-dimming rearview mirror and a much-needed rearview camera to its list of options.

Competing directly with the Nissan Xterra and Honda Element, the 2009 FJ Cruiser stands out from the crowd with its love-it-or-hate-it MINI-like two-tone exterior (colored body, white roof). Based on the 4Runner platform, the compact SUV takes styling nods from the Land Cruiser and FJ40 of the 1960s, boasting a tall greenhouse, white roof, wraparound rear window, and large squared grille. Interior colors are keyed to match that of the exterior base, with three new ones (black, silver, and white) arriving for 2009.

Trims are divided into rear-wheel drive, part-time four-wheel drive with an automatic transmission, and full-time four-wheel drive with a manual transmission, but otherwise offer the exact same features and engine. The rugged two-door SUV seats four and features such outdoor-friendly accessories as a washable floor, fold-flat front and rear seats, and water-resistant fabric. But it also transitions well from weekend adventurer to comfortable in-town hauler, packed with many of the modern conveniences and creature comforts found in most SUVs today. 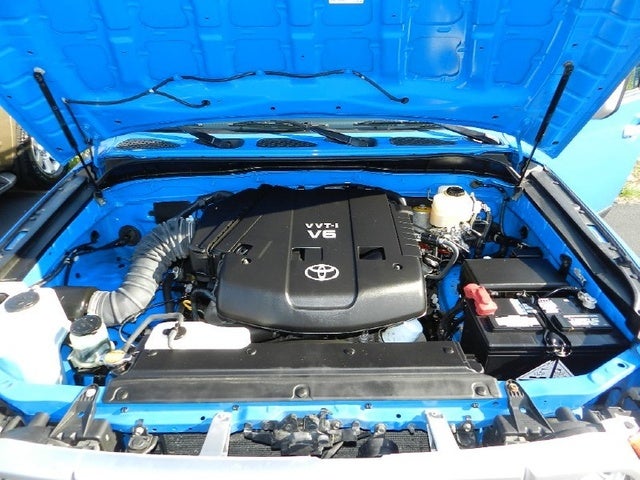 The 24-valve, 4.0-liter DOHC V6 delivers 239 hp and 278 lb-ft of torque at a nicely low 3,700 RPM. One test drive clocks 0-60 in 7.2 seconds, and the SUV can tow up to 5,000 pounds. Variable valve timing improves fuel economy, but the FJ Cruiser is still an SUV with mileage numbers hovering around a disappointing 16/19 city/highway. Rear-wheel and part-time four-wheel-drive versions receive a five-speed adaptive automatic transmission, while the full-time four-wheel drive comes equipped with a six-speed manual.

Early professional reviews find the V6 plenty powerful for both on- and off-road performance, although the weight of the heavier 4WD versions cause the engine to struggle a bit on uphill climbs and in highway passing situations. Both transmissions behave smoothly and responsively, with good throttle response and lots of low-end torque for rough terrain.

Built solidly like a truck, and borrowing from the Toyota 4Runner's body-on-frame design, the '09 FJ Cruiser rides on a fully independent double wishbone front and solid live axle rear suspension, supported by 17-inch wheels with all-terrain tires. For those wanting a smoother in-town ride, smaller 16-inch wheels can be substituted at an extra cost.

Both the full- and part-time 4WD systems default to a 50/50 torque split, but can deliver as much as a 40/60 torque split between the front and rear wheels. Low-range gearing allows for superior off-road use. Standard skid plates and 9.6 inches of ground clearance protect the underside when taking the Cruiser over rugged back roads. RWD and part-time 4WD versions feature a limited-slip rear differential, while the full-time 4WD gets a locking rear differential. The part-time version, paired only with an automatic transmission, cannot be engaged on dry pavement like the full-time system. The full-time version also features a two-speed transfer case. All test drives and all owners agree on the outstanding performance and capability of the 4WD, with one driver calling it “fearless.”

The firm yet forgiving suspension manages to minimize most jolts on off-road surfaces and absorbs routine city street bumps well, keeping passengers relatively comfortable in any situation. Solid handling and easy maneuverability get help from the Cruiser's short wheelbase, while test drives reveal strong and confident brakes. Steering stands out as a disappointment, feeling a bit too light and unresponsive to several critics. Its short wheelbase and tall tires tend to cause some body lean during high-speed turns, and several reviews suggest taking corners at very slow speeds. Tire and engine noise are kept to a comfortable minimum, but wind noise does start to intrude during highway driving.

Slightly larger than the RAV4, the compact '09 FJ Cruiser seats four in two rows. Instead of four full-size doors, the Cruiser features two regular ones in front and reverse-hinged suicide doors for rear passengers. Some critics say that despite the fact that the doors open 90 degrees, access to the cramped second row can be difficult. The front row does not slide forward. Rear seats might best be suited to small children or pets, as they offer only 31 inches of legroom, compared to the spacious 42 inches up front. Six-foot tall drivers will be plenty comfortable, and headroom is spacious throughout the cabin, starting at 41 inches up front and losing an inch in the back.

Rear seats split-fold 60/40 and sit up stadium-style to give all passengers good visibility of the rough roads ahead. The seats can also be removed. Either process requires flipping up the seat cushion and then folding the seat back down. While the front seats feel comfortable and supportive, test drives mention a flat and unsupportive rear bench can be bothersome on long rides. Coupled with the tight leg and foot room, drivers may want to reserve this area for cargo.

Comparable to the rest of the class, the cargo bay holds anywhere from 27.9 to 67 cubic feet. The tailgate opens to the side, separately from the rear window. The FJ Cruiser comes prepared for outdoor abuse, with its water-resistant seat fabric and washable flooring. A roof rack can be added as an option.

A center stack contains all the controls, which are big enough to ease legibility and operation. Upscale faux metal trim outlines the gauges, and though the SUV makes generous use of plastics, critics say the soft-touch surfaces and quality materials do not make the cabin look or feel cheap. Owners can add a dash of retro flair to the dash by choosing three separate dash-top modules that contain a compass, temperature display, and a handy inclinometer. Drivers sit surprisingly low for an SUV, and visibility is hampered by a narrow windshield and small rear window, as well as the thick C pillars and spare tire. The steering wheel tilts, but does not telescope. Wheel-mounted controls are optional, along with power mirrors, but power-adjustable front seats are not available.

The interior of the FJ Cruiser comes sparsely equipped, but should have enough for the Cruiser's target driver – outdoor adventure types, rather than high-end soccer moms. Power windows and locks, a tachometer, intermittent wipers, and a 6-speaker CD/MP3 player with MP3 input jack are all standard. Upgrades add either an 8- or 9-speaker sound system with a 6-CD changer, cruise control, remote entry, and leather trim for the steering wheel and shifter. Many off-the-shelf products are available for the tuner market.

The 2009 FJ Cruiser earns five stars in driver's front impact and all side impact categories, four stars in front passenger tests, but only three stars in rollover tests. It also gets a Good rating from the Insurance Institute. Adding front active head restraints and rollover sensors in the side curtain airbags offers further protection in collisions. Already standard on the SUV are dual-stage front-side airbags with passenger deactivation, and side curtain airbags for both rows.

The standard STAR Safety System includes traction and stability control, 4-wheel disc and ABS brakes, emergency brake assist, and electronic brakeforce distribution. A tire monitor keeps track of pressure in the 17-inch wheels with all-terrain tires. To help with road grip, RWD and part-time 4WD trims get a rear limited-slip differential, while the full-time 4WD features a center limited-slip and rear locking differential. Options add a rear camera and backup sensors to help combat the incredibly poor visibility out the back window.

Owners of the 2009 FJ Cruiser love its off-road performance, finding it both hardcore and unafraid to tackle any terrain, and able to navigate bumps and ruts smoothly, with little harshness interfering with the cabin's ride. Drivers also note that the SUV transitions nicely to city driving with its good V6 power, comfortable interior, and roomy front seat. Many owners who use the FJ Cruiser for outdoor activity appreciate the utilitarian nature of the cargo area, removable and washable floor mats, and easy-to-clean interior. Its unique looks also earn high marks. The lack of a sunroof and full-size rear passenger doors sit on the list of complaints, and almost everyone agrees that the rear visibility remains a major drawback.

Early reviews from CarGurus drivers echo the praise for off-road capability, helped by the superior 4WD system and large ground clearance. Despite its rugged behavior, the FJ Cruiser surprises drivers with its smooth driveability and easy comfort, even on long trips. The Toyota reputation for reliability also is a strong selling point.

What's your take on the 2009 Toyota FJ Cruiser?

Have you driven a 2009 Toyota FJ Cruiser?
Rank This Car