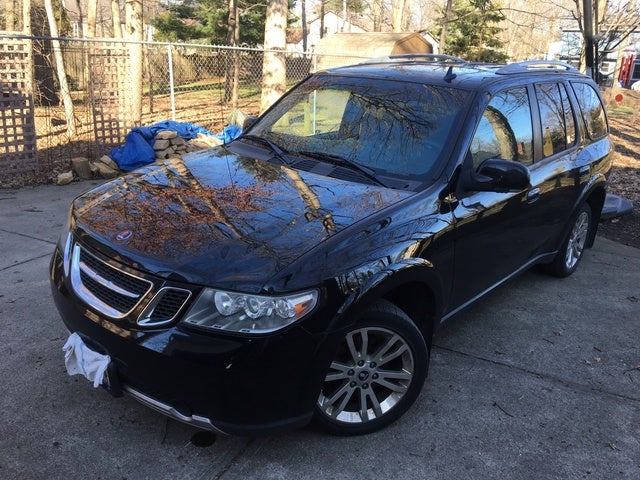 Rumor has it that 2009 will be the last year for the Saab 9-7X. Since its absorption into the GM fold, Saab has lost much of its unique character, and this midsize, 5-passenger SUV proves no different. It shares its platform and much of its mechanics with the GMC Envoy and Chevy Trailblazer, but adds traditional European touches, such as the Saab front grille, the refined leather and wood interior, and Saab's signature center-console-mounted ignition. The SUV also offers a specially tuned suspension and lower ride height that improve driving dynamics over its GM siblings.

Because the 2009 9-7X may be bidding the road adieu, the few changes for this year add two new colors, optional Bluetooth, and optional chrome-trimmed black side steps. All three trims return for 2009. The 4.2i features a 4.2-liter inline-six that puts out 285 hp and 276 lb-ft of torque, with mileage averaging 14/20 mpg. The 5.3i comes with a Vortec V8 equipped with cylinder deactivation. This means that although it delivers 300 hp and 321 lb-ft of torque, it achieves the same fuel economy ratings as the six-banger. The performance-oriented Aero boosts the engine to a 6.0-liter V8 with 390 hp and 395 lb-ft of torque, but mileage drastically drops to 12/16 mpg. All engines come with a 4-speed automatic transmission with overdrive, with the Aero getting a heavy-duty version.

Featuring automatic all-wheel drive with a limited-slip rear differential and a self-leveling front independent suspension, the 9-7X provides a sportier ride than the Envoy and Trailblazer. Responsive brakes, precise weighted steering, and superior off-the-line acceleration from all engines add to the superior driving dynamics. The sportier Aero boosts the 18-inch alloy wheels to 20 inches and adds larger brakes and shocks, a sport-tuned suspension, and Aero-badged leather seats and floor mats.

For those using the SUV as a family hauler rather than a sports car, the 2009 9-7X earns a mixed bag of stars in crash tests, with three and four stars up front and five stars for side impact. ABS brakes, traction and stability control, dual front-side and side curtain airbags for both rows, and rollover sensors are all standard. Other safety equipment includes OnStar and automatic headlights.

The 2009 Saab 9-7X seats five in two rows, with 60/40 split-folding rear seats aided by automatic retractable headrests. Cabin space earns high marks from owners, with plenty of head and legroom for both rows. The cargo bay expands from 40 to 80 cubic feet and comes with tiedowns and a cover. Roof rails are also standard. All trims feature heated power front seats, leather upholstery, a moonroof, a 6-CD changer with Bose sound system, wheel-mounted cruise and audio controls, and second-row audio controls. The 5.3i adds xenon headlights and power-adjustable pedals, both available as options for the 4.2i. Other options include a navigation system and DVD player.

Owners and critics of the 2009 Saab 9-7X highlight its confident power and acceleration, fun drive, European styling, and roomy interior. Its firm suspension maintains a smooth and comfortable ride, and the 9-7X remains one of the quieter SUVs on the road, with little wind and tire intrusion. Some drawbacks include limited rear visibility caused by the rear headrests and thick roof pillars, and the disappointing use of GM plastics, which otherwise mar the refined interior. The lack of a 5- or 6-speed transmission seems outdated, and the six-cylinder engine can be noisy at high revs.

headlights and sentinel not working in normal position. Replaced high beam relay and lights do work at the fog lights setting but not the other settings also replace the master relay same thing

I Cant Get The Dome Lights To Go Off Ive Tried Everything Is There Anyone W...